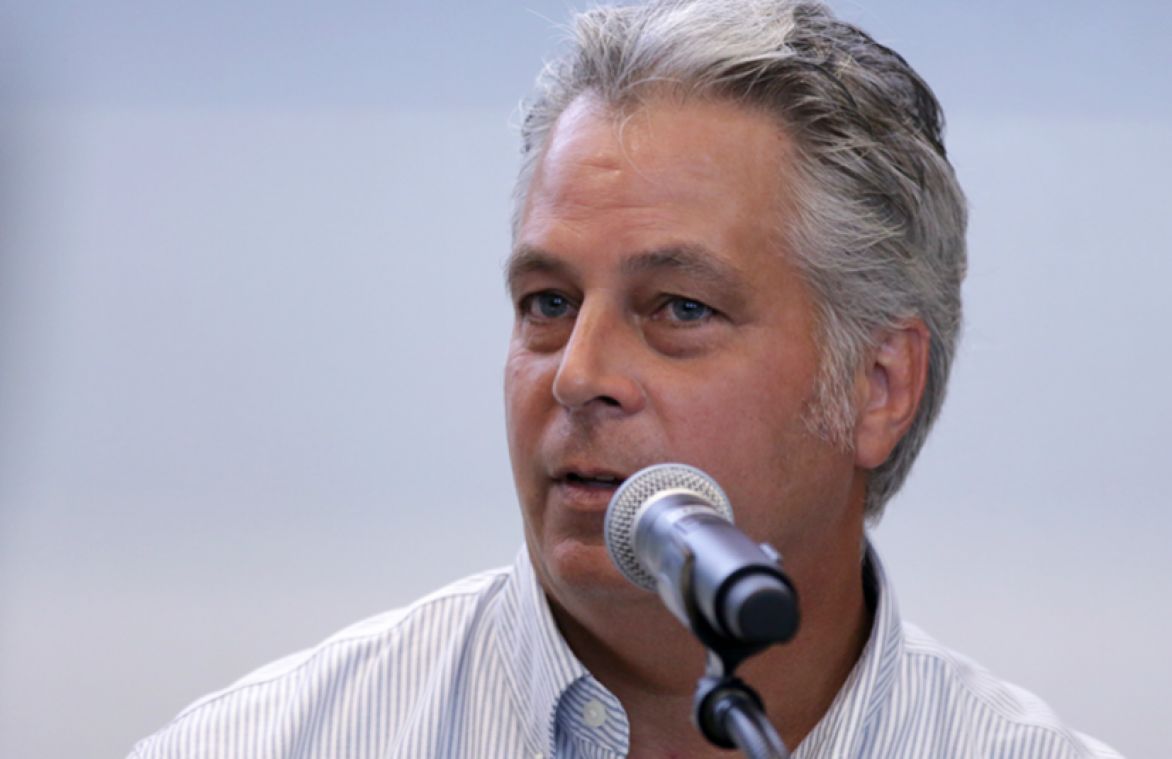 It is hard to find anyone in West Virginia who doesn't know someone who has been affected by the opioid crisis, said Eric Eyre, a reporter for the Charleston Gazette-Mail who won the 2017 Pulitzer in Investigative Reporting for his work covering the opioid crisis there.

Eyre and his newspaper's lawyer Pat McGinley gave a presentation to students and faculty at Middle Tennessee State University on Sept. 28. They shared how the news organization uncovered and published statistics that showed how drug distsributors flooded top-overdose counties in their state with opioids. It was the first time in the United States that such information had ever become public, and their stories prompted state changes in regulation. The event was hosted by the John Seigenthaler Chair of Excellence in First Amendment Studies.

An excerpt from a story by Andrew Wigdor, a reporter for MTSU's college newspaper, Sidelines: (Read the full story here)

“It’s just been a tremendous impact on the state,” Eyre said. “We had 880 drug overdose deaths last year … The number keeps going up. They’re still counting it from the previous year. It’s hard to find somebody in the state that doesn’t know somebody that’s been affected. We had heroin dealers move in right next (to us). We lived in a nice neighborhood in Charleston. They were there for like two years.”

According to data by the Centers for Disease Control, West Virginia holds the highest drug overdose-related death rate in the nation. An analysis published by the West Virginia Health Statistics Center in February displays that at least 844 people in West Virginia died of drug overdoses in 2016, which is a 13 percent increase over the amount who died in 2015. 703 of the reported drug overdose deaths involved at least one opioid.

“It splits apart families,” Eyre said. “I think we have the highest rate of grandparents raising their grandchildren because their parents died of overdoses.”

A Washington Post article showed that West Virginia’s indigent burial program, which provides burial assistance to needy families, was overwhelmed by the amount of deaths in the state and was out of money four months before the end of the fiscal year in 2017. West Virginia funeral directors claimed that the state’s drug overdose epidemic was partially to blame.

“You’ve got first responders, like the paramedics, who are just flat worn out,” Eyre said. “They’re going back to the same houses to revive people two or three times in the same day … There doesn’t seem to be any solutions or waning in sight.”

According to Eyre, there were 26 overdoses in four hours last August in Cabell County, West Virginia.

“We had known there had been stories of pill mills,” Eyre said. “They were in small towns, and they were like these pseudo-doctor’s offices. And, people would line up down the street … Then they’d run over to a little pharmacy and there would be another line there.”

Eyre, with the assistance of West Virginia attorney Patrick McGinley, uncovered records showing the vast amount of pills shipped to the small-town pharmacies throughout the state and the extent of the pharmaceutical distribution to every county by each company — records that many multi-million dollar companies wanted to keep under wraps.

Eyre discovered extreme statistics, such as that of the town of War, West Virginia, which has a population of only 808. Top Rx, a pharmaceutical company, shipped more than 300,000 tablets of hydrocodone to a pharmacy there, which amounts to 350 pills per person.

“These businesses were like cash-only,” Eyre said. “You’d just go in and say, ‘Oh, doc … My back hurts.’ And then they’d say, ‘$200,’ and they’d give you a prescription. (The pain clinics) had special machines to spit out prescriptions by the thousands.”

While Eyre spent three years covering the pill industry, he said he did not fully understand the size of the companies that were shipping thousands of opioids to West Virginia on a daily basis until late in the investigative process. Cardinal Health Inc., McKesson Corporation and AmerisourceBergen Corporation are known as “The Big Three,” and they are able to control at least 90 percent of the drug wholesale market revenue. AmerisourceBergen, for example, was responsible for shipping 60.9 million hydrocodone pills and 26.6 million oxycodone tablets to West Virginia over a five-year span, according to Eyre’s findings.

“If you would have asked me four years ago what is Mckesson, AmerisourceBergen or Cardinal Health, I would have had no idea,” Eyre said. “But, I think it shows the appetite. These companies are not just shipping opioids. They are sending adderall. They are sending everything. The appetite for prescription drugs in America is just immense.”

According to Eyre, wholesale distributors had a responsibility to report to the DEA and to the Board of Pharmacy when a pharmacy was ordering a large number of drugs over consecutive days. There is a regulation in West Virginia Code of State Rules that directs the companies to identify suspicious orders and to report them. According to Eyre’s findings, the board received two reports between 2001 and June 2012 in West Virginia.

“That was called a suspicious order report, and they weren’t doing that for years,” Eyre said. “And when they finally did do that, the Board of Pharmacy wasn’t doing anything with the reports. They were not following the laws (and) not doing their due diligence.” (Read more.)