September 3, 2020 by The Associated Press 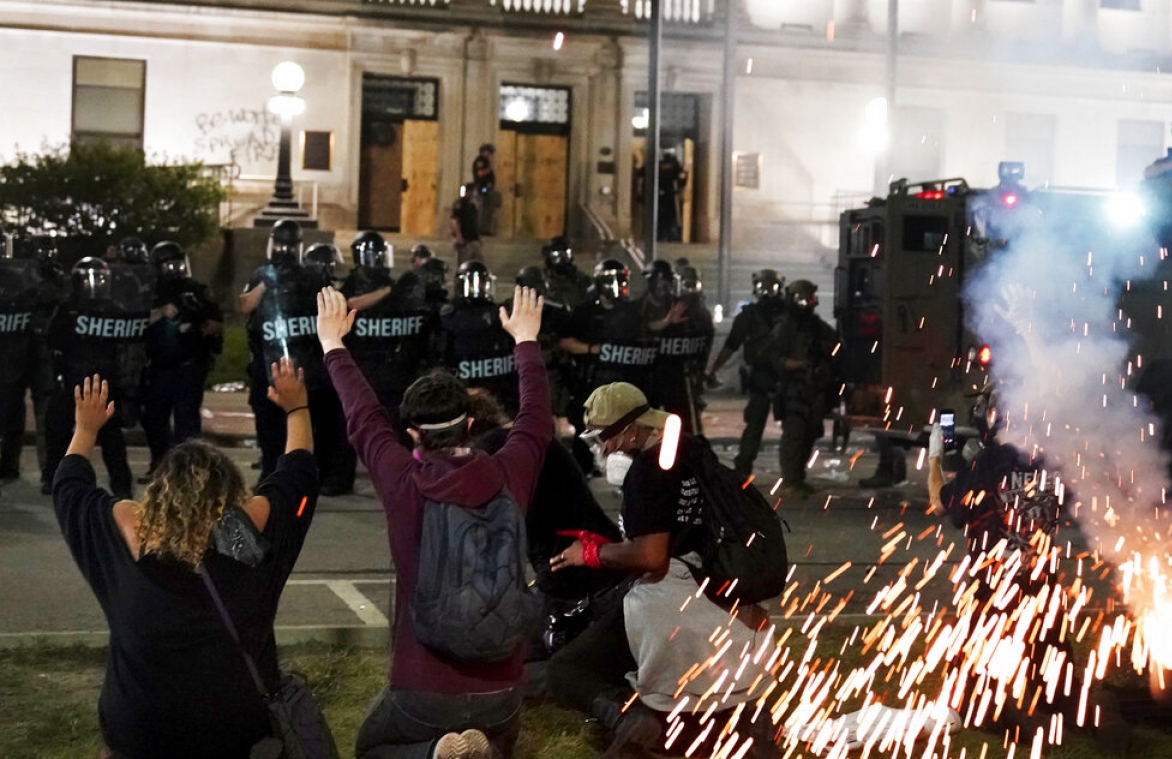 Police attempt to push back protesters outside the Kenosha County Courthouse, late Monday, Aug. 24, 2020, in Kenosha, Wis. Protesters converged on the county courthouse during a second night of clashes after the police shooting of Jacob Blake a day earlier turned Kenosha into the nation's latest flashpoint city in a summer of racial unrest. (AP Photo/David Goldman)

KENOSHA, Wis. (AP) — A black journalist quit his job at a Kenosha daily newspaper after disputing a headline for a story about a rally organized by the family of Jacob Blake, a black man who was shot by a police officer.

Daniel Thompson resigned from his position as a digital editor at The Kenosha News after seeing the headline that was posted online for the Saturday, Aug. 29, story. The headline read, "Kenosha speaker: 'If you kill one of us, it's time for us to kill one of yours."

Thompson, who attended the rally, said the headline did not reflect the messages of Blake's family and other speakers at an event that featured remarks, songs and a peaceful march. Thompson, who said he was the only black full-time journalist on staff, called the headline dangerous as tensions remained high in the city.

In an email to The Associated Press, the newspaper's top editor, Bob Heisse, said the story was a "late sidebar" to the newspaper's main protest story, and was published only online.

Heisse declined to comment on Thompson's departure or the decision behind the headline, though he noted the quote was accurate and caught on video. He also would not confirm whether Thompson was the only full-time black journalist at the paper, saying he couldn't comment on staffing.

"However, you should know that our staff has been working tirelessly to cover the protests and civil unrest in Kenosha since ... Jacob Blake was shot by a Kenosha police officer," Heisse said in the statement. "The community depends on us and we are working under challenging circumstances. We are telling all sides of the story with photos, videos and stories and we will continue to do so."

A white police officer shot Blake seven times in the back on Aug. 23, sparking protests and unrest that included some businesses being burned and vandalized. Authorities say an armed civilian killed two demonstrators on Aug. 25, and a 17-year-old from Illinois has been charged with those slayings.

Thompson's resignation comes amid a nationwide reckoning by news organizations regarding coverage of diverse communities and a lack of diversity in their newsrooms. Since the death of George Floyd in Minneapolis in May, editors at The New York Times and The Philadelphia Inquirer have stepped down over coverage decisions. Staff at the Pittsburgh Post-Gazette spoke out when a black reporter was told she couldn't cover protests after Floyd's death because of a tweet she'd sent.