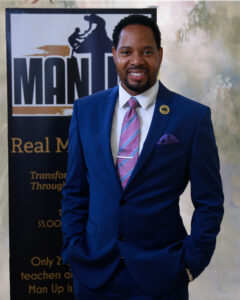 Dr. Washington is a fifth generation educator, inspired by his great-great grandfather Richard Adkins, who was born into slavery in 1860. Richard became literate and taught other slaves to read. This family history lives through Dr. Washington, his mother and several family members who pursued a career in public education. Dr. Washington is a cohort 4 member of New Leaders, Inc. and in 2008 became the first African-American Superintendent of Benton County Mississippi schools. Dr. Washington is the founding principal of Promise Academy Springhill located in Memphis, TN that opened in 2014. The urgency to launch Man Up Teacher Fellowship was realized as he began to recruit teachers for Promise Academy Spring Hill. “This is a movement, not a program that is aimed to change the world by placing highly effective men of color in classrooms throughout our nation.” Dr. Washington is a graduate of Mississippi State University, Union University and Ole Miss. He and his wife Vicki have two daughters Olivia and Emily.

Faculty and Staff Lunch and Learn

Want to change your name or add pronouns to D2L? Click Here