Karst is an area of land that is underlain by rock that dissolves slowly with slightly acid rainwater. There are many types and degrees of development of karst (Brahana and others, 1988, table 4; Herak and Stringfield, 1972); cedar glades, however, occur on pavement karst with thin (less than a few inches thick), or no, soil covering limestone rock in a moderate temperature climate.

Karst may be recognized by the presence of several, or all, of the following features:

When pointed out, the pock marked landscape of karst is perhaps the easiest feature to recognize; however, the less obvious hydrologic and biologic features integrate one part of the karst with another and are particularly sensitive to changes resulting from human activities. Sinkholes commonly connect vertically, through natural pipes in the soil, with narrow dissolution openings, larger caves, or even huge caverns in the bedrock below. The caves and caverns commonly have streams that collect water from the sinkholes and transmit the water long distances underground to large springs under, or in the banks of, nearby rivers. Thus, mature karst is drained by an underground plumbing system. 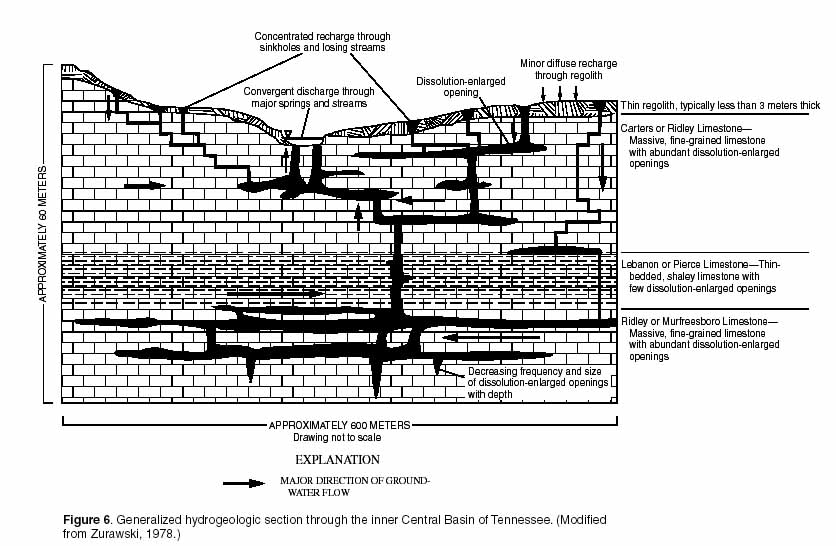 Illustration in Preliminary Conceptual Models of the Occurrence, Fate, and Transport of Chlorinated Solvents in Karst Regions of Tennessee

Within the twilight to total darkness of the caves and caverns, a specialized flora and fauna have evolved in response to the absence of light and to a severely diminished food supply. Some species are restricted to a single cave (Mohr and Poulson, 1966, p. 175).

The Mammoth Cave system and adjacent Pennyroyal Plateau in central Kentucky comprise an extensive karst near middle Tennessee that is formed on thick, soluble limestone (Quinlan and others, 1983). Sinkholes are so numerous in the plain that they might appear to result from aerial bombing. Streams flow north into rock bluffs, follow deep caves, flow under caves of the national park, and discharge into the Green River. On a smaller scale, the Snail Shell Cave system just west of Murfreesboro, Tennessee, exhibits similar topographic and drainage features (Thompson and others, 1989).

Karst forms primarily on and in limestone when rainwater picks up acids in the soil zone, and the acid attacks the calcium carbonate fragments of seashells that make-up the rock, releasing carbon dioxide, water, and calcium and bicarbonate ions. The ions are swept away by subsurface water leaving an opening in the rock. These openings form most readily along bedding planes, joints, and fractures in the rock. With time (thousands to millions of years), the openings widen to caves. When surface streams get into the caves, sand and gravel carried by the water abrades the walls of the cave and any collapsed rock on the cave floor to eventually form caverns. This process of cavern formation is sometimes reversed as streams and surface openings allow sediment to enter the cave and partly backfill the openings, resulting in a complex geometry of openings.

Problems of sinkhole flooding, sinkhole collapse, water pollution, and species extinction often follow human development in karst areas (Dilamarter and Csallany, 1977). Construction of roads and structures in sinkholes may plug the underground outlet from the sinkhole resulting in increased flood heights and flooding of upstream properties (fig. 3). Conversely, cleaning and widening of the outlet may allow large slugs of storm water to rapidly enter the underlying cave system, exceeding its water carrying capacity and resulting in collapse of the soil above the cave (fig. 4). Increased flooding also occurs down the cavern system where this extra water reverses the normal downward flow of water from sinkholes that are at a lower land-surface elevation than the sinkhole whose outlet was widened.

Parking lots and large paved areas collect abnormally large volumes of water during an intense storm. If this water is discharged to a single point at the edge of the pavement, the water may erode new vertical channels through the saturated soil. Water passing vertically through these pipes may overload the natural, underground drainage system and result in the collapse of the land surface. Collapse may occur not only at the point of discharge but also along the length of the receiving cave at points least expected such as under roads and valuable buildings.

Water draining from lawns, gardens, and parking areas often contains fertilizer, animal waste, and pesticides that are delivered untreated to a nearby river by the receiving cave. These pollutants add to the cost of water treatment by downstream water users. Fertilizer also stimulates the growth of unsightly algae that robs the stream water of oxygen possibly resulting in fish kills. Pollutants and sediment resulting from human activity upset the aquatic ecology of the cave-dwelling plants and animals, leading in some cases to their extinction.