The Gore Center’s graduate assistants in the Public History program use our archival collections to regularly develop exhibits for our research room. These exhibits provide valuable hands-on training for our students interested in exhibit development, curation, and collections management. The exhibits also allow us to educate the public through the interpretation of significant themes or events documented within the archive. Featured below are some photographs and descriptions of our current and past exhibits.

I AM TRUE BLACK: A History of Black Student Life & Activism

The Gore Center made Sylvester Brooks buttons and I Am True Black t-shirts as promotional items. We also created the I Am True Black: The Syllabus, which provides a list of primary and secondary sources about this important history. 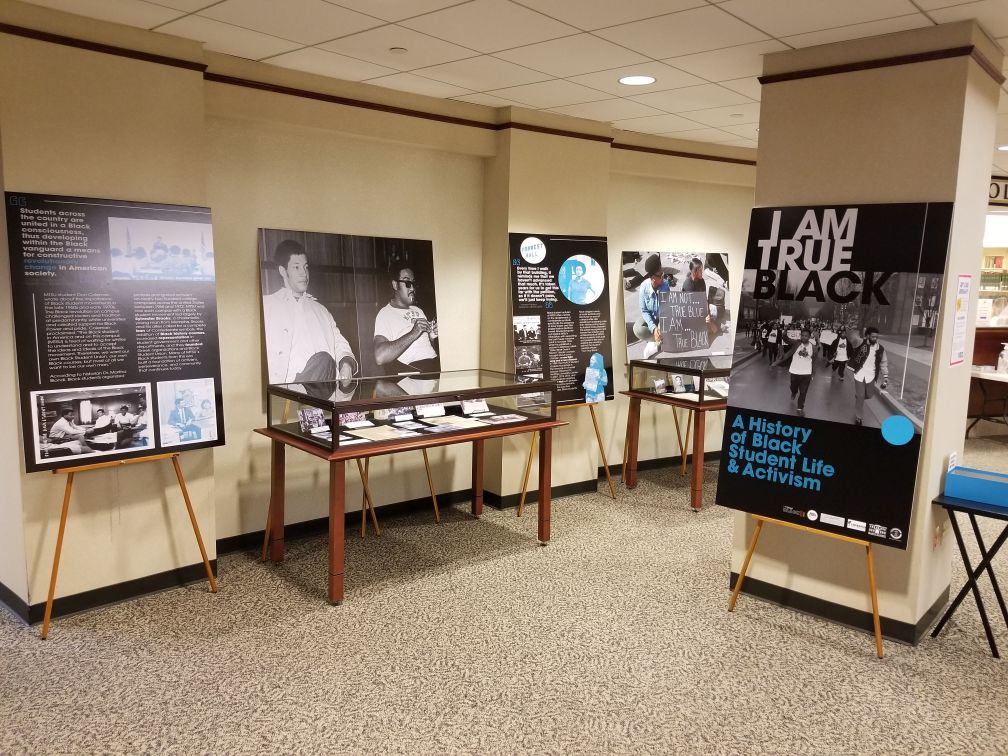 Opened in November 2014, this exhibit covers veterans’ history from World War II to the most recent wars in Afghanistan and Iraq. The exhibit uses our extensive oral history collections to highlight fascinating stories from veterans serving across the globe. There is also a corresponding display case with artifacts from our veterans’ collections. Currently, the display case features artifacts from those who served during the Vietnam War. 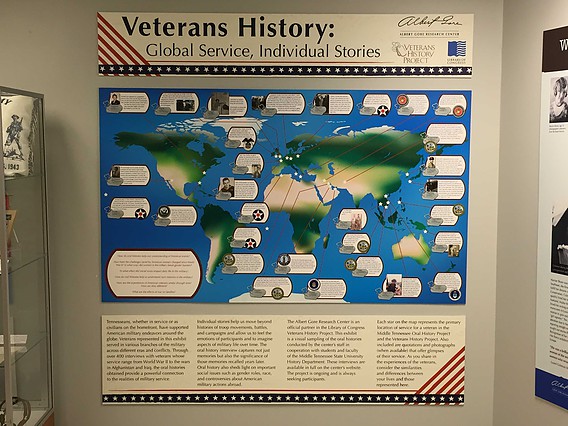 Battle for the Ballot: the Story of Women's Suffrage in the United States

Opened in March 2020 in MTSU's Walker Library, this exhibit explores highlights from the long women's suffrage movement dating back to the 19th century. It features three large text panels (you can read the text here) and mutliple four display cases: one on the overall national narrative of the U.S. suffrage movement, one case specifically on Tennessee's important role in this history, one on the League of Women Voters of Murfreesboro/Rutherford County, and one on Delta Sigma Theta's in the suffrage movement.

Opening in September 2019, this exhibit covered the major highlights of Albert Gore, Sr.'s 32 years in Congress. Visitors explored documents, photographs, and objects from the Gore Papers as well as other related archival collections. The three banner stands are currently still on display outside the Gore Center's entrance.

Opening in May 2019, this exhibit honored the 75th anniversary of D-Day and explords how Tennesseans were involved in World War II on the home front and overseas. Public History graduate student Marley Abbott worked alongside archivist Sarah Calise to curate this exhibit, which was located on the first floor of James E. Walker Library.

Opening in October 2018, this exhibit covered certain aspects in the history of MT Lambda. Founded in 1988, MT Lambda became the first officially recognized LGBT+ student organization in the state of Tennessee. Originally, this exhibit existed in three parts throughout campus, but as of today the displays in our research room are the only exhibits up.

In October 2017, the Gore Center installed over 30 objects at the Rutherford County Chamber of Commerce. The exhibit displayed four themes that highlight the collections at the Gore Center: university history, political history, women's history, and veterans history.

From the President to the People

Opening in January 2017, this exhibit explored the logistics of Inauguration Day, and how every citizen has an opportunity to be involved at the local, state, or national level. For the development of the exhibit case and interpretative text, the students curated artifacts and documents from our political collections, mainly the Bart Gordon Papers.

Warriors with Words and Faith: Marion Skeen Coleman Peck and Donald A. Price

Opening in December 2014, this exhibit was about the lives of two captivating people—Marion Peck and Donald Price. Peck was a journalist who covered the Tennessee Maneuvers, World War II, the Berlin Airlift, and the Civil Rights Movement. Learn more about Peck on our blog. Price was a West Point graduate and served in the Army in Korea, Vietnam, and Germany. Learn more about Price in our blog post on commemorating the Vietnam War.

This exhibit opened in March 2013, and it tells the story of Louise Mott Miles—a Rutherford County native, Middle Tennessee State Teachers College graduate, and a dedicated educator. The display case featured her scrapbooks, diaries, and other items that reflected her work as an educator and craftswoman. For photographs and more, see our blog archive.