Each year the Department of History welcomes students to a Maymester Experience, an intensive teaching session catalogued as the "Current Issues in Public History" seminar. Maymester Experiences typically feature a Distinguished Visiting Public Historian who tailors the seminar to his or her practice field, or an objective-driven project, for which students work with a variety of local and national experts. Please scroll down to read about past Maymester seminars. 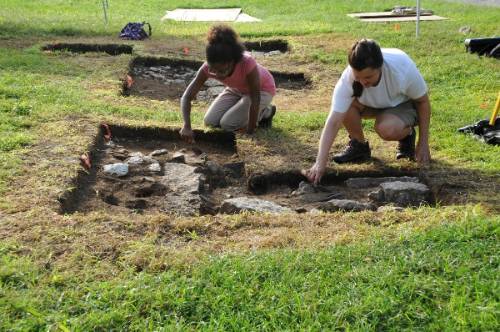 During the summer of 2015, MTSU’s Public History Program conducted its first archaeological field school for graduate students in Public History and advanced undergraduates majoring in history or anthropology, funded by a Federal Preservation Grant from the Tennessee Historical Commission. Students participated in archaeological research excavations of Clover Bottom Plantation (Site 40DV186), under the direction of Principal Investigator Dr. Kathryn Sikes. Located on state land managed by the Tennessee Historical Commission in Davidson County, TN, Clover Bottom is listed on the National Register for its historic antebellum mansion (constructed beginning in 1852). This mansion and its large estate were owned by the slaveholding Hoggatt and Price families throughout most of the antebellum period and during Reconstruction, and much is recorded in primary source documents about these two families. However, the majority of the site’s residents were African Americans whose names and experiences were not as frequently discussed on paper. One of the notable exceptions to this pattern is the memoir left by John McCline, Slavery in the Clover Bottoms (edited by Jan Furman), which includes his recollections of his childhood enslavement on this plantation. MTSU excavations sought to contribute new archaeological evidence along with expanded archival research to further our understanding of John McCline’s community from the 1790s-1918, following his family and others through their transition to freedom.

Student field school excavations aimed to identify and investigate outbuildings, workspaces, communal gathering spaces, and dwellings used by African American families at Clover Bottom. They began with a preliminary archaeological shovel test survey to locate building remnants and concentrations of artifacts, followed by the excavation of 19 test units in areas that demonstrated archaeological potential. The crew carefully sifted the dirt they dug through screens to collect and label the artifacts they found, recording the locations of their findings in their field records. By these techniques, the crew succeeded in uncovering the outline of the northern half of one building that was almost certainly constructed sometime during the 1800s, but not abandoned until the mid-20th century. Continuing study of the excavation’s field records and artifacts will help to define more precise dates for this building’s construction and destruction. It may be one of several former “quarters” that housed enslaved families on the property, and probably continued to shelter tenant families employed by the Price family following emancipation. Alternatively the building may have had a specialized function other than housing (as in the case of a dairy, smokehouse, or icehouse) that reflects the labor performed by enslaved residents. 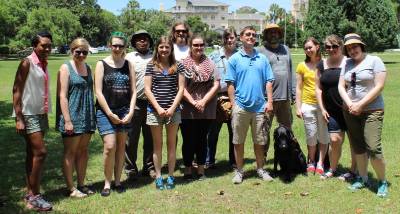 Owned by the state of Georgia since 1947, 65 percent of Jekyll Island’s land remains in a natural state. Layers of its rich history include Native American, colonial Spanish, and colonial English cultures. During the French Revolution, the Du Bignons, a French Huguenot family, moved to the island, where they introduced slavery and established plantations. Descendants of the Du Bignons sold the land to wealthy investors in the late 1880s, who then established and sold shares in the Jekyll Island Club, an exclusive hunting club and retreat.

Previously, the main interpretive focus had been on the millionaires. MTSU students worked to incorporate the voices of women, children, servants, and other groups who worked tirelessly in the two- and three-story “cottages” to create the extravagant lifestyle that these millionaires referred to as the “simple life.”

Students worked under the direction of Dr. Brenden Martin and with Jekyll Island Museum curator Gretchen Greminger and Dr. June Hall McCash, MTSU Professor Emerita of French. Martin notes that staff members of the Jekyll Island Authority and Museum were impressed with the field school’s accomplishments and have invited MTSU to come back. Students’ exhibits and contributions will remain part of Jekyll Island’s interpretation for years to come

Dr. David Thelen Distinguished Professor Emeritus at Indiana University, was in residence Maymester 2013 to teach Current Issues in Public History Practice. Thelen took eleven doctoral and master's students on an exploration of engagement between "the public" (users, visitors, students, readers, amateurs, hobbyists, partners) and "history" (in all its products, presentations, and practices). Guest speakers included David Northrup of the Institute for Social Research at York University, Toronto, one of the principals of "Canadiens and Their Pasts," a study inspired byPresence of the Past (Rosenzweig and Thelen, 1998), and two of the top museum professionals in the United States: Ellen Rosenthal, president and CEO of Conner Prairie Interactive History Park, and Barbara Franco, founding director of Gettysburg Seminary Ridge Museum (and previously affiliated with the Pennsylvania Historical and Museum Commission, the Historical Society of Washington, D.C., and the Minnesota Historical Society). The class also conducted fieldwork at The Hermitage, Home of President Andrew Jackson, and the Country Music Hall of Fame. On May 29, Barbara and Ellen were the principal speakers at a public forum, "From Education to Engagement: Transforming Visitor Experiences."

Download complete transcripts of their talks and the hour-long Q&A period that followed.

Efforts to understand the impact of urban renewal on Murfreesboro's African American community led to the topic of the 2012, during which students gathered evidence relating to the largely undocumented black residential and business districts known collectively as "The Bottoms." Changing community priorities precipitated the decision to raze The Bottoms to widen what is now portions of Broad Street and Civic Plaza in the 1960s. Working with Bradley Academy Historical Association, students conducted oral histories, digitized photographs, and collected documents that shed light on the local African American community on the eve of integration. Students and organizers also hosted "An Evening With Nikki Giovanni," a special program in which the world renowned poet and educator spoke about her career as a civil rights activist.

Dr. Spencer Crew, widely recognized as one of the top public historians in the nation, is the former executive director of the Smithsonian Institution's National Museum of American History (NMAH) and the National Underground Railroad Freedom Center. He is currently on the faculty of George Mason University .

Dr. Crew's seminar, "Issues of Conscience, Commemoration, and Memory in Museums and Historic Places,"; focused on ways that public historians are incorporating issues of freedom and justice into their work. Dr. Crew also moderated a panel discussion, "American Slavery and Its Impact on Universities, Past and Present,"; that included Dr. Jim Campbell of Stanford University, Dr. Alfred Brophy of the University of North Carolina, and MTSU's own Dr. Carroll Van West.

Dr. Michael Tomlan wears many hats, including director of the Historic Preservation Planning Program at Cornell University, project director for the National Council of Preservation Education , advisor to the Global Heritage Fund , and president of Historic Urban Plans Inc. He has also consulted on projects for the World Heritage Fund , the J. Paul Getty Trust, and numerous other national and international projects.

Dr. Tomlan taught a graduate seminar on sacred places and preservation. He also presented "Why Historians and Preservationists Avoid Religion," a community lecture, at St. Paul's Episcopal Church in Murfreesboro.

Dr. Trudy Huskamp Peterson is a consulting archivist and author of Final Acts: A Guide to Preserving the Records of Truth Commissions (Woodrow Wilson Center Press/Johns Hopkins University Press, 2005) . Her 30-year career as an archivist has included a stint as Acting Archivist of the United States, serving on South Africa's Truth and Reconciliation Commission , and appointment as a public policy scholar with the Woodrow Wilson International Center for Scholars.

In addition to teaching a summer graduate course on the power of records, Dr. Peterson was the featured speaker at a public forum during which she addressed topics related to her international work to connect the preservation of records to human rights.

Dr. Dwight Pitcaithley, former Chief Historian of the National Park Service, and currently on the faculty of New Mexico State University, taught a course in summer 2006 on the topic of "Reinterpreting the Civil War."; The course examined the strategies that three National Historic Battlefields and two museums have adopted in recent years to interpret a broader history of the Civil War. As Chief Historian, he launched a sweeping Civil War reinterpretation initiative, articulated in Rally on the High Ground: The National Park Service Symposium on the Civil War (Eastern National, 2001).

Dr. Pitcaithley also co-moderated a community forum, "Rethinking the Civil War after 150 Years,"; with Dr. John Coski, Director of the Museum of the Confederacy, on opportunities and challenges with commemorating the sesquicentennial of the Civil War (2011-2015).

The executive offices of the OHA have opened at MTSU and will be here for the next five years. The office will be co-directed by Albert Gore Research Center Director Louis Kyriakoudes and History Professor Kristine McCusker.