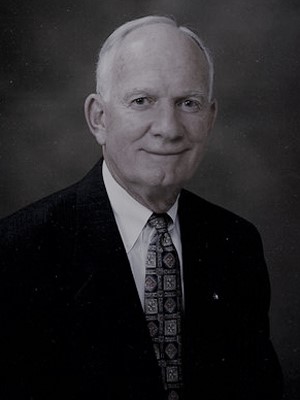 Jim K. Lancaster was born to parents, Edward and Dimple Knight Lancaster, in the Lancaster Community of Smith County.  Jim arrived twenty minutes before twin brother Joe and was raised in the log cabin on the family farm.  He attended the Lancaster Elementary School and graduated from Gordonsville High School. Both boys attended Tennessee Tech on football scholarships. While at Tech he served as President of the “T” Club and was elected to “Who’s Who among College Students.  Athletically, he received “All Conference honors as a single wing tailback.  Mr. Lancaster graduated from Tennessee Tech University in 1951 “With Highest Honors” and a B.S. in Agronomy (Soil Science) Agriculture.  He then married Miss Green and accepted a position with University of Tennessee Extension as assistant county agricultural extension agent in Morgan County.  Then in January, 1952 he moved to Wilson County to head up the Wilson County office of the Tennessee Farm Bureau where he remained as manager for more than 43 years.  During this time he led the company in life insurance production every year.  In 1972 he earned Certified Life Underwriter – American College in Byrn Pennsylvania.  In 1973 he received the Advanced Estate Planning degree and additionally in 1982 became a chartered Financial Consultant.  Though he retired as the Agency Manager in 1995, he continued to be one of the company’s top life agents for several more years.