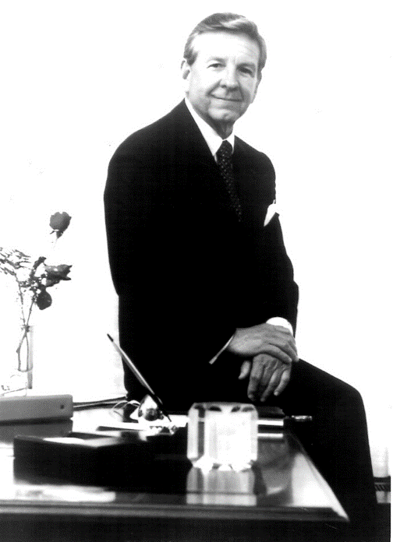 Richard M. Miller is a retired insurance brokerage firm executive who lives in Nashville.  He is a phenomenal success story.  He took a one-person insurance agency and parlayed it through shrewd mergers and acquisitions and outstanding management skills into one of the largest brokerage firms in the country.

Mr. Miller joined Dominican Insurance Agency in Nashville in 1955 and three years later founded his own agency, Richard M. Miller and Co. He formed and became president of Synercon Corporation in Nashville in 1970, which became the holding company for his agency and other agencies and companies.  Through a number of mergers and acquisitions and the phenomenal growth of its brokerage operations, Synercon had expanded internationally to Milan, Italy, Singapore, and Bermuda by 1973.

The Corroon & Black headquarters were moved to Nashville in 1990, where it employed about 1,000 agents, brokers, and support staff.  Also in 1990, it merged with Willis Faber PLC to become Willis Corroon, with Mr. Miller as its Chief executive.  The new company was the world’s fourth largest insurance brokerage firm with $10 billion in premiums and $1 billion in commission fees, offices in 70 countries, more than 100 U.S. offices, and 11,000 employees.  Mr. Miller became chief executive emeritus of the company upon his retirement in 1995.