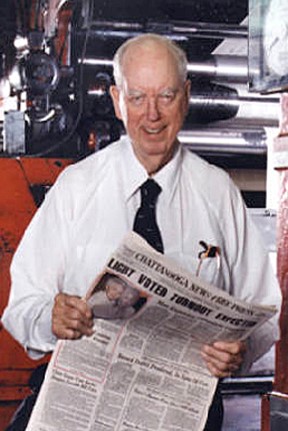 Roy McDonald started out as a grocer looking for what the Tennessee Encyclopedia of History and Culture described as "an inexpensive alternative to the dominant Chattanooga Times" to advertise his chain of Home Stores. That led him in 1933 to found the Free Press, first as a small flyer, which proved popular and growing enterprise in southeast Tennessee for decades to come. McDonald added news features and comics to the Sunday weekly three years later and in April began charging five cents.

In August, the Free Press began daily publication and was in direct competition with the morning Times and the afternoon Chattanooga News. McDonald purchased the News in 1939 and launched a new afternoon daily, the Chattanooga News-Free Press, targeting blue-collar workers whose shifts ended at 4 o'clock. In what could be described as urban community journalism, McDonald filled his publication with folksy hometown news and upbeat business features, steadily building circulation against the better known and respected Times.

hey entered a joint operating agreements -- described as a "truce" -- in 1942 wherein the two papers shared advertising, circulation and production departments, but maintained separate news and editorial staffs. McDonald's increasing use of photographs of events spurred readership. McDonald died in 1990, but his son, Frank McDonald became chairman and president of the newspaper. In 1993 the newspaper became Chattanooga Free Press again. In 1998, it was sold to an Arkansas publisher who later acquired the Chattanooga Times and merged the newspapers ultimately under the flag of the Chattanooga Times Free Press. It continued to publish separate editorial pages.