Dugger (B.S. '00) and TNDV, which stands for Tennessee Digital Video, were featured in Broadcast Engineering magazine's July 2011 print and digital editions in a story headlined "A small production company with big ideas.";

The story chronicles Dugger's almost nonstop success with a single 30-foot vehicle, despite a sluggish economy, and his efforts to expand his fleet with a second new mobile unit and a third with an MTSU twist.

His newest truck, called Aspiration, just hit the road. The 40-foot vehicle will be the first mobile production truck in the Southeast that can support live multicamera 3-D productions.

The Mass Comm Wall of Fame's youngest member already has his third truck—it's the 40-foot truck he trained on at MTSU and later used to teach other students. The University retired the truck this summer and replaced it with a new $1.4 million mobile-production lab for the Department of Electronic Media Communication.

"MTSU was the catalyst for my career,"; Dugger says. "The opportunities in the department with projects both on campus and off and the unparalleled attention I received from a very supportive faculty and staff was just a few of the standout memories I have of my time at MTSU.

"The doors that were opened by Dr. Mary Nichols for me and the day-to-day mentoring I received from staff member Marc Parrish were major influences on my career today.";

Read the complete Broadcast Engineering story at http://bit.ly/MTDuggerArticle. To learn more about Dugger's company, TNDV, click on the company logo above. 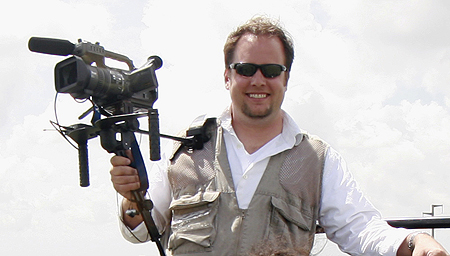 LA DOLCE VITA—Mass-comm alumnus Nic Dugger strikes a pose while on location in Tuscany for his mobile production company, TNDV.