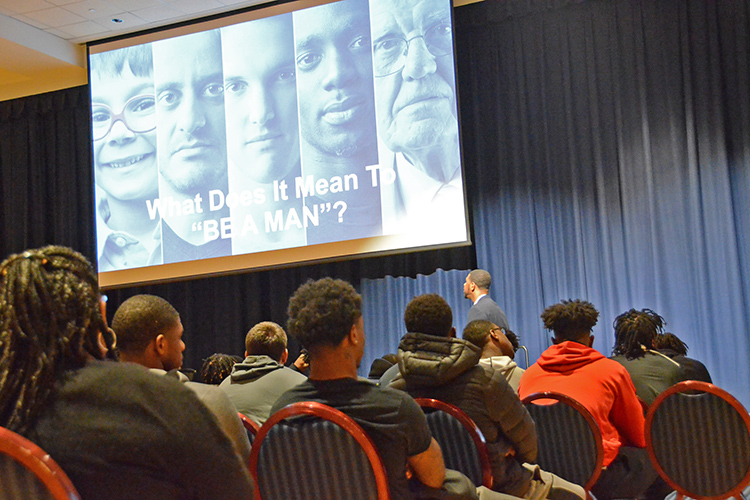 Middle Tennessee State University continues its commitment to creating a stronger sense of unity and awareness surrounding the topics of healthy relationships, sexual assault, masculinity and consent in an ongoing effort to promote campus safety and security.

Various events including interactive workshops and training sessions were offered across campus recently to shed light on these topics as part of this year’s “Sexual Responsibility and Consent Week” held Feb. 10-14.

Former Vanderbilt University and professional basketball player Shan Foster discussed “Creating a Culture of Non-Violence and Healthy Masculinity” in separate public talks for women and men Feb. 11 in the Tennessee Room of the James Union Building.

Foster speaks throughout the country to educate on gender-based violence prevention and masculinity. During his time working with the Amend Together Program of Nashville and Middle Tennessee, Foster has tried to encourage men to become more engaged on the topic of gender issues, such as women's rights.

Foster believes MTSU is quickly headed in the right direction of accomplishing that goal, and his campus sessions featured strong representations of student-athletes in attendance.

“I think there’s a great deal of work being done,” said Foster. “There are positions that are here, that were not years ago. So, it’s very encouraging to see the emphasis placed not only on awareness, but in building relationships so that change can take place.”

Foster’s appearance was co-sponsored by MTSU Athletics, Institutional Equity and Compliance and the Power of ONE, an on-campus campaign dedicated to empowering students, challenged each student to strive to make campus a safer place.

The training informs students how to intervene as a bystander using the 5-Ds (Delegate, Direct, Distract, Delay, and Document), and is provided through the June Anderson Center at the MTSU Center for Student Involvement and Leadership.

“It starts with the willingness to engage in these conversations,” said Hill. “Gender-based violence has gained more visibility. These issues impact all of us in a certain way whether you are a victim or have witnessed someone else experience it.”

Hill said she felt the need to provide students and faculty with a speaker who would not only raise awareness, but spark action. The person who she felt fit this description best was Foster.

“He is such an extraordinary role model,” said Hill. “We felt his story would resonate with the student athletes and general student body. Because of this he was a great candidate for the speaking event.”

Foster mentioned that the progress will only continue if the right people step up and share their voice. He believes any student is possible to make an influence, however he knows athletes have a platform unlike most.

“As a student-athlete, you have the ability to shape and change the culture,” Foster said. “I want student-athletes to understand the power of influence.”

The university has been able to develop various groups to combat gender-based violence on campus, including strong partnerships with the Office of Fraternity and Sorority Life, Office of Intercultural and Diversity Affairs and other student organizations. Due to the OVW grant, greater collaboration has happened amongst these groups, she added.

Travis Strattion, assistant manager for the MTSU Scholars Academy and Engaging Men Committee co-chair, has been meeting with male students to create conversation about these topics. He mentioned how Foster’s discussion on masculinity will lead to more open thoughts.

“Shane provided some good tools in our effort to organize men on campus,” said Strattion. “This information will help us break generational norms of what true masculinity is.”