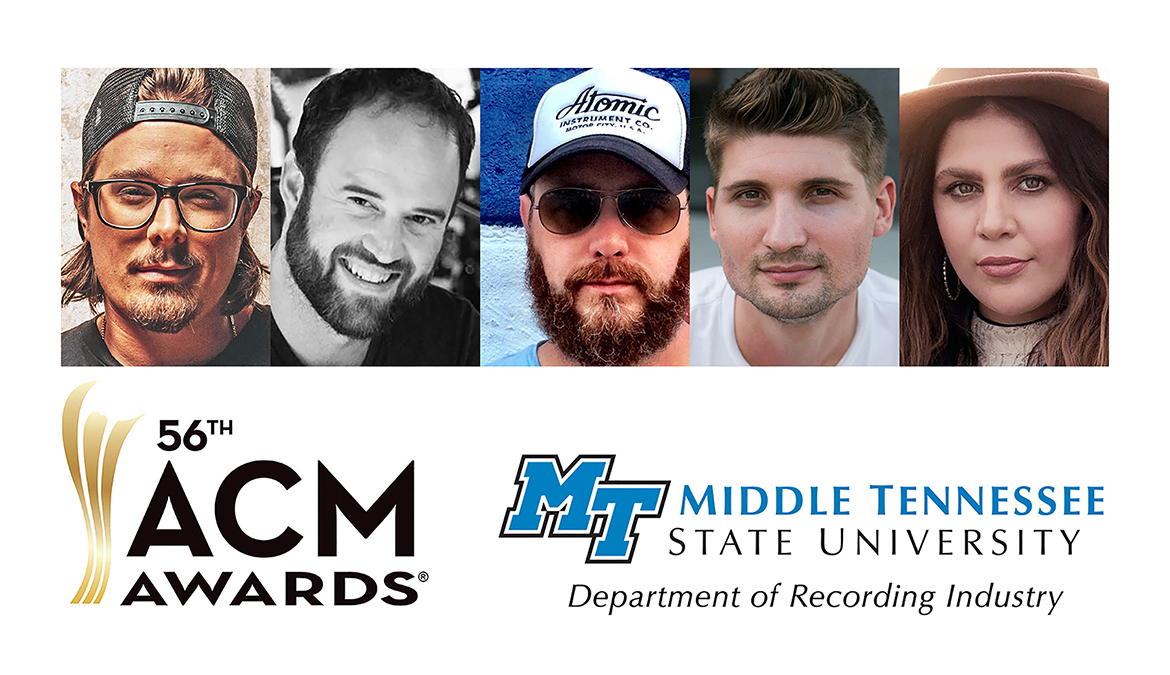 Three Middle Tennessee State University graduates nominated at the top of their fields in the 56th Academy of Country Music Awards show the range of the Department of Recording Industry's programs and how they prepare students for success.

And the best part is that the trio aren't the only MTSU nominees in the 56th ACM Awards, which aired April 18 on CBS and will continue later this year at the ACM Honors.

Michael Hardy, who uses only his last name professionally, earned his commercial songwriting degree from MTSU in 2013 and is nominated as the ACM’s songwriter of the year for the second year.

In the eight months since he released his full-length debut CD as an artist, he was also nominated as the ACM’s new male artist of the year and for the music event of the year for his No. 1 single, "One Beer," which features Lauren Alaina and Devin Dawson.

Jason A. Hall, a 2000 recording industry alumnus, has engineered multiple Grammy- and ACM Award-nominated projects and has won two Grammys, including one announced last month.

This year’s ACMs nominated him as the group's audio engineer of the year. He was also competing against himself in the album of the year category and has earned a nod for single of the year, too.

The ACM's 2019 audio engineer of the year, F. Reid Shippen, a 1994 recording industry alumnus with a cabinet full of Grammys, ACMs and other honors, is nominated for the top engineer’s award again this year.

She's the first Black woman to host the event and was the first to perform at the ACMs when she sang during last fall’s pandemic-rescheduled event.

Hall was nominated for engineering Miranda Lambert's single of the year entry, "Bluebird." He won the best country album Grammy last month for "Wildcard," the CD that included that song, and was an ACM album nominee for creating “Wildcard” last year.

Superstar Hillary Scott, a former MTSU student and new scholarship creator, was on this year's ACMs list twice: for group of the year with her longtime partners in Lady A and in the event of the year category — competing against Hardy, too — as part of an ensemble featured on Thomas Rhett's "Be a Light."

In pre-show announcements, the ACMs revealed that Jimmie Allen won the new male artist award and Carly Pearce and Lee Brice received the music event award. During the ceremony, Pearce and Brice also took home the single of the year honors, and Chris Stapleton won the top album award.

The ACM Honors, which are held after the televised ceremony, recognize the academy's special awards, off-camera winners and the industry, songwriter and studio recording awards, including the producer and engineer honors.

The academy said in a release after the ACMs ceremony that "more information [is] to be announced in the coming weeks" on a date and venue for the ACM Honors event.

Hardy has written seven No. 1 songs for other artists in his eight-year professional career, including last year's ACM single of the year winner and song of the year nominee, "God's Country," for Blake Shelton.

He’s competing against two of his co-writers, Ashley Gorley and Hillary Lindsey, in this year’s ACM top songwriter category.

Hardy’s debut CD, "A Rock," was released in September 2020, two years after his first EP, "This Ole Boy." His songs have so far accumulated more than 668 million career on-demand streams.

The video for “One Beer” is available below.

During their big 2020 Grammy year, Hall and Mansfield were part of the crew nominated for three of the five country albums, pitting Brandy Clark’s “Your Life is a Record” against McBryde's CD and Lambert's winning project.

The same team brought home last year's ACM musical event award for producing Lambert's "Fooled Around and Fell in Love" cover, in which she collaborated with McBryde and a team of country chanteuses on the Elvin Bishop classic.

Hall and Mansfield also have been nominated for multiple awards for their work with artists including Eric Church and Little Big Town. Hall also has a 2005 best rock gospel album Grammy for his work with Audio Adrenaline.

The video for “Bluebird” is available below.

MTSU’s Shippen, who brought home his fifth career Grammy in January 2020 for co-producing, engineering and mixing Gloria Gaynor’s best roots gospel album, “Testimony,” has been a part of six more Grammy-winning projects and multiple Country Music Association and ACM winners during his career.

A member of the College of Media and Entertainment's Wall of Fame since 2017, his credits range from Kelsea Ballerini and India.Arie to the Backstreet Boys and Robert Randolph and the Family Band.

The lyric video for “Black Like Me” is available below.

Lady A — comprising Scott, Dave Haywood and Charles Kelley — began their successful awards-show adventures in 2009, using multiplatinum-selling “I Run to You" and "Need You Now” to launch a winning streak that also earned 1980 recording industry alumnus L. Clarke Schleicher three engineering Grammys, a fistful of ACM awards and two nominations as the ACM’s engineer of the year.

The trio, called Lady Antebellum since its 2006 founding, changed its name in June 2020 to remove slavery-related connotations in the wake of Black Lives Matter protests. The group was nominated for the ACM single of the year last year for "What If I Never Get Over You."

The video for Lady A’s “Ocean” is available below.

The ACMs also include awards for entertainer of the year and video of the year, industry awards for special events and venues, studio recording awards for individual musicians, radio personality and station awards, and special awards presented by the board of directors that recognize outstanding achievement and contributions to country music.

MTSU’s Department of Recording Industry made Billboard’s annual list of America’s top music business schools for the seventh time in 2020, standing with its counterparts across the country as top producers of ready-to-work music industry pros.

MTSU media students joined the ACMs in person in 2018 and 2019 to work behind the scenes and network at the event in Las Vegas.

The pandemic forced the academy to reschedule the 2020 event from April to September and move it to Nashville for a socially distanced show.

The MTSU contingent, with most of the university’s fall 2020 courses moved online and extracurricular events canceled, had to sit out that opportunity as well as this spring’s ACMs.

MTSU established its Department of Recording Industry in 1973 and presented its first Bachelor of Science degree in 1974.

Slightly more than 1,100 students currently are recording industry majors at MTSU. About two-thirds are audio production majors, and a third are music business or commercial songwriting majors.

For more information about the Department of Recording Industry in MTSU’s College of Media and Entertainment, visit https://mtsu.edu/recording-industry.

The college, which also includes the School of Journalism and Strategic Media and the Department of Media Arts, has a website at https://mtsu.edu/media.

For more on the Academy of Country Music and its annual awards, including a list of all this year’s nominees and winners, visit www.acmcountry.com.