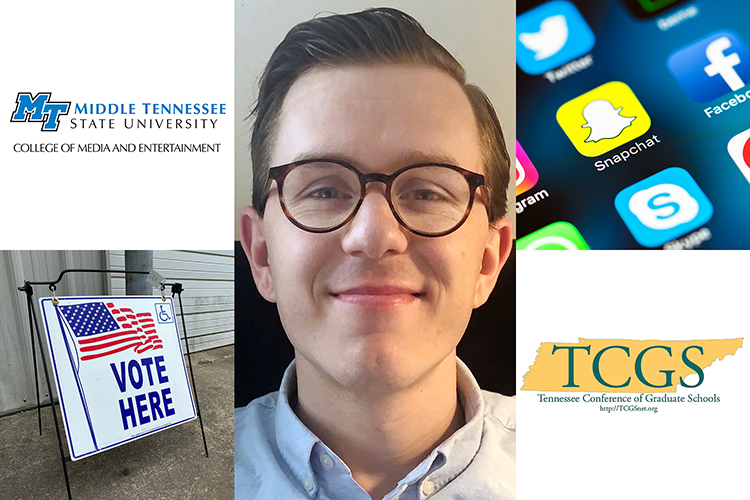 An MTSU media graduate’s timely research into how social media can affect politics and voting has been chosen as the year’s best thesis by the Tennessee Conference of Graduate Schools.

Ben Burnley earned his Master of Science from the Media and Communication Master’s Program in MTSU’s School of Journalism and Strategic Media almost a year ago.

He quickly headed to Georgetown University’s McCourt School of Public Policy in Washington, D.C., where he’s in his second semester of working toward a second master’s degree, this time in public policy, and a doctorate in American government — at the same time.

His master’s degree work from MTSU’s College of Media and Entertainment began with an interest in how closely social media users, particularly on platforms like Facebook and Twitter, follow different types of news. It led to his award-winning thesis, an especially timely look into how social media has — and may again — affect U.S. voting decisions.

“Social, Mediated Democracy: Modeling the Effects of Social Media Use and Deliberative Behaviors on Voting,” the current winner of the Tennessee Conference of Graduate Schools’ Outstanding Thesis Award, is available to read free here at MTSU's JEWLScholar@MTSU digital research archives.

“It was an honor to win the award, (but) I certainly didn't sit down thinking about winning awards when I started writing it,” Burnley said. “Basically, when I sat down, I wanted to look at how social media affected our understanding of politics and how we participated.

“The paper sort of plugs into theories of democracy and how we learn about politics and engage in politics, specifically through deliberative behaviors like discussing the news with others and sharing our opinions.

“We took social media use, explicitly political social media use, and considered how that might change the frequency of voting for individuals,” he continued. “What we wanted to see was if you use social media — Twitter, Facebook, things like that — and you use them for politics, did you end up voting any more (often)?”

The Orlando, Florida, native’s lifelong love of playing music led him to a Bachelor of Arts degree from Florida State. Then, after a stint touring with a band out of Nashville and working in music publishing, the 2016 election convinced him to shift his interests from music to political science — and to a master’s degree at MTSU.

He's admitted that he was “terribly afraid of the math side of things” when he started his MTSU degree. He continues to credit media college professors Ken Blake and Jason Reineke, along with political science professor Andrei Korobkov, with nudging him toward his new focus.

“I'm glad to be doing this research in 2020 and not in maybe 1970, because there's a lot of great data sets available online,” Burnley joked. “The data we used (for this thesis) is from the Pew Research Center here in Washington.”

The Tennessee Conference of Graduate Schools, founded in 1977, comprises more than 40 higher education institutions across the state and chooses its top thesis each year from among research submitted by grad school deans across the state.

It's part of the organization’s work to promote graduate education and research, which current TCGS president Ernest Brothers, the associate dean of the Graduate School at the University of Tennessee, Knoxville, says are “the engine that drives innovation, prosperity and economic mobility.”

The winner is chosen “based on the clarity of style and presentation, scholarship, research method, and contributions to the field or discipline,” according to the conference rules. The award recipient also receives $500.

While he’s at Georgetown and taking a moment to bask in his win, Burnley and his fellow scholars will have unique access to policy research, experts and opportunities, including learning from McCourt fellowship holders who’ve served in Congress, led presidential campaigns, worked in internationally renowned media and advised presidents.

He encouraged others to follow their interests and continue their education if that’s where those interests lie.

“For me, it's always been to stay curious and continue to ask questions. Early on for me, that looked different, it didn't look like political science. But at some point in my life, it changed; it was questions of political communication. And that's what led me to Middle Tennessee State,” Burnley said.

“Find people that are willing to help you answer those questions. That was very much what Jason (Reineke) was for me, and the rest of the faculty at MTSU. I think with those two things you really can get far.”