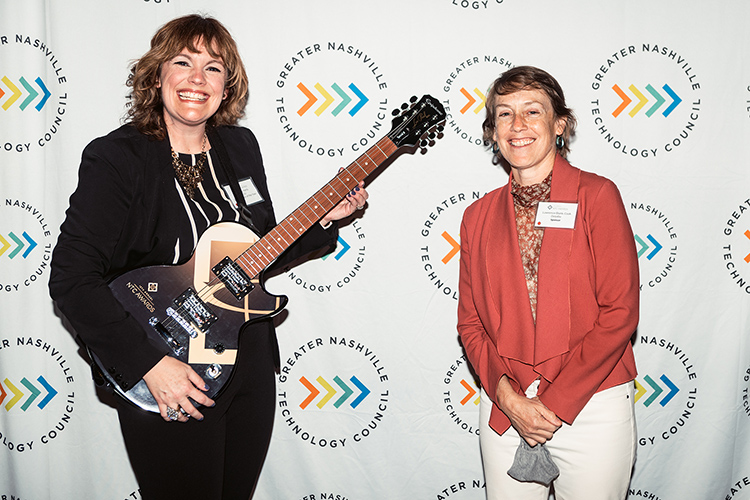 Middle Tennessee State University professor Amy Harris was honored this year by the Greater Nashville Technology Council with its Diversity and Inclusion Advocate of the Year Award.

Harris, an associate professor of business intelligence and analytics within the Jennings A. Jones College of Business, was the recipient of one of two new awards presented this year, the other being Technology Educator of the Year.

The Midstate advocacy organization announced the winners of the 12th Annual NTC Awards last month during a live broadcast from Stage Post Studios in Nashville, Tennessee, to hundreds of online attendees. This was the first time the event was a hybrid in-person and virtually webcast program.

The Diversity and Inclusion Advocate of the Year Award is presented to an individual “who advocates for traditionally underrepresented minorities in technology in Middle Tennessee through leadership, mentorship, and community activism, as identified through open nominations.” Nominees were judged on community impact and advocacy for underrepresented minorities in tech such as women or ethnic and racial minorities (Hispanic/Latino, Black/African American, Asian, Native American). 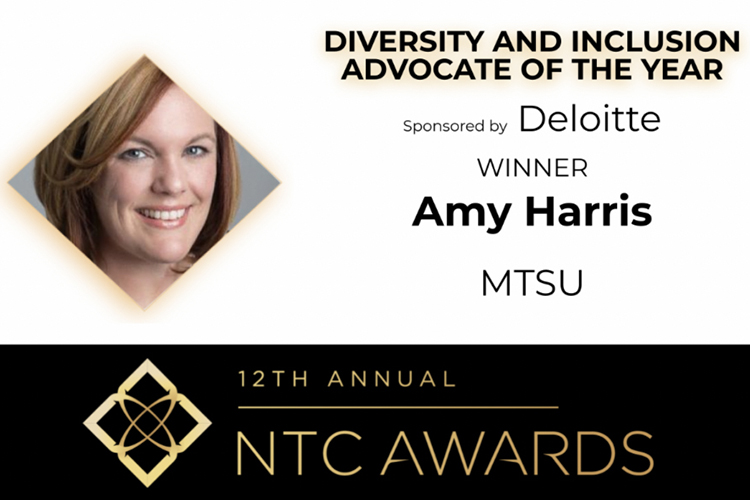 Harris, who received the NTC’s first Champion of the Year Award in 2019, serves as vice president of the advocacy organization Women in Technology of Tennessee, or WiTT. In accepting the award, she said the close collaborations between entities such as the NTC, WiTT and area higher education institutions have formed a solid foundation for the tech industry in the region and state.

“The good news is that we’re already doing the hard work,” she said during a backstage interview at the awards event. “… We all realized that a rising tide raises all ships. We want to see that raised for everyone.

“I think that’s our secret sauce. We have the talent and we have the ability to attract more talent. … The tech community here is so special.”

The event, co-hosted by Brian Moyer, CEO and president of the Greater Nashville Technology Council, and Derek Young, corporate leader, community leader, and author, brought together more than 400 registered virtual attendees — representing more than 97 technology companies and related organizations in Middle Tennessee, according to an NTC release.

There were also MTSU connections to the Diversity and Inclusion Initiative of the Year Award winner Asurion, with alumna Melinda Hudgins Noblitt (Class of ’07), senior manager of recruiting programs, accepting the award on behalf of the company.

This award is presented to the technology company or team in Middle Tennessee making an outstanding and successful effort to improve and promote diversity and inclusion within their organization.

See the list of all award winners at www.technologycouncil.com.

The Greater Nashville Technology Council is the leading voice and advocate for Middle Tennessee’s $8 billion information technology ecosystem and the 50,000 technology professionals who design, implement, manage and safeguard the technology that powers our region’s economy. The council’s mission is to strengthen and advance the technology sector by bringing together companies, philanthropies, government, universities and talent to create opportunity and growth.