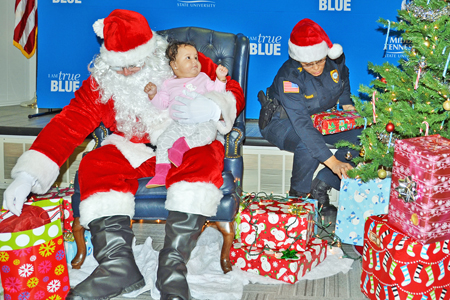 As a mother, the smile on Leranda Collier's said it all.

"That's all she wanted," the Murfreesboro resident said, as her daughter, Akira Lawrence, cried and cradled the beautiful pair of new skates she had just unwrapped during a Christmas party held Friday evening inside the MTSU Public Safety Department.

The effort targeted MTSU students with children as well as parents being served by the Domestic Violence Program.

Friday night’s party included plenty of donated food such as barbecue, pizza and dessert as well as an assortment of gifts distributed by none other than Santa himself (played by MTSU Police Officer Brett Huskey).

“It turned out great,” said Sgt. Vergena Forbes, the MTSU Community Policing specialist who spearheaded the effort. “We had tons of food from all of our donors. Families came out with the kids. They got to see Santa and got gifts from Santa … some of them were crying because they got exactly what they wished for.”

Forbes revived the campaign, last held in 2006, this year. The result was gifts ranging from bicycles to toy trains to new coats, thanks to the generosity of members of the Blue Raider community.

“This was a blessing,” said mom Gloria Broussard as she watched her three children, ages 7, 2 and 4 months, enjoy the new bicycle, toy train and Elmo doll Santa handed out just minutes earlier.

Sgt. David Smith assisted Forbes with the project, along with Jenny Crouch, Campus Recreation’s marketing and adaptive recreation coordinator, who represented the Golden Key Honor Society, and Valerie Avent, assistant director of the June Anderson Center and the OWLs adviser.