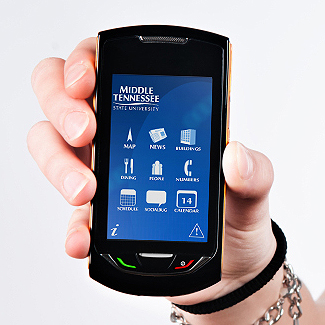 MTSU Mobile, an Android application developed by students for students at MTSU, is now available in beta form for anyone to test and use.

“We hope the new app will help students do things like look up class and schedule information, map classrooms and offices, get times and dates of sporting events and check the latest dining specials,” said Craig Murphy of Cordova, Tenn., a senior computer-science major at MTSU and a member of the student team of developers.

“As of this week, 170 students have downloaded the beta version and provided us with very helpful information on how to make it better.”

Murphy is one of five senior computer-science majors who have been working since March 2011 to develop MTSU Mobile. Others working on the project are Jason Bandy of Murfreesboro, Chris Johnson of Smyrna, Chelsea Rath of Franklin and Brandon Beard of Nashville.

The app started as a class project for Dr. Sung Kun Yoo, who later received a grant that provided funding for the five students to do development work this past summer. The team also received support from MTSU’s Information Technology Division.

“Earlier this year, Bruce (Petryshak, MTSU vice president for information technology and chief information officer) and I wanted to seek out ways for our division to assist students in real-world learning experiences,” said Tom Wallace, ITD associate vice president. “We heard about this project and wanted to help by assisting the students and providing financial support. They are a hard-working bunch, and their initiative and expertise has been great.”

The Android beta version currently provides maps to classrooms, offices and other points of interest on campus. Students can also access academic information through their Pipeline account, check calendars and find contact information for their professors.

The beta version can be downloaded at bit.ly/MTMobileApp.

“The plan is to have version 1.0 of both Android and Apple applications by early January,” said Murphy, who also works part-time for the ITD Help Desk. “We are working to add sports schedules, dining information and other functions for students to download by the spring semester.”

The MTSU Mobile team has lab space in the Parking Services Building and meets with ITD staff every Monday. Students already have worked more than 500 hours building the MTSU Mobile app from the ground up, said team member Bandy.

“It’s been a pretty steady job,” he said. “I have learned a great deal, not only the programming but what it takes working with a client, and actually have learned a lot more about MTSU. This has provided me with experiences that I would have never gotten in the classroom.”

After MTSU Mobile 1.0 is finished, Wallace said, there are plans to continue the student app team. Spots for new members will open up soon as the seniors leave, he added, so interested students can email mobile.dev@mtsu.edu to obtain more information.