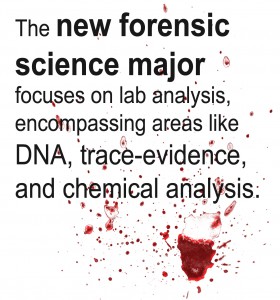 When MTSU's Biology, Chemistry, and Criminal Justice Administration departments joined forces to offer a bachelor's-level forensic science major, Biology Department chair George Murphy didn't worry about attracting students to the new program.  Thanks to the popular fascination with crime shows, the interest as already there.  Launched just last fall, the program boasts 40 enrollees representing a broad demographic -from teenagers right out of high school to middle-aged students wanting a new career in a dynamic field.

MTSU Provost Brad Bartel, who as a professor of anthropology in North Carolina worked some crime scenes, says the left-brain part of the job might be a rude awakening for someone whose only knowledge of forensics comes from "crime scene investigation fantasy shows."

And that has happened, Murphy says.  "There are some students who watch CSI and say, 'We want to major in forensics! -and then they look at the curriculum and pale at the classes they'd have to take."

MTSU's forensic science major -the only bachelor's-level forensics program in the state, and one of only three in the Southeast, is rigorous, requiring 30 hours each of chemistry and biology and 12 hours of criminal justice.  Unlike most other undergraduate forensics programs, of which there are fewer than 20 accredited in the country, it also requires a junior and senior seminar, as well as a 160-hour internship.  The focus of the program is lab analysis -from computer forensics to DNA, chemical, and hair analysis.

For the tenacious, however, there's a promising payoff.  MTSU designed the program with input from the Tennessee Bureau of Investigation, which will offer internships in its high-tech Nasvhille lab and its auxillary labs in Memphis and Knoxville.  Private labs have expressed interest as well, Murphy says.

Such hands on training makes these students highly employable once they graduate, says TBI director Mary Gwyn, a '85 MTSU grad.

"If you can get someone who already has knowledge and understanding of that particular venue, then it makes the training easier and shorter, and it puts that person to work a lot quicker.  We're always looking for that," Gwyn says.

This sort of practical lab experience, much like the crime scene work Dr. Hugh Berryman does with FASR team, is highly unusual at the undergraduate level, Bartel says.  It's really amazing opportunity for undergraduate students to get equivalency training to what they would normally get at the master's level at another institution."

MTSU can apply for accreditation for the new degree in 2012.  In the meantime, Murphy says, he hopes to get the major into the Academic Common Market, which allows students from nearby states that don't offer an equivalent program to apply at MTSU's at a discounted rate.