Song broadsides were a common and inexpensive medium through which popular songs were commercially disseminated prior to the advent of sound recordings. Song broadsides—also known as song sheets or slip ballads—typically consist of a single sheet of paper, approximately 6” x 9”, with the lyrics of a song printed within a decorative border. Since they nearly always contained only text and no engraved music, broadsides were cheap and simple to produce. Many broadsides were text-only versions of popular songs that were also available in sheet music form from music publishers, but others contain songs that were published in no other medium. 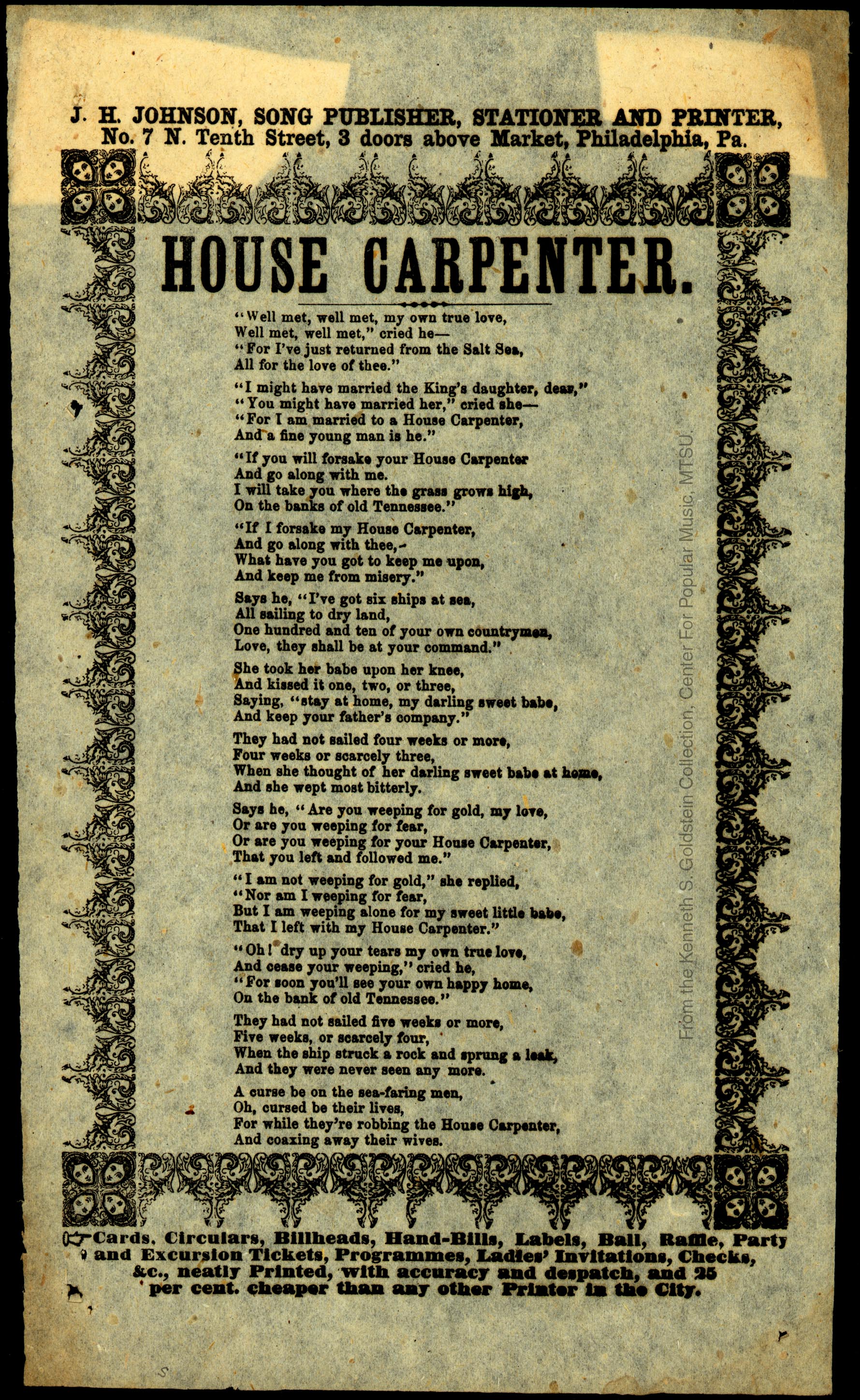 The Kenneth S. Goldstein Collection held by the Center for Popular Music consists of nearly 3,300 American song broadsides, from more than 120 publishers. While most broadsides carry no publication date the items in the Goldstein Collection range from the late eighteenth to the early twentieth centuries, with the bulk having been published between 1840 and 1880. The collection provides an exceptional window through which to view and study American taste and culture of the time. Numerous older traditional ballads were printed in broadside form, as were contemporary narrative songs that documented natural disasters, battles, political events, social movements, tragic accidents, and the concerns of daily life. Sentimental and comic songs were plentiful.

The mission of the Center for Popular Music is to promote the study of American popular and vernacular music, with emphasis on the role of music as an integral part of American cultural and social history. These broadsides are historical documents. Many contain language and convey stereotypes that reflect the culture of a particular period or place in the past but that are regarded as offensive in modern times. They should therefore be viewed and studied in the context of theera in which they were created. They are presented as part of the historical record and do not necessarily represent the views of the Center for Popular Music or its staff.

The digitization and cataloging of the Goldstein collection was supported by a Preservation and Access grant from the National Endowment for Humanities. Work on the project was carried out from July 2003 to July 2005. Any views, findings, conclusions, and recommendations expressed in or on this website do not necessarily reflect those of the National Endowment for the Humanities. 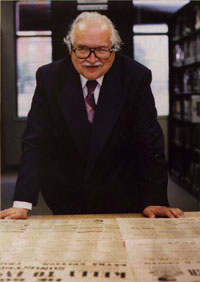 Kenny Goldstein was a man of many facets who became an important friend of the Center for Popular Music late in his life. During his career he was a scholar, professor, folklorist, record producer, festival organizer and more. Most essentially, he was a collector who amassed a remarkable personal library of books, sheet music, song books, recordings and other materials. The Center was grateful to become the repository for Dr. Goldstein's collection of American song broadsides and songsters shortly before his death in 1995.

What is a Broadside?

Song broadsides (sometimes also called song sheets, song slips, or slip ballads) were a common and inexpensive means through which popular songs and ballads were commercially disseminated throughout Northern and Western Europe, and the lands colonized by people from these areas, from the sixteenth to the early twentieth centuries. Broadsides normally contained only lyrics, as simple text was much easier and cheaper to typeset and print than was musical notation. Thus, whereas sheet music consumers were musically literate and possessed some degree of education and presumably some means, the audience for broadsides consisted of music-lovers who occupied a lower position on the social and economic ladder. Where a single piece of sheet music might sell for 25-60¢ a copy, broadsides sold for a penny. Sheet music was sold in music stores; broadsides in news stalls and bookstores, or at circuses, minstrel shows, medicine shows, political rallies, temperance meetings, and vaudeville performances. Sheet music was intended to be profitable; broadsides were so cheap that they sometimes functioned as promotional items for merchandisers of various sorts.

Sheet music was meant for the piano in the parlor; broadsides for the pocket. It was common practice for purchasers of sheet music to collate their collections and have them bound in handsome volumes (often with the owner’s name in gilt lettering on the cover) that lay in elegant repose on the music rack of the parlor piano. Broadsides rarely were accorded such pride of ownership. As a result relatively few survived, and they are quite rare today. Out of a total of approximately 65,000 items in the Center for Popular Music’s sheet music collection (in which the broadsides are included), there are only approximately 3,300 broadsides. The Kenneth S. Goldstein Collection of American Song Broadsides was assembled over a period of ten years through active, aggressive collecting on the part of the late Kenneth Goldstein, one of the country's leading folklorists. At the time it was acquired by the Center for Popular Music in 1994 it was believed to be the largest private collection of such items in the country. It includes the products of more than 160 publishers.

The typical format of a song broadside is simple in design, consisting of a single sheet of paper with the lyrics of one or two songs (occasionally more) printed within a decorative border. They are of fairly consistent size (about 6" x 9") and are printed on inexpensive, thin paper. Most are black on white but some of the most interesting include color, either hand-tinted or printed. Most broadsides carry no publication date, but the items in the Goldstein Collection range from the late eighteenth to the early twentieth centuries, with the bulk falling roughly between 1840 and 1880. The size and relative uniformity of the materials makes the collection an ideal candidate for an efficient scanning and digitization project.

Song broadsides provide a window through which modern researchers can glimpse the musical tastes of everyday Americans of the nineteenth century. Many broadsides were text-only editions of the popular songs that were also available in sheet music form from music publishers, while others contain items that were published in no other medium. Numerous older traditional ballads were printed in broadside form, as were contemporary narrative songs that documented natural disasters, battles, political events, tragic accidents, and other aspects of daily life. Some broadsides include an indication of the melody to which the lyrics were supposed to be sung, but most did not. Purchasers were assumed to know the correct melody, or, as in the case of traditional folk singers, to supply one that they already knew and that was metrically appropriate. Often the songs on broadsides were parodies of well-known songs: e.g. “My Good Old Irish Home,” intended to be sung to the tune of “My Old Kentucky Home” by Stephen Foster.

However, the importance of broadsides is not limited to popular music historians. Folklorists have long recognized that broadsides occupy a crucial nexus between oral tradition and print. Though their heyday ended in the nineteenth century, broadsides continued to be an important form of dissemination in the South well into the twentieth century. Musicians such as Kentuckians J.W. Day and Dick Burnett sold printed "ballets" (i.e. ballads printed in broadside form), sometimes of older songs, and sometimes of their own compositions about important events such as murders or hangings. Much of the repertoire of the first generations of country music performers, and later ones with strong ties to tradition, can ultimately be traced to broadsides.

Because much of the song material contained in broadsides was topical in nature, these documents are also of importance to social and cultural historians. Tragedies, disasters, political campaigns, wars, battles, popular trends, and social movements were all chronicled and disseminated via broadsides. The song, “Hoops No. 2. What a Ridiculous Fashion,” issued by Andrews, in New York, illustrates the sort of social commentary that one can find in the songs published on broadsides. It was to be sung to the tune of the nineteenth-century popular song, “King of the Cannibal Islands.” The lyrics of this item describe in light humor the fashion of ladies wearing large hoop petticoats, and read in part:

Now Crinoline is all the rage with ladies of whatever age,
A petticoat made like a cage—oh what a ridiculous fashion!
‘Tis framed by with hoops and bars of steel, or tubes of air which lighter feel,
And worn by girls to be genteel, or if they’ve figures to conceal,
It makes their dresses stick far out, a dozen yards at least about,
And pleases both the thin and stout, oh, what a ridiculous fashion. This song gives insight into changes in fashion and the attitudes of those who were not pleased by the trend.

In some cases, the broadsides were published in a format that also served as stationery. Seventeen of the items in the Goldstein collection, all from the period of the Civil War, contain hand-written letters to friends and loved ones, and thus offer yet another level of documentation.

The Center for Popular Music was awarded a National Endowment for the Humanities Preservation and Access grant to digitize and catalog the Kenneth S. Goldstein Collection of American Song Broadsides from July 2003 to July 2005. The purpose of this project is to provide greater awareness of and access to these fragile ephemeral documents that document a vital part of American culture.

Each original song broadside was scanned using a Microtek ScanMaker 9600 XL flatbed scanner at 600 dpi and saved in TIFF format. From the master TIFF file, two JPEG files were created for Web access: one “thumbnail” image at 480 pixels and one printable image at 300 dpi with varying original dimensions. All files reside on the Center's dedicated image server. Copies of the master image files were archived on Mitsui CD-R media and stored in a separate facility.

Routine quality control inspections were made for both digital files and cataloging records. Master image files were checked for quality by sampling 10% of the TIFF image files at 100% magnification, or 1:1 pixel ratio for compliance with digital imaging guidelines. Quality control of the enhanced catalog records and re-keyed text was checked by various project staff members using a defined checklist, the spell check option in DB/Text, and comparison of the printed copy with the original.

While transcribing the lyrics of the song broadsides, every attempt was made to maintain the spelling, capitalization, and spacing of the original document. Brackets indicate omitted text or letters.

National Endowment for the Humanities for making the project possible.
AAS, especially Michael Gibney for the help with publisher dates.
Rosemary Kew for translating the French and German broadsides.

Any views, findings, conclusions, and recommendations expressed in or on this website do not necessarily reflect those of the National Endowment for the Humanities.

Copy Restrictions: Duplication of images is allowed for research purposes. All original song broadsides are in the public domain. The user is responsible for all copyright compliance.

John Duffy. Early Vermont broadsides / introd. by Mason I. Lowance, Jr. Hanover, N.H. : Published for the University of Vermont by the University Press of New England , 1975.

Ford, Worthington Chauncey. The Isaiah Thomas collection of ballads "Reprinted from the Proceedings of the American Antiquarian Society for April, 1923." Worcester , Mass. , The Society, 1924.

The Judgment of experts : essays and documents about the forgery of the Oath of a freeman. Worcester : American Antiquarian Society, 1991.

Lowance, Mason I., Jr. and Georgia B. Bumgardner. Massachusetts broadsides of the American Revolution.

Stoddard, Roger E. Poet and printer in colonial and federal America : some bibliographical perspectives. Worcester , Mass. : Published by the Society, 1983.

Sullivan, James D. On the walls and in the streets : American poetry broadsides from the 1960s. Urbana : University of Illinois Press , c1997.

Wegelin, Oscar. Early American poetry: a compilation of the titles of volumes of verse and broadsides by writers born or residing in North American north of the Mexican border. 2nd ed., rev. and enl. Gloucester , Mass. : P. Smith, 1965, c1930.

Wolfe, Richard J. Early American music engraving and printing : a history of music publishing in America from 1787 to 1825 with commentary on earlier and later practices. Urbana : Published in cooperation with the Bibliographical Society of America by the University of Illinois Press , c1980.