On Monday, January 29th at 2:30PM the Center for Popular Music hosted a Book Talk with NPR's music critic and correspondent, Ann Powers. She presented her new book, Good Booty: Love and Sex, Black and White, Body and Soul in American Music, to a standing-room-only crowd in the Center's reading room.

Previous books by Ann Powers include Weird Like Us: My Bohemian America; Tori Amos: Piece by Piece; and Rock She Wrote: Women Write About Rock, Rap, and Pop. 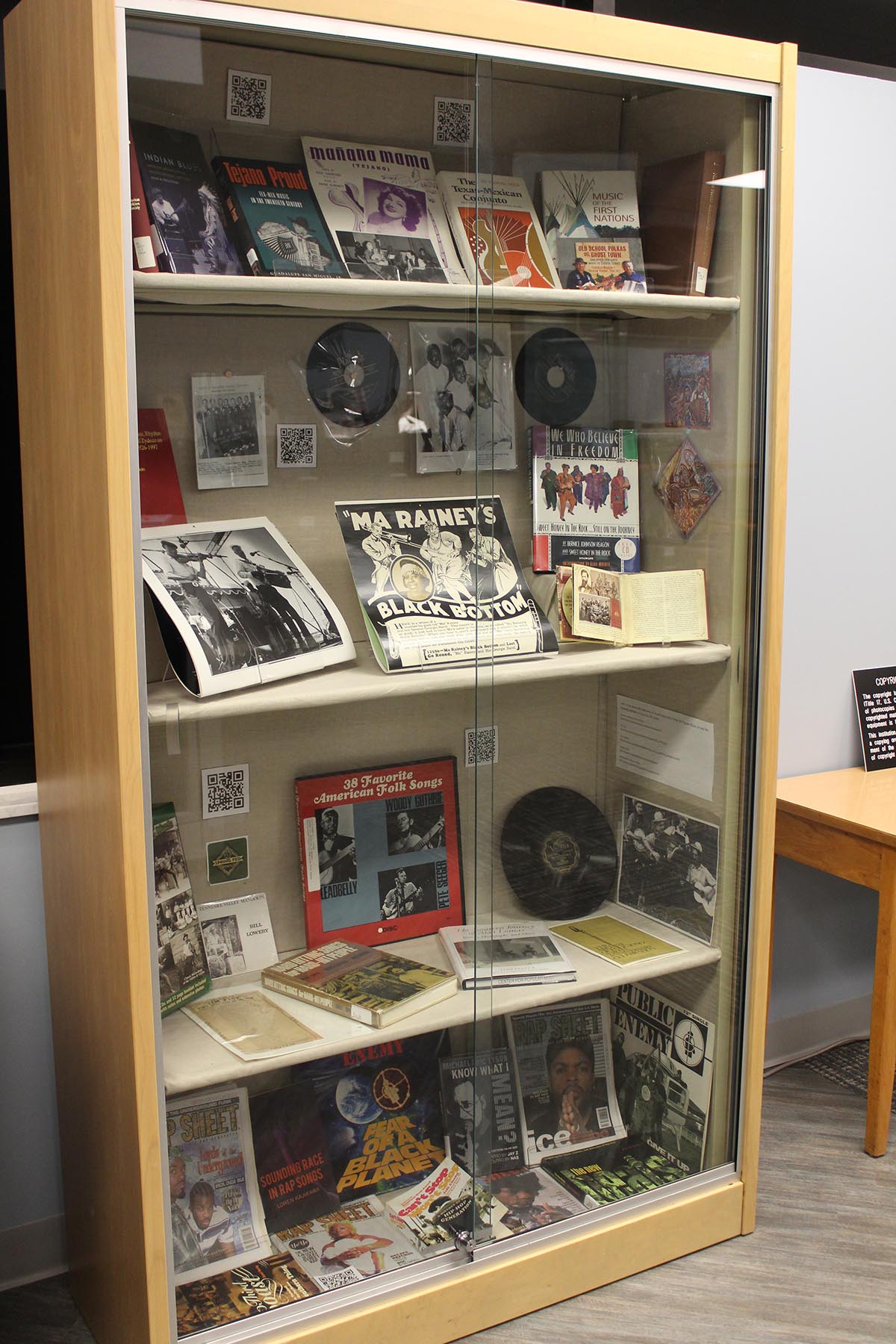 Communities through time and place tellin' their stories, curated by Katie Rainge-Briggs, captures local music that was made by ordinary people expressing their life experiences.  Thus, these diverse music communities gifted a larger audience with an extraordinary sonic experience through a process of commercialization.

The following two exhibits were curated by Sam Shaefer: 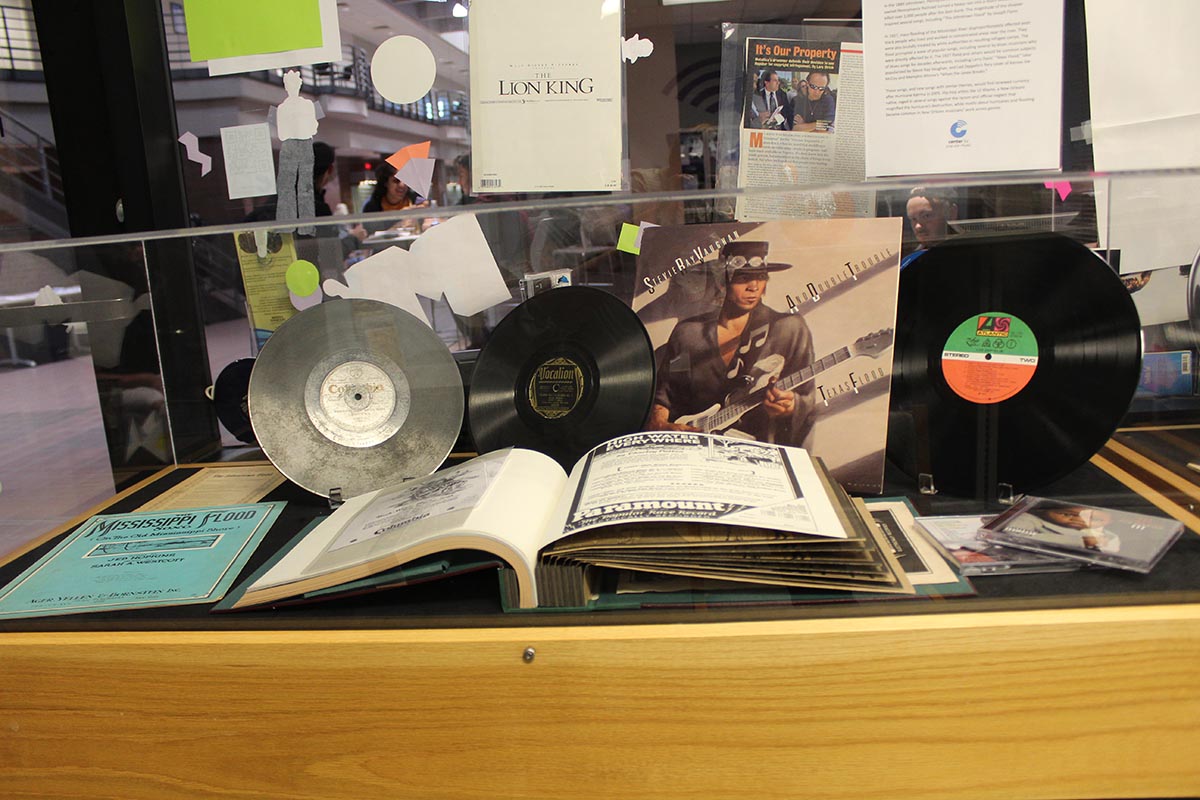 High Water Everywhere: Floods and Hurricanes in Popular Song uses materials from the Center for Popular Music's archives to showcase records, reproductions of advertisements, lyric sheets and CDs relating to songs about the human aftermath of hurricanes and floods in American history. Songs reacting to these events from over 100 years of American popular music are featured, from the Johnstown Flood of 1889 to Hurricane Katrina in 2005. 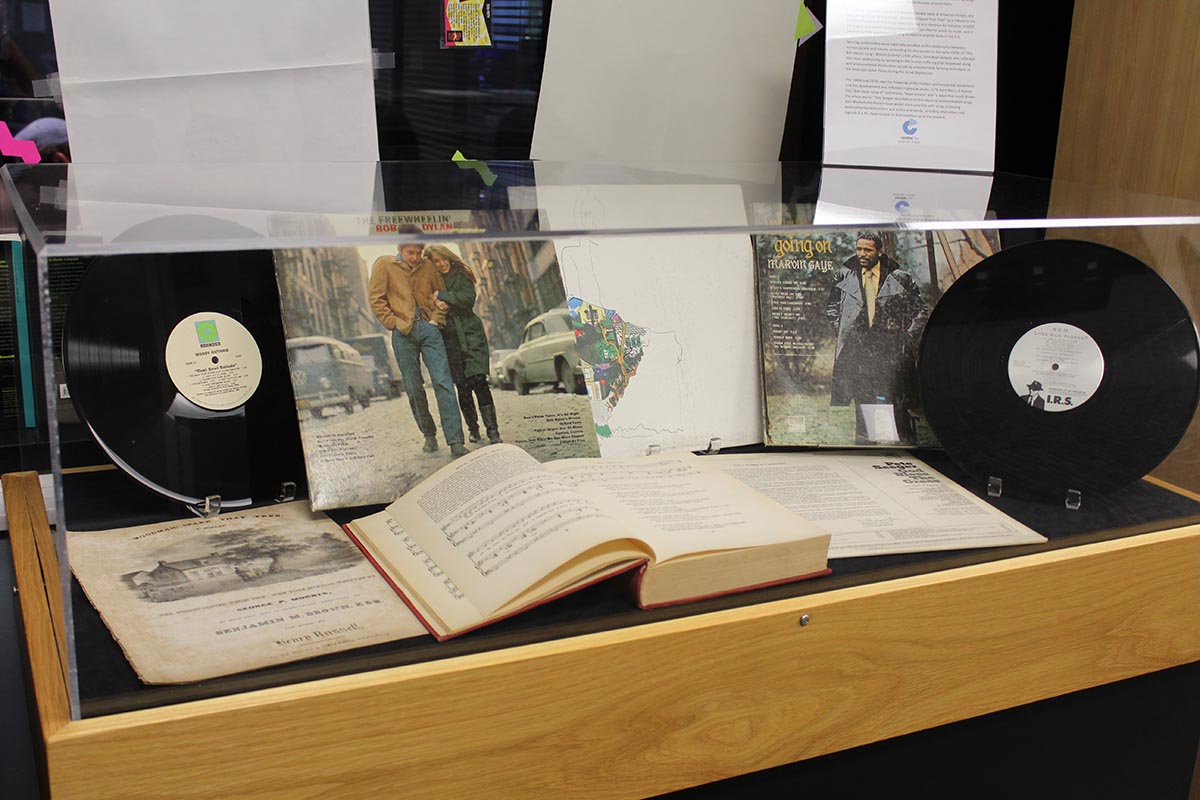 "They Paved Paradise and Put Up a Parking Lot": Environmentalism and Popular Music tracks music made out of concern for America's natural environment from the 1830s through the 1980s. Using examples of sheet music, poet Carl Sandburg's popular "American Songbag," and several records from CPM's archives, songs representing a variety of contexts are represented, including deforestation in the 19th century, mass farming issues of the early 20th century, and the modern environmental movement that coalesced in the 1960s.

Unapologetic Loyalty: Fan Culture in Popular Music put fan scrapbooks, punk fanzines, fan club materials, backstage passes, and more on display for you to see. This exhibit was put together by our archivist, Rachel Morris, and features some real gems from the collection. 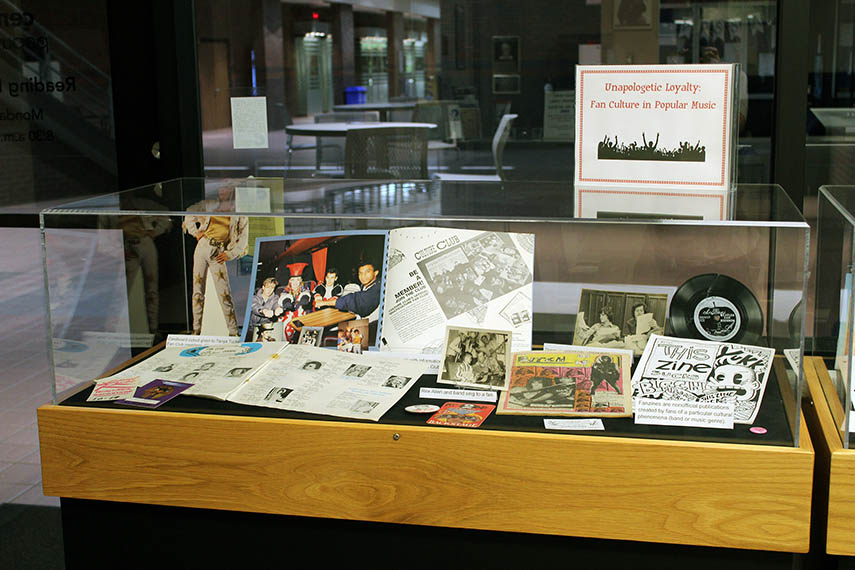 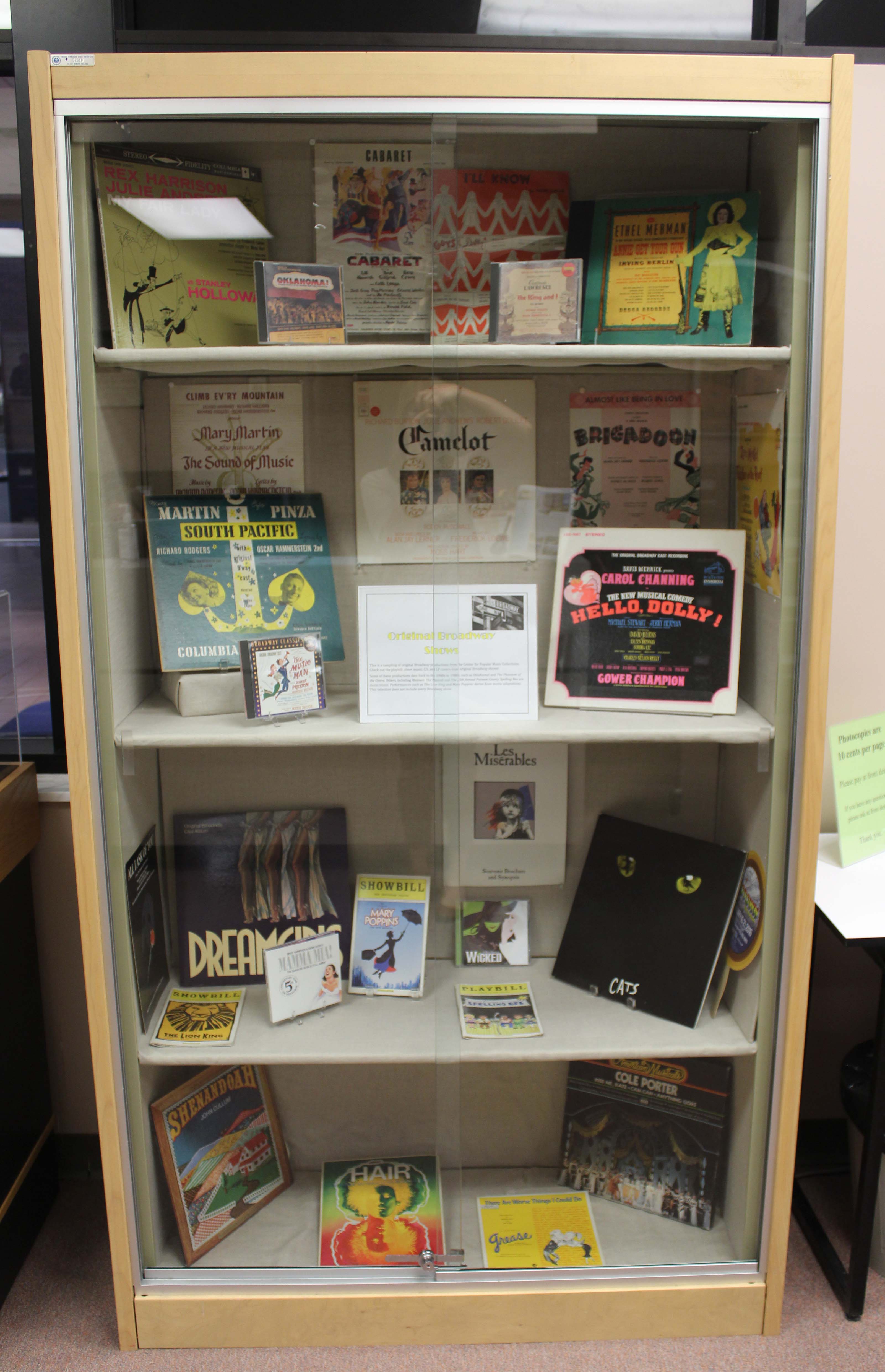 A second display in our tall case featured materials from the Center for Popular Music's collection relating to Original Broadway Shows. This exhibit was curated by CPM Graduate Assistant, Emily Boersma. 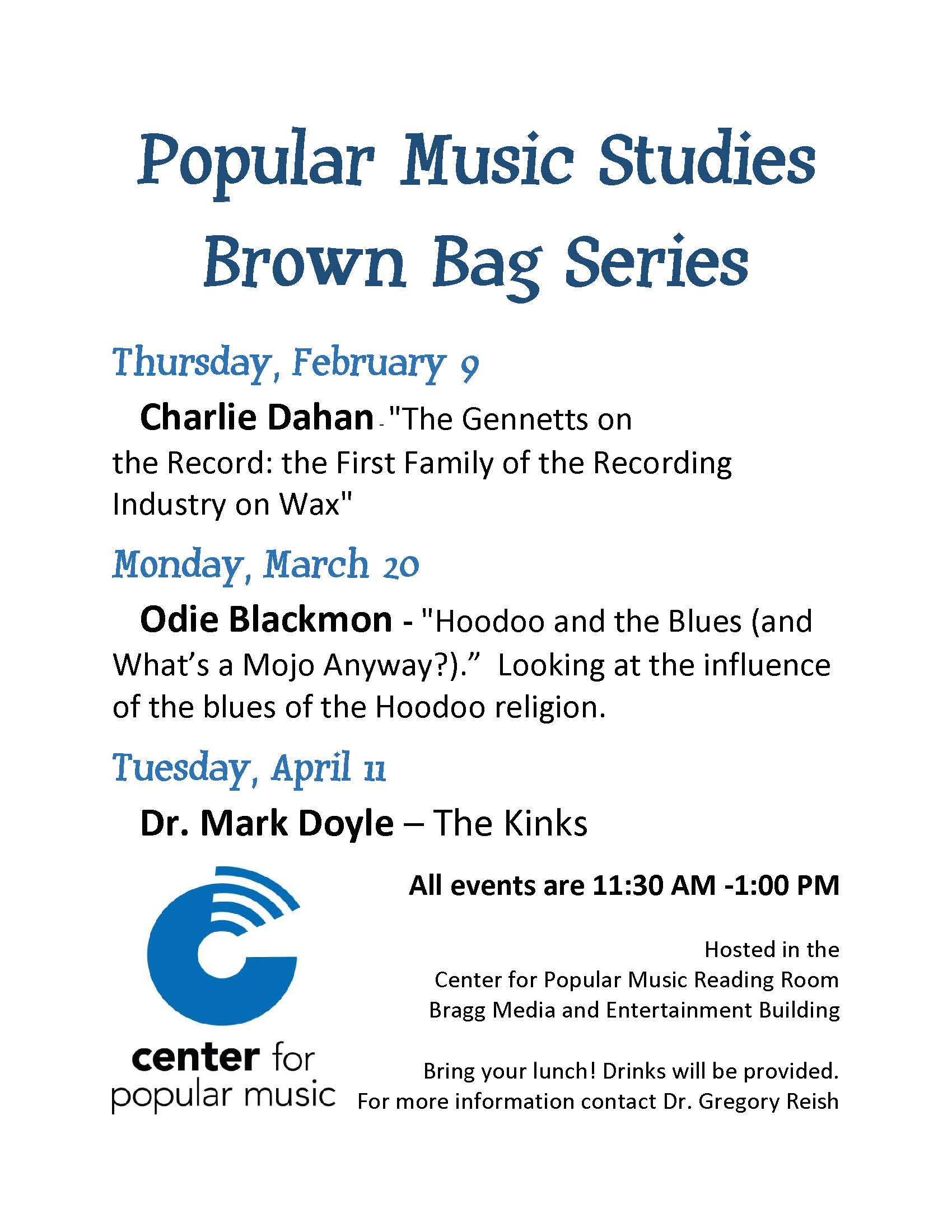 The Food, Glorious Food exhibit featured items from our collection having to do with food branding and marketing in American popular music and was put together by archivist, Rachel Morris. 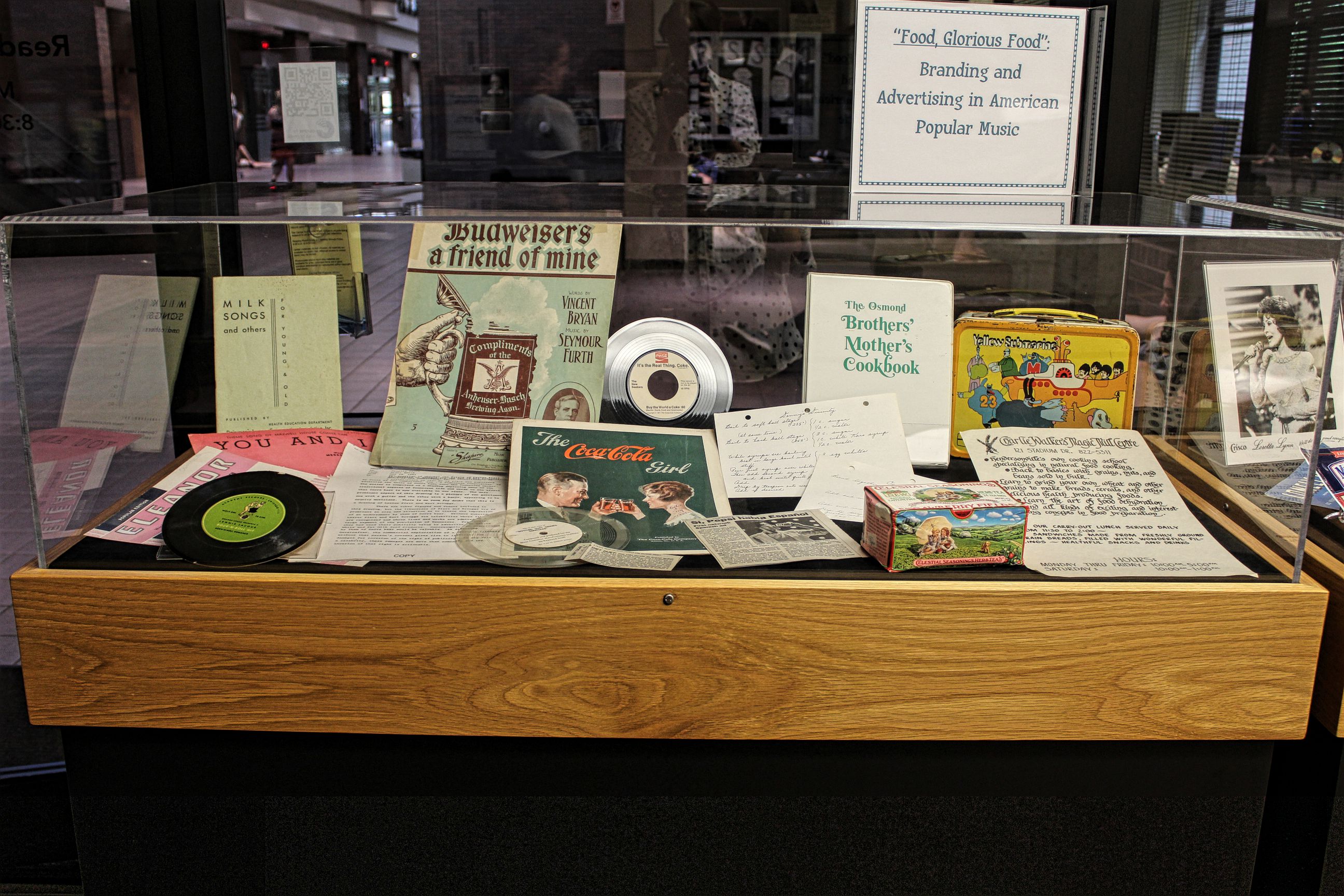 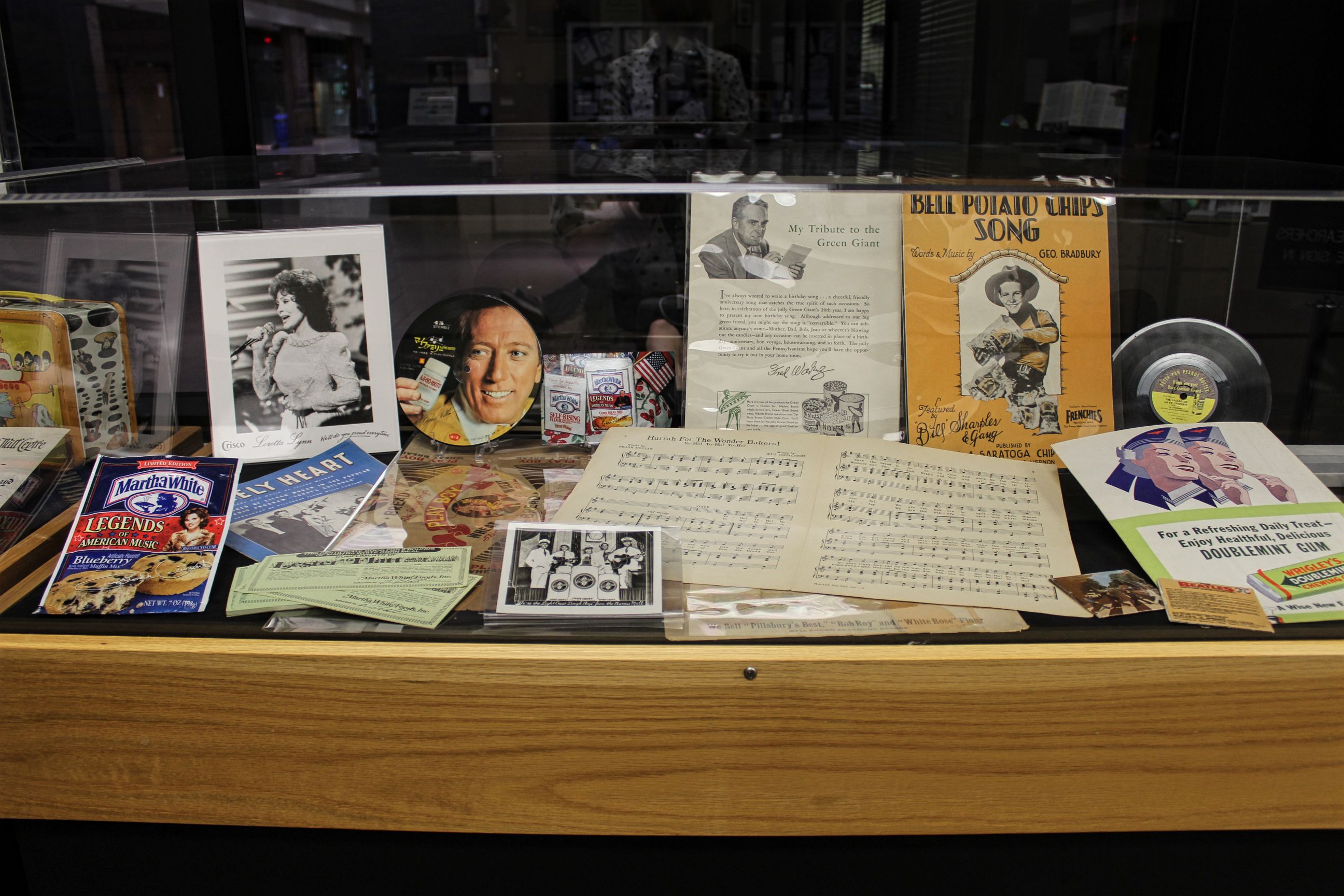 Our Operation Song exhibit was put together by Library Assistant Olivia Beaudry. It was created for an Operation Song event and honors our active servicemen and veterans. This exhibit featured items from our collection having to do with all branches of the military. You can find out more about Operation Song, a Nashville, Tennessee based 501(c)(3) non-profit that empowers veterans and active duty military members to tell their stories through songwriting by clicking the link here. 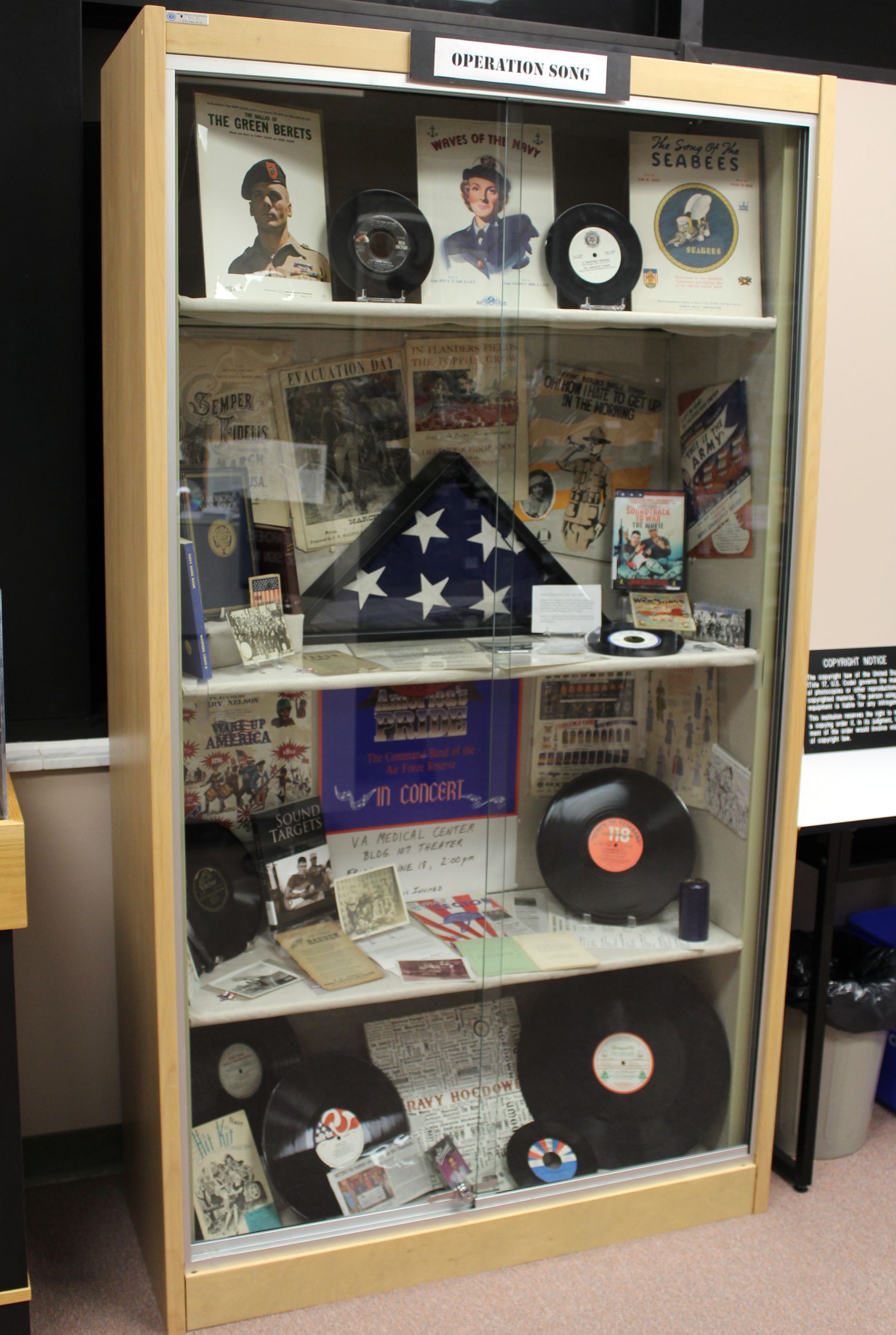 An Evening with Charlie McCoy 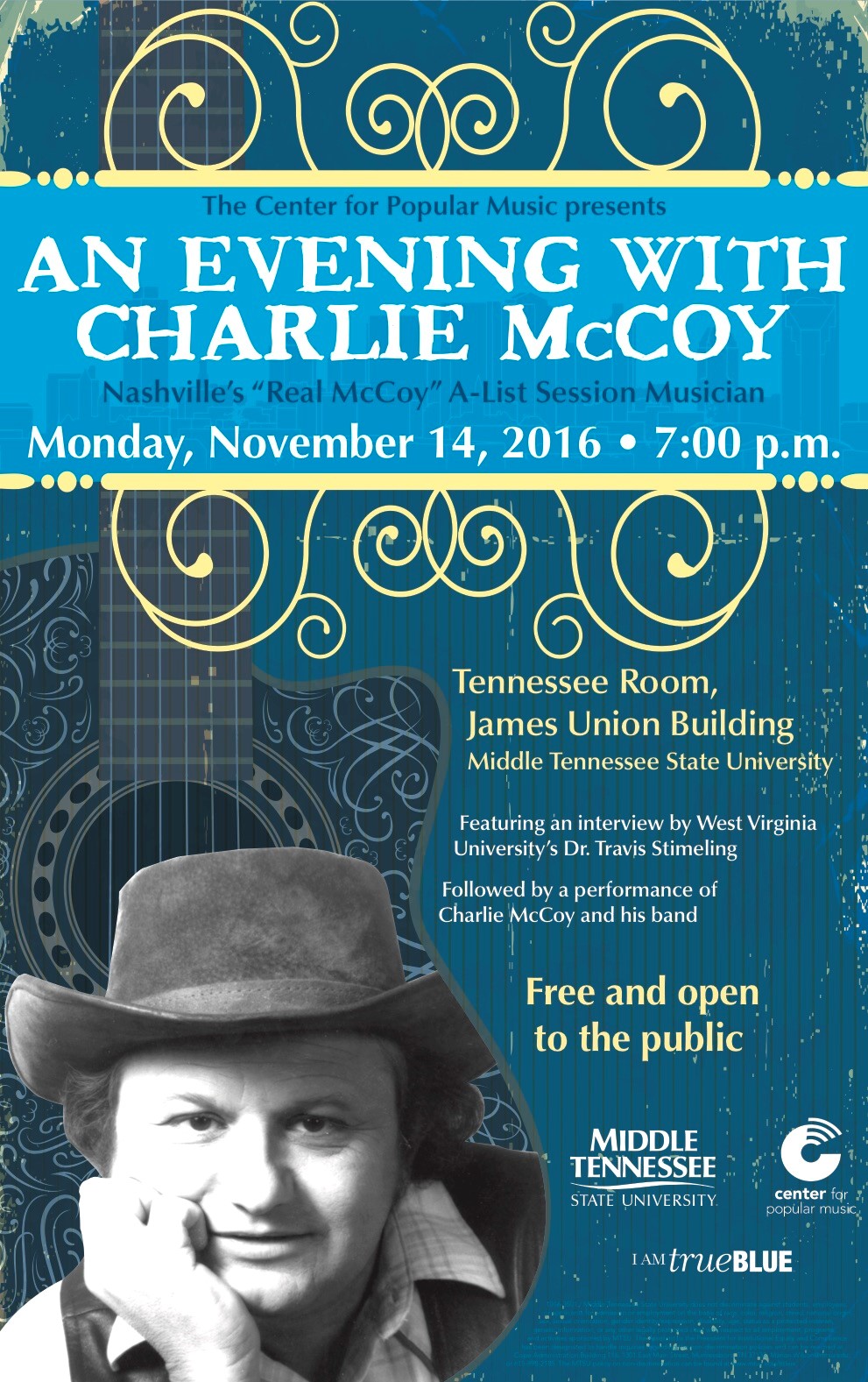 The Center's event with Charlie McCoy on Monday, November 14th was a big success. Thank you to all who attended. Charlie McCoy, the muli-instrumentalist and singer whose long career as a session musician made him one of the most recorded and demanded members of the “Nashville Cats,” will discuss his extraordinary career with noted country music historian Dr. Travis Stimeling in the first half of the evening’s program. The second half will be a concert performance by McCoy with a backing band of Nashville A-list players.

Jonatha Brooke at the KUC Theater

On Thursday November 3, 2016 songwriter and recording artist Jonatha Brooke visited the College of Media & Entertainment at Middle Tennessee State University. Ms. Brooke was interviewed by Professor Beverly Keel as the guest artist for a Tom T. Hall “Writers in the Round” event at 7:00pm in the Keathley University Center Theater on the MTSU campus. This event was free and open to the MTSU community and the public.

This “Writers in the Round” event is part of the Tom T. Hall “Writers Series” and is supported by the College of Media & Entertainment, Center for Popular Music, and the Department of Recording Industry.

An interview with Peter Guralnick 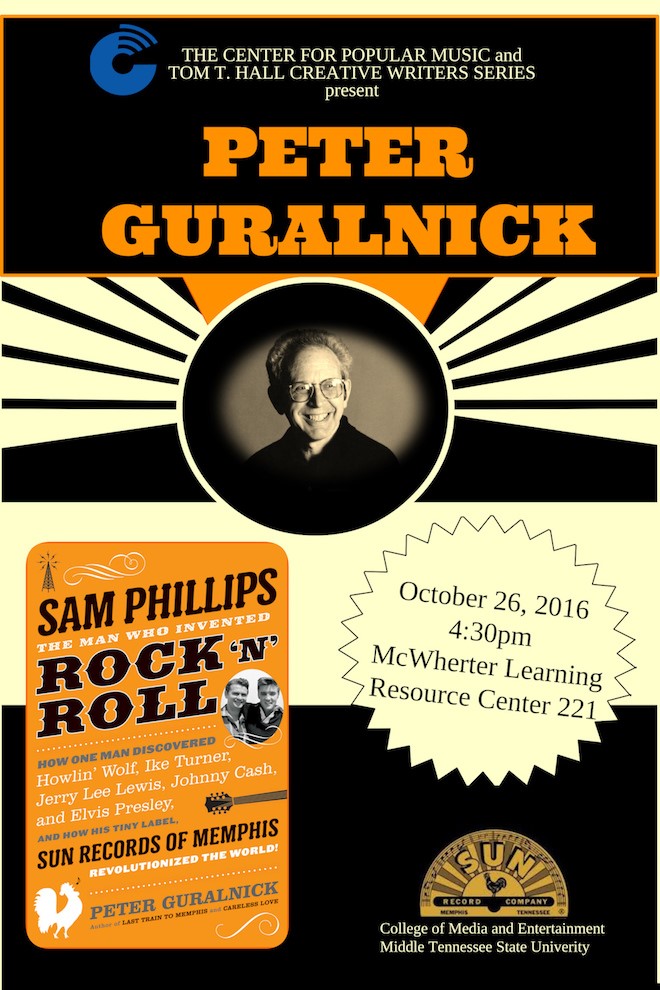 Author Peter Guralnick, one of the most acclaimed music biographers and critics of our time, participated in a live interview with CPM Director Dr. Greg Reish about Guralnick’s latest book, Sam Phillips: The Man Who Invented Rock ‘n’ Roll. Guralinck is also the author of award-winning books about Elvis Presley, Sam Cooke, Robert Johnson, and other American roots-music topics.

This event took place on October 26th at 4:30 pm in the McWherter Learning Resource Center (LRC) room 221. It was free and open to the public!

The CPM has an action-packed calendar for the upcoming Fall semester, with speakers, performers, and other exciting programs. Mark your calendars and stay tuned to our website and social media pages for locations and other information. All events are free of charge and open to the public!

Blues-rock singer Tracy Nelson, who Entertainment Weekly called, “blues practitioner of tremendous vocal power and emotional range,” will be on campus to sing some of her magnificent catalog and talk about her amazing career. Tracy started her career in Chicago in the 1960s, learning from Charlie Musselwhite, Muddy Waters, and Howlin’ Wolf, then became an important part of San Francisco’s psychedelic scene as the lead singer of Mother Earth. Since then she’s worked with Willie Nelson, Marcia Ball, and other icons of American roots music.

Roots-rock band The Americans, featured in the new film American Epic (produced by Jack White, T-Bone Burnett, and Robert Redford) will present a program exploring the earliest period of roots music commercial recordings, from the 1920s and 1930s.

Author Peter Guralnick, one of the most acclaimed music biographers and critics of our time, will do a live interview with CPM Director Dr. Greg Reish about Guralnick’s latest book, Sam Phillips: The Man Who Invented Rock ‘n’ Roll. Guralinck is also the author of award-winning books about Elvis Presley, Sam Cooke, Robert Johnson, and other American roots-music topics.

A pillar of the Nashville Sound and one of the most versatile session musicians in popular music history, Charlie McCoy will speak about his extraordinary career and perform a concert backed by a group of Nashville pros. This program will be hosted by Dr. Travis Stimeling of West Virginia University, who is one of the world’s leading authorities on Nashville’s classic era of recording.

This number 1 hit pop songwriter will talk about her new book, Confessions of a Serial Songwriter, with the coordinator of MTSU’s commercial songwriting program, Prof. Odie Blackmon.

CPM in the News

The Center's newest Grammy grant to digitize our collection of bluegrass audio recordings from Marvin Hedrick has been getting a lot of buzz! We're so glad that everyone is as excited about this project as we are. Please check out some of the latest articles and interviews regarding the collection and the grant project below.

The project is underway now, and we'll continue to update you as it progresses! Thank you for your support.