As we all know by now, Tennessee’s new funding model for higher education places the highest priority on student progress, matriculation, and graduation success. Gov. Bill Haslam’s Drive to 55 initiative seeks to improve Tennessee’s workforce by increasing the percentage of Tennesseans with postsecondary degrees or certificates to 55 percent.

Last academic year, we made great strides in helping our students stay enrolled and on a clear path to earning a degree. Our achievements can be largely attributed to our ambitious Quest for Student Success, which has proven to be an effective roadmap in the effort to improve retention and graduation. 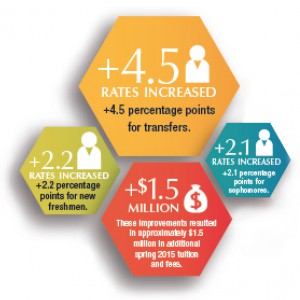 The near future also looks bright. Although official data will not be available until census on September 7, 2015, trend projections have consistently indicated that MTSU will achieve record or near-record retention increases in the upcoming semester for first-time freshmen, new transfer students, and sophomore students.

The Quest is helping redefine and refocus our efforts and investments in recruitment, advising, and classroom teaching to better meet the needs of our students. With broad support from the University’s central administrative team, led by Provost Brad Bartel and under the direction of Dr. Rick Sluder, vice provost for student success, and the leadership of the academic deans, department chairs, and faculty, our plan has shown tangible progress.

Driving those increases are a number of specific initiatives:

•  The redesign of more than 20 courses  has enhanced the learning environment for students, enabling them to better master the material and offering a greater chance for success. By the close of the fall 2015 semester, 28 courses will have been through some form of redesign. Eleven of MTSU’s top 12 most predictive and most enrolled courses will have been redesigned. •  The recent hiring of 47 new college-based academic advisors  has greatly enhanced our ability to effectively address critical advising and academic support needs. •  The use of new predictive analytics software  has helped us sharpen our focus on areas that have the greatest opportunity to positively affect academic needs and achieve measurable, sustainable results. 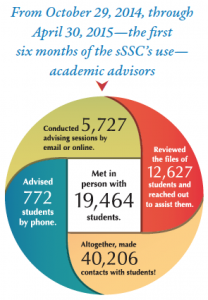 I am proud to say these early successes have not gone unnoticed. An article in the March 13 issue of The Chronicle of Higher Education says that MTSU is at the forefront nationally of efforts to improve retention and graduation, and many of the programs we are implementing are being adopted by institutions around the country (See page 4) . MTSU’s student success efforts were also pointed out in the Washington Post on June 14, 2015. And most recently, the Association of Public and Land-grant Universities named MTSU one of five finalists nationally for its Project Degree Completion Award recognizing institutions that employ innovative approaches to improve retention and degree completion.

We have long said that we are a student-centered institution, and I am pleased that our actions are validating that for students and our peers. But with this recognition it’s critical that we not rest on our laurels. There remains much to be done. Looking forward to the 2015–16 academic year, in addition to the previously mentioned efforts underway, there are a number of other activities we are launching: •  A total of twenty-eight (28) Raider Learning Communities are offered in fall 2015. Students in RLCs attend paired courses where instructors create collaborative learning experiences to not only magnify student learning, but also allow them to build personal and professional networks. •  Our highly successful Scholars Academy  will be expanded to serve greater numbers of first-generation and/or at-risk students as they prepare for college. •  To continue to improve sophomore retention, a Second-Year Experience  program has been developed. •  Restructuring our financial aid program to provide better incentives and support for students who make sustained progress toward completing their degree. •  Initiating a new program called Rebound , which provides academic support and assistance in retaining freshmen who had below a 2.0 at the end of the fall 2014 semester.

For example, a Finish Line Scholarship has been developed for new freshmen and transfer students that will reward students who stay on track to finish their degrees by taking an average of 15 hours each semester. •  Expanding our dual-enrollment program . Courses counting for both high school and MTSU graduation requirements are available at our partnering high schools, on the MTSU campus, and online. •  Attracting non-traditional students to our campus through unique programs including the Recapture program  that focuses on adults who earned a significant number of college credits but did not graduate. •  Building on our existing efforts to support our military students and veterans.

Clearly, the University is committed to the success of every student, and we have committed considerable resources to making MTSU a success-oriented institution. However, the interactions you have in your classrooms and in your encounters with students form the basis of everything we do . I would urge each of you to take a look at your own students and classes, asking yourself “What can I do to make this experience better, more meaningful, and more effective?” I ask—no urge— each of you to be accountable and accept your responsibility to help take us to an even higher level of achievement. Much can be done if we all work together.

Best wishes for a wonderful fall semester, and I look forward to an even greater year for our Blue Raider family!