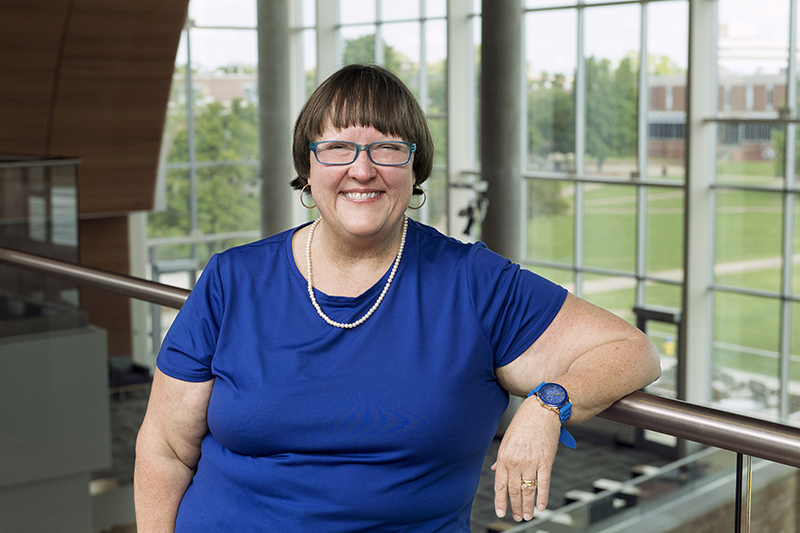 Judith Iriarte-Gross is a professor of chemistry and director of the Women In STEM, Science, Technology, Engineering and Mathematics, (WISTEM) Center at MTSU. She earned her B.S. and M.S. in Chemistry from the University of Maryland, College Park and her Ph.D. in Inorganic Chemistry from the University of South Carolina. She completed a post-doctoral research project which focused on inorganic polymers at Southern Methodist University. Before joining Middle Tennessee State University (MTSU) in 1996, she worked as a chemist for the FDA and as a chemistry lab manager in the plastics industry.

Dr. Iriarte-Gross volunteered with local Expanding Your Horizons, EYH, conferences in the Dallas-Fort Worth area from 1990 to 1996. After moving to Murfreesboro TN in August 1996, where she joined the faculty at MTSU, Dr. Iriarte-Gross started the first EYH in Tennessee which has since served over 10,000 girls. EYH introduces middle and high school girls to STEM role models and mentors through hands-onDr, girls-only workshops. Girls from Tennessee as well as southern Kentucky, northern Alabama and Georgia have attended the MTSU EYH. Tennessee is home to several EYH conference sites including Volunteer State Community College and  the National Institute for Mathematical and Biological Synthesis at UT Knoxville. Today, Dr. Iriarte-Gross and her team of role models and mentors host Tennessee Girls in STEM, TGIS, formerly known as the MTSU EYH. The 26th TGIS Conference is being planned for Fall 2022.

Dr. Iriarte-Gross has been a PI or Co-PI on six National Science Foundation, NSF, awards. In 2007, Dr. Iriarte-Gross was awarded an NSF grant titled A Dissemination Project To Increase Girls Raised in Tennessee Science (GRITS). This project provided information for Tennessee girls, parents, teachers and guidance counselors about STEM education and careers. This grant also supported the growth of EYH Conference sites across Tennessee. Because of her work with GRITS, the National Girls Collaborative Project (NGCP) named Dr. Iriarte-Gross lead of the GRITS Collaborative Project for the state of Tennessee in 2008. In 2009, she was named director of the MTSU WISTEM Center. In July 2014, Dr. Iriarte-Gross and four other STEM faculty at MTSU, were awarded an NSF ADVANCE grant. This study, A Catalyst to ADVANCE the Participation and Advancement of Women in Academic STEM Careers at Middle Tennessee State University, focuses on identifying barriers that affect recruitment, retention, participation, and promotion of women STEM faculty at MTSU.

Dr. Iriarte-Gross is nationally known for her advocacy for encouraging girls and women in the sciences. She participates in local and national programs which support the recruitment, retention and graduation of girls and women in STEM education and careers. For this work, she was a nominee for the 2014 Presidential Award for Excellence in Science, Mathematics and Engineering Mentoring. She was named an Association for Women in Science (AWIS) Fellow in 2009, served as secretary of the AWIS Executive Board in 2011 and is currently co-President of the Tennessee Chapter of AWIS. She continues to represent AWIS on the National Champions Board of NGCP. A former Upward Bound student, she received the TRIO Achievers Award for Washington D. C. in 2010. She is an active member and councilor of the American Chemical Society (ACS) and serves on the Nashville (ACS) Local Section Women Chemists Committee. In 2014, she was named to the ACS Leadership Advisory Board in recognition of her work with girls and women in STEM and in 2016, was named an ACS Fellow.

She is an at-large member of Iota Sigma Pi and President of the MTSU Sigma Xi Chapter. In May 2014, she received the first Athena International Leadership award by Rutherford CABLE. She was named a Woman of Influence by the Nashville Business Journal in 2015. She is the faculty advisor of the MTSU Women In Science and Engineering (WISE) student organization and WISE Living and Learning (residential) Community. She was recognized by the Tennessee Science Teachers Association as the 2016 Science Educator of the Year for Higher Education. She was elected a Fellow of the American Association for the Advancement of Science in 2016, the first MTSU faculty member to receive this honor. She is the 2017 recipient of the ACS National Award (sponsored by the Dreyfus Foundation): Encouraging Women into Careers in the Chemical Sciences. She received the SERMACS 2017 P3 award on behalf of the Nashville Local Section and the MTSU WISTEM Center for their collaboration on the MTSU EYH Conference for over 20 years. In August 2018, Dr. Iriarte-Gross received the MTSU Foundation’s Career Achievement Award, the highest award for an MTSU faculty member. In May 2019, she presented the commencement address to the M.S., Ed.D., and Ph.D. graduates at MTSU. The Nashville Technology Council recognized the work and dedication of the WISTEM Center and its signature program, EYH, with the 2020 Diversity and Inclusion Initiative of the Year. In 2020, she was named Woman of Achievement-Tennessee by the Women in Higher Education-Tennessee state-wide organization. The WISTEM Center received the 2021 Inspiring Programs in STEM Award from Insight Into Diversity Magazine. The Tennessee STEM Innovation Network, named Dr. Iriarte-Gross as the 2022 recipient of the Excellence in Advocacy Award.

Dr. Iriarte-Gross is a native of Washington D. C. She lives in Murfreesboro with her husband, Charles and their one cat, Wild.

Congrats to alum Lisa Reaney on receiving the Governors Excellence in Service Award! 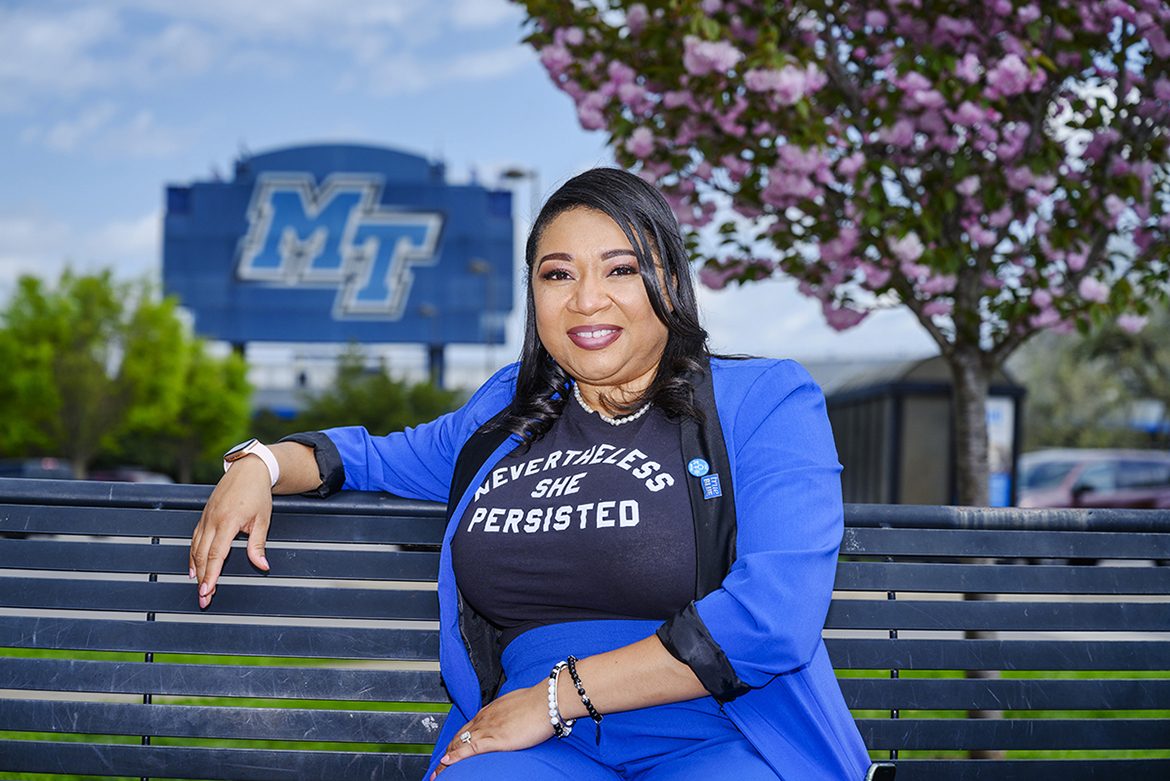 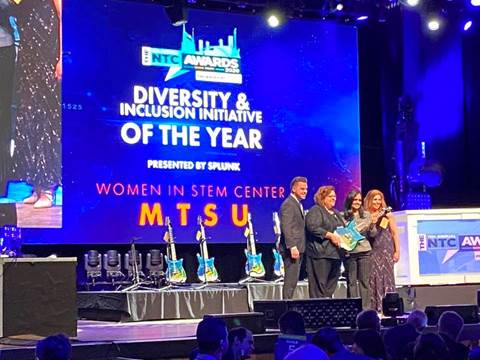 WISTEM captured the Diversity and Inclusion Initiative of the Year Award