Before September 2008, I knew that poverty existed. I had read about people in underdeveloped nations around the world living on less than $1 a day, struggling to survive. I had seen the suffering in the faces of malnourished children in Africa on late-night television commercials. And in my hometown of Chattanooga, TN, I had volunteered at an after-school program for underprivileged children, many of whom were below the American "poverty"; level. But until I landed in Dhaka, Bangladesh on September 14, 2008, to begin my 10-week internship with Grameen Bank, I did not know what true poverty was. While 'eye-opening,' 'inspiring,' and 'profound' might be used to describe my internship experience in Bangladesh, these words are drastic understatements. 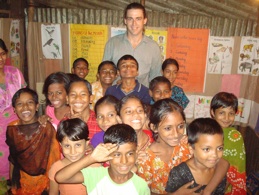 During my internship with Grameen Bank, I traveled to rural villages and witnessed how access to capital (through microcredit loans provided by Grameen) can empower impoverished people to pull themselves out of poverty through their own drive, determination, and entrepreneurial abilities. I met Grameen members (who formerly lived on less than $1) whose businesses had thrived to such an extent that they now earn in excess of $15,000 annually. While in Dhaka, I visited Grameen "slum schools"; (schools in the poorest neighborhoods in Dhaka), where I met ten-year-old children who were able to go to school for only four hours a day, so that they could work the rest of the day to provide food for themselves and their families. However, without Grameen Shikkha, the children would not have been able to attend school at all.

While I saw the successful implementation of a variety of poverty alleviation strategies in my work with Grameen, I also saw that much work must still be done to create a world without poverty. One morning on the way to Grameen Bank's head office in Dhaka, I saw an infant no older than 10 months placed on a tattered piece of blue tarp on the side of the street. Coins and bills offered by passing pedestrians surrounded the poor infant, born into begging.

My internship with Grameen Bank in Bangladesh has forever altered my life in nearly every aspect. On a personal level, I realized how blessed I am to have been born into an affluent country, and I will always be content with the relative material comfort that is the norm in America. On an academic level, I saw how the economics and finance techniques, theories, and skills I learned in the classroom at MTSU could be applied to make the world a better place. And on a professional level, I left Bangladesh imbued with the passion and determination to (paraphrasing George Eliot) "make the business of my life to help in some small way to reduce the sum of ignorance, degradation and misery on the face of this beautiful earth.";

"My greatest challenge has been to change the mindset of people. Mindsets play strange tricks on us. We see things the way our minds have instructed our eyes to see.”  - Muhammad Yunus