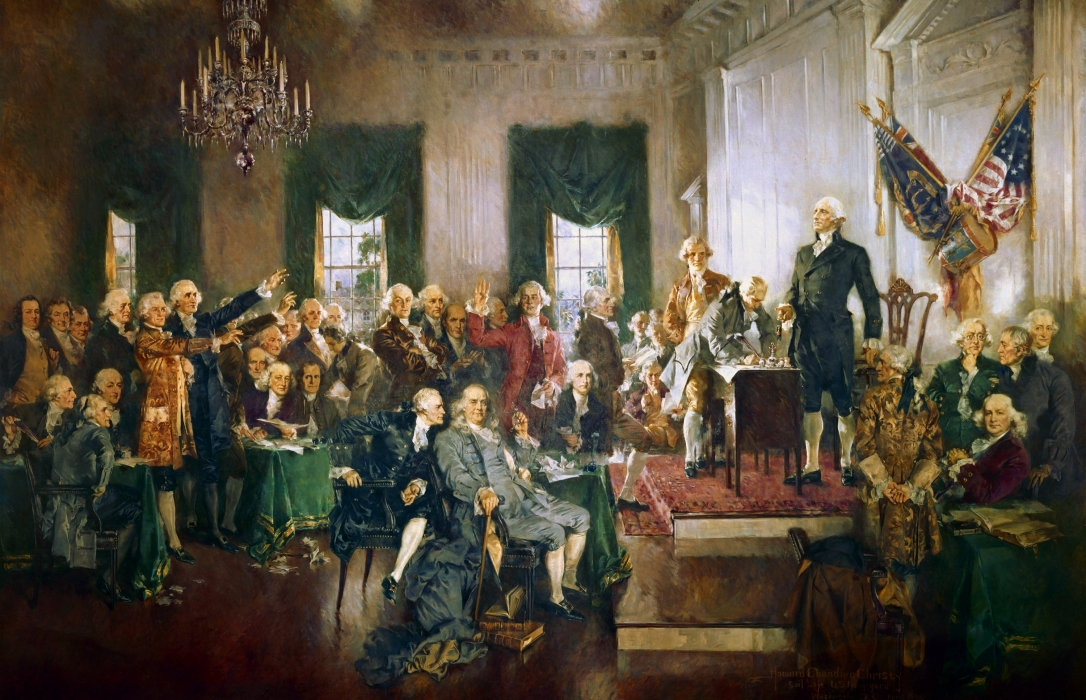 A painting of George Washington presiding over the Philadelphia Constitutional Convention of 1787. This painting, by Howard Chandler Christy, hangs in the U.S. Capitol. (Public domain)

From May to September 1787, delegates to the Constitutional Convention hammered out the U.S. Constitution in Philadelphia.

The meeting, over which George Washington presided, rested on the reasoned dialogue and compromise of 55 representatives from the 13 original states, except Rhode Island.

To encourage delegates to make arguments without fear of recrimination and to discourage mob action in the city, those in attendance kept their deliberations secret during their lifetimes and did not inform the public of the resulting document until September 17, after most of the delegates had signed on to it.

Articles of Confederation gave too much power to the states

At the time of the convention, the Articles of Confederation, under which states wielded primary power, was the nation’s governing document. Article 2 specifically recognized the sovereignty of the states, and the federal government’s powers were mostly limited to foreign affairs and did not include control of interstate commerce.

If Congress needed taxes or military forces, it could request but not coerce state compliance. Although this alliance proved adequate for winning the Revolutionary War and providing government for new territories, it made it difficult to promote domestic prosperity and for the United States to assume equal status among other nations.

Delegates from five states who met in Annapolis in September 1786 to treat problems of interstate commerce called for a broader convention the following May. Partly prodded by the threat of Shay’s rebellion — an uprising of economically depressed farmers in Massachusetts that winter — the states responded affirmatively.

New constitution provided for three branches of government, rather than one

Although many of the delegates arrived in Philadelphia expecting to revise the Articles of Confederation, some had grander ideas. With the help of James Madison, fellow delegates from Virginia offered a new plan that set the stage for a fundamental transformation of the government. It proposed three branches, rather than one, and dividing Congress into two houses, both of which would be represented according to population rather than equally as in the unicameral Congress under the Articles of Confederation.

The Virginia Plan encountered opposition in the form of the New Jersey Plan, whose proponents were less devoted to a strong national government and more concerned with maintaining states’ existing equality in Congress. In time, the Connecticut Compromise resolved this issue by allocating representation according to population in the U.S. House of Representation while retaining equal state representation in the Senate.

The convention adopted other compromises, including one that essentially left slavery in place where it existed, allowed the slave trade to continue for 20 years, and provided for representation of slaves by designating each one as three-fifths a free person. Delegates also devised the electoral college for selecting the president and adopted a much more extensive list of powers for Congress than that body held under the Articles of Confederation.

A few provisions of the Constitution addressed issues related to religion and other subjects later covered by the First Amendment.

On Aug. 20, Charles Pinckney of South Carolina introduced proposals to the Committee of Detail that included a provision for liberty of the press similar to that later found in the First Amendment, but the convention did not positively act on it.

Five days before delegates signed the Constitution, Virginia’s George Mason, who had helped author the Virginia Declaration of Rights, proposed to preface the Constitution with similar provisions. This motion failed, as did one two days later by Charles Pinckney and Elbridge Gerry of Massachusetts proposing “that the liberty of the Press should be inviolably observed” (Farrand 1966: 2:617).

Later, Connecticut’s Roger Sherman argued that no need existed for such a prohibition because “the power of Congress does not extend to the Press” (Ibid.: 618).

The Constitution created a governmental structure designed to protect rights through a separation of powers, checks and balances, federalism, and other mechanisms. Hence, in Federalist no. 84, Alexander Hamilton argues that “the Constitution is itself, in every rational sense, and to every useful purpose a Bill of Rights.”

The document also lists a number of restrictions on state and national governments, chiefly in Article 1, sections 8 and 9, where, for example, it prohibits bills of attainder (legislative punishments without benefit of trial) and ex post facto laws (retroactive criminal laws).

In the closing days of the convention, however, George Mason cited the omission of a separate bill of rights to protect the people against the new national government as one of his reasons for opposing the new document. This quickly became a rallying point for those who opposed ratification.

Federalist supporters of the Constitution initially argued against the necessity for a bill of rights because the convention had not delegated powers to the new national government to stem individual liberties.

Federalists agreed work on Bill of Rights for Constitution

Some further argued that listing specific rights might imply that rights omitted were therefore subject to governmental control. This position was undercut by the fact that the Constitution did list some governmental restrictions within its text and by arguments, supported by Thomas Jefferson, that even if such guarantees were not foolproof, they would be better than nothing.

In time, leading Federalists, including Madison, agreed to work toward a bill of rights if the Constitution were adopted, thereby helping to head off the threat of a second convention. Madison led the fight that resulted in the first ten amendments, earning him the moniker “Father of the Bill of Rights.”