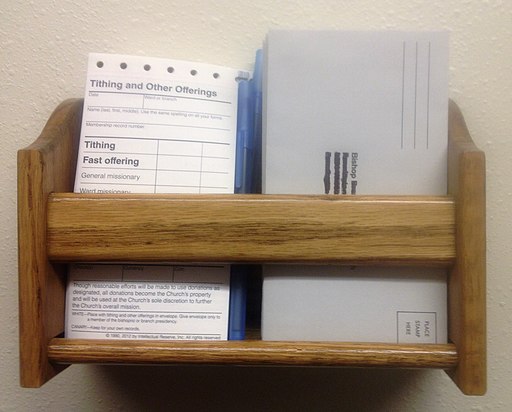 Tithes to a church, and other charitable contributions, that are made in a year before a bankruptcy filing are protected up to 15 percent of gross annual income under the Religious Liberty and Charitable Donation Protection Act. The law was passed in 1998 to ensure a person's First Amendment right to freely exercise their religious faith after some bankruptcy courts had tried to retrieve charitable contributions given to religious organizations. (Image of tithing envelopes via Wikimedia Commons, CC BY-SA 4.0)

The Religious Liberty and Charitable Donation Protection Act (RLCDPA) of 1998 clarified the degree to which an individual can contribute to charities in the year prior to filing for bankruptcy.

The law was intended in part to ensure individuals’ right to freely exercise their religious faith by giving to their church free from excessive governmental interference.

In a number of legal cases, lower courts had questioned such expenditures — often regarded by contributors as tithes and therefore essential to the exercise of their religious faith — and in a few cases had tried to retrieve charitable contributions that had been given to religious organizations. Even after the adoption of the Religious Freedom Restoration Act of 1993, it was not always clear how compelling the interests of contributors were in such cases.

The law allows such contributions up to 15 percent of gross annual income in cases in which there has been no attempt to defraud creditors and donations are consistent with prior practice.

The law achieves a degree of neutrality by applying not simply to contributions to religious entities but to all charitable organizations. Debate continues as to whether the contributions of up to 15 percent are automatically exempt or whether they are also subject to judicial investigation of their “reasonableness.”