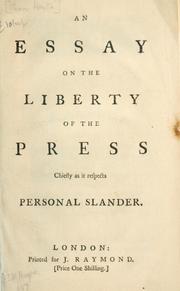 Born in Williamsburg, Virginia, George Hay (1765–1830) was a lawyer, a writer, and a federal district judge. He made important contributions to First Amendment theory by writing two pamphlets defending the freedom of the press.

Under the pen name Hortensisus, Hay published An Essay on the Liberty of the Press in the Aurora before issuing it as a pamphlet in 1799. This essay defended James Thomson Callender, a fellow Democratic Republican, against attempts to prosecute him under the Sedition Act of 1798 for publishing criticisms of President John Adams.

Hay argues Congress has no power over the press

Prefacing the pamphlet with an open letter to the President, Hay attempted to show that Congress had absolutely no power over the press and that the Sedition Act was therefore unconstitutional. He argued that Congress could exercise only those powers that the Constitution explicitly granted or that were clearly implied from such powers. In the Callender case the First Amendment denied such power, and the Tenth Amendment further confirmed such denial. In seeking a “fair construction” of the Constitution, Hay denied that constitutional provisions intended to grant this power to Congress.

Hay feared that a construction allowing Congress to regulate the press would permit it to regulate almost anything. Like his contemporary, Tunis Wortman, Hay further denied that the press could legitimately be regulated by back-door methods involving the common law. In his view the press was as free as it was in the state of nature — the right was “an absolute freedom” not a “qualified or abridged freedom.” The freedom of the press should be as unlimited as the freedom of speech and of religion. Hay’s position concerning freedom of the press apparently left open the possibility of civil suits for libel.

Hay argues for securities for libellers

By 1803, an ungrateful Callender had turned against both Hay and President Thomas Jefferson (who, as vice president, had been implicated in the Callender case). Hay wrote a second pamphlet, An Essay on the Liberty of the Press Shewing That the Requisition of Security for Good Behaviour from Libellers, is Perfectly Compatible with the Constitution and Laws of Virginia, that was published in Richmond in 1803. In this pamphlet, Hay argued that the state should be able to require writers, including Callender, who had libeled private individuals to pay a sum of money as a security to ensure future good behavior.

He articulated a position that is similar to that of the Supreme Court in New York Times Co. v. Sullivan (1964), in which the Court made a distinction between discussion of public affairs and the libel of private individuals. Hay argued that the power to require security from people accused of libel must not be abused: “The government is not permitted to abridge, but it may certainly enlarge the freedom of the press.”