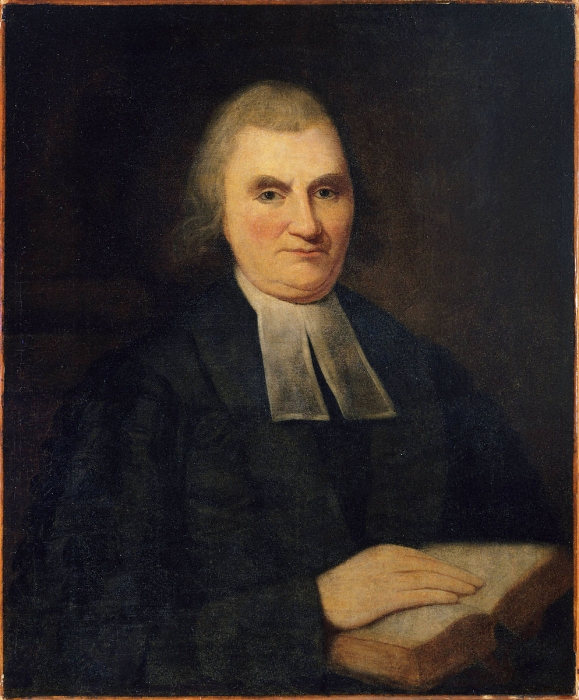 John Witherspoon, an early convert to the Patriot cause, was president of the College of New Jersey (today's Princeton University) and the only clergyman to sign the Declaration of Independence. The British considered his college to be a "seminary of sedition." (Painting by Charles Willson Peale, public domain via Wikimedia Commons)

John Witherspoon (1723–1794) was the only clergyman to sign the Declaration of Independence and the Articles of Confederation as well as serve at the convention that ratified the U.S. Constitution in New Jersey. He likely also would have been selected to the Constitutional Convention had he not been meeting simultaneously in Philadelphia to draw up a constitution for his own denomination, which paralleled the national document in a number of key respects.

Witherspoon was president of Princeton University

Born in Scotland and educated at the University of Edinburgh, Witherspoon was well known for his publications in Scotland before he was invited to be president of the College of New Jersey (today’s Princeton University), where he succeeded Jonathan Edwards and served from 1768 until 1794. As president of Princeton, Witherspoon educated five delegates to the U.S. Constitutional Convention of 1787, including Virginia’s James Madison, as well as scores of individuals who served as judges and justices, members of Congress, and members of state ratifying conventions.

Witherspoon was an early convert to the Patriot cause, and the British considered his college to be a “seminary of sedition” (Morrison 2005: 13). He brought many of the better elements of the Scottish Enlightenment to Princeton and was interested in science as well as in government, moral philosophy, religion, and other subjects; notes of his lectures, which stressed the “moral sense,” were widely distributed in early America. His philosophy was relatively pragmatic and blended well with the classical liberal strains of political thought advocated in his day.

Witherspoon was an active member of the Continental Congress

One of the most active members of the Continental Congress, Witherspoon advocated independence, served on a large number of committees, and authored a number of Resolutions of Prayer and Thanksgiving. Some believe that he may have been responsible for adding the words “with a firm reliance on the protection of divine Providence” to the Declaration of Independence.

Witherspoon was worked to ensure there was no nationally established church

Herbert Foster has identified “five points of political Calvinism” that appear to apply to Witherspoon: “fundamental law, natural rights, contract and consent of people, popular sovereignty, resistance to tyranny through responsible representatives” (Quoted in Morrison 2005: 81). Consistent with his Presbyterian theology, Witherspoon believed that God was the author of freedom, and he did not think that the state, which was administered by imperfect individuals, had the right to dictate personal religious beliefs.

Unlike some English advocates of religious freedom, Witherspoon was willing to extend such freedom to Roman Catholics, and he believed that the state could encourage good behavior and that religious virtue led to political strength. The Presbyterian Constitution of 1787 to which Witherspoon contributed removed provisions from the earlier Westminster Confession that allowed magistrates to suppress blasphemies and heresies, and the U.S. Constitution denied the power of the state to intervene in matters of religious faith (Morrison, 2005: 108).

Witherspoon worked with fellow Presbyterians and Congregationalists to ensure that the Anglican Church did not become the “established church” of the new nation as it had been in some of the states, but he believed that members of the clergy had the same right to participate in politics as others did. Morrison observed that Witherspoon responded to a provision in the Georgia State Constitution that prohibited clergymen from serving in the state legislature with a satirical essay in 1789 that suggested that the state might prefer individuals who had been defrocked for a “disposition for cursing and swearing, drunkenness or uncleanness” (quoted in Morrison 2004: 123).