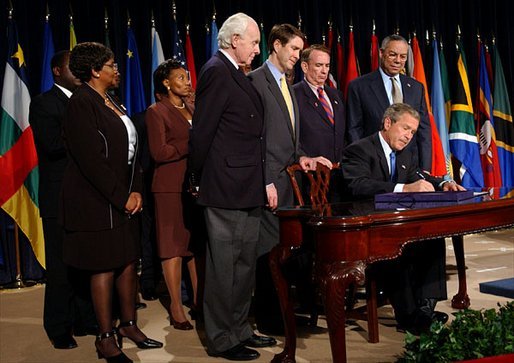 President George W. Bush signs the United States Leadership Against HIV/AIDS, Tuberculosis, and Malaria Act of 2003 on May 27, 2003. The legislation commited $15 billion to fight AIDS abroad, but its provisions requiring recipients of the grant money to explicitly oppose prostitution or sex trafficking were found to be an unconstitutional infringement on free speech under the First Amendment. (White House photo by Tina Hager, public domain)

Chief Justice John G. Roberts Jr. delivered the majority opinion for six justices in the case of Agency for International Development v. Alliance for Open Society, 570 U.S. ____ (2013).  The case arose under the United States Leadership Against HIV/AIDS, Tuberculosis, and Malaria Act of 2003.

Through this law Congress authorized appropriations to nongovernmental organizations to assist its efforts but required two conditions. The first prevented the use of any funds “to promote or advocate the legalization or practice of prostitution or sex trafficking.” The second, known as the Policy Requirement, extended this prohibition to prevent aid to any organization that does not explicitly oppose these practices.

Both a federal district court and the Second U.S. Circuit Court of Appeals agreed that the Policy Requirement violated First Amendment rights, and the U.S. Supreme Court agreed.

Congress adopted this law in reaction to widespread deaths caused by HIV and related diseases, both of which it thought were furthered by prostitution and sex trafficking. The organizations challenging the law were engaged in combatting the disease but found that they sometimes had to work with prostitutes and did not want to censor discussions at conferences and other forums about how to combat HIV/AIDS.

Roberts observed that the decision in Rumsfeld v. Forum for Academic and Institutional Rights, Inc. (2006) had established that “freedom of speech prohibits the government from telling people what they must say.” The Spending Clause grants Congress broad powers to tax and spend on behalf of the “general welfare,” and includes “the authority to impose limits on the use of such funds to ensure they are used in the manner Congress intends.” When organizations do not agree with these conditions, they can decline accepting the funds. By the same token, the Court has established that government “may not deny a benefit to a person on a basis that infringes his constitutionally protected . . . freedom of speech even if he has no entitlement to that benefit.”

Acknowledging that the line between the two areas is far from clear, Roberts said that the relevant distinction “is between conditions that define the limits of the government spending program — those that specify the activities Congress wants to subsidize — and conditions that seek to leverage funding to regulate speech outside the contours of the program itself.”

Thus, Regan v. Taxation with Representation of Washington (1983) upheld a requirement preventing tax-exempt status from attempting to influence legislation while FCC v. League of Women Voters of California (1984) struck down a requirement preventing noncommercial radio and television stations that accepted aid from editorializing. Rust v. Sullivan (1994) further allowed the government to restrict funds to groups that agreed not to counsel abortion as part of family planning, but ruled that government could not limit the groups’ other programs. Roberts characterized this distinction as one “between conditions that define the federal program and those that reach outside it.”

In this case, the Policy Requirements at issue were an attempt at “compelling a grant recipient to adopt a particular belief as a condition of funding.” Roberts believed such organizations should be able to express whatever beliefs it chooses as long as it does so through affiliates that do not spend governmental funds.

Roberts further thought that the government had failed to establish that organizations might use federal funds to achieve one objective to free up funds to promote prostitution or sex trafficking.

Justice Antonin Scalia wrote a dissenting opinion joined by Justice Clarence Thomas. Scalia wrote that the Policy Requirement represented “nothing more than a means of selecting suitable agents to implement the Government’s chosen strategy to eradicate HIV/AIDS,” which was “perfectly permissible under the Constitution.”

He further observed that “The First Amendment does not mandate a viewpoint-neutral government,” and, much as in his opinions related to public events in religious settings, denied that “every disadvantage is a coercion.” Scalia criticized the inside/outside distinction of the majority decision as being too amorphous and argued that because “money is fungible,” organizations might use governmental money to one end and devote saved resources to another. Organizations choosing not to accept governmental aid remained unconstrained.

Scalia said that “the elephant in the room” is “that the Government is not forcing anyone to say anything.” Scalia observed that while American citizens were free to support organizations of their choice, the Framers saw the wisdom of requiring members of the government to take an oath affirming the U.S. Constitution and its values.