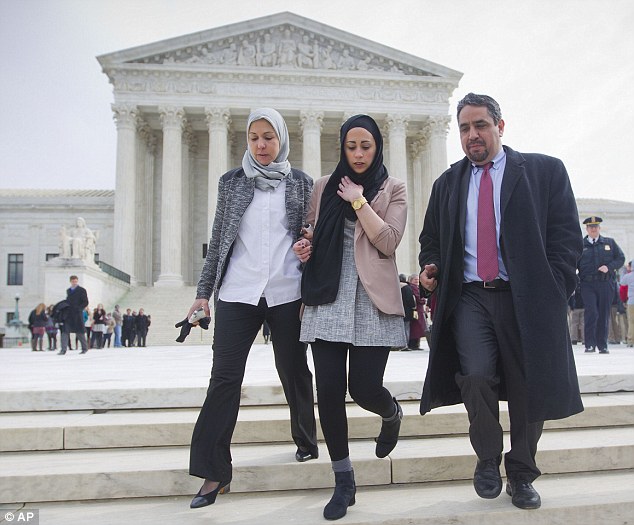 Samantha Elauf, center, her mother Majda Elauf, left, and P. David Lopez, General Counsel of the US Equal Employment Opportunity Commission (EEOC), leave the Supreme Court in 2015. Samantha Elauf and the EEOC were suing Abercrombie & Fitch, who had decided not to hire Elauf due to their dress policy. The Court ruled in favor of Elauf. (AP Photo/Pablo Martinez Monsivais, used with permission from the Associated Press)

In Equal Employment Opportunity Commission v. Abercrombie & Fitch Stores, Inc., 575 U.S. ____ (2015), the U.S. Supreme Court ruled that an employer could be liable under Title VII of the Civil Rights Act of 1964 for refusing to hire an applicant in order to avoid accommodating a religious practice, even though the potential employee had not informed the employer that she wore a headscarf because of her Muslim faith.

Samantha Elauf had applied for a position at Abercrombie & Fitch, which had a "look policy" prohibiting “caps,” and which decided not to hire her without confirming whether she was wearing her scarf for religious reasons. The Equal Opportunity Employment Commission (EEOC) filed suit on Elauf’s behalf. The district court agreed with the EEOC, but the 10th U.S. Circuit Court of Appeals issued summary judgment based on the premise that a firm could be liable for failing to accommodate a religious practice only when it had actual knowledge of the need for such an accommodation.

Justice Antonin Scalia wrote the opinion for seven members of the Court, which largely involved interpretation of Title VII. He noted that the law had provisions relating to “intentional discrimination” on the basis of religion as well as to a “disparate impact” because of this religion.

Scalia observed that the text of the law “does not impose a knowledge requirement.” He further noted that the law was designed to prohibit discrimination based on discriminatory motives, regardless of the employer’s knowledge. The law was designed to ensure that “[a]n employer may not make an applicant’s religious practice, confirmed or otherwise, a factor in employment decisions.” He observed that an employer would thus violate the law if it refused a job to an individual that it believed to be an Orthodox Jew, who would be unable to work on Saturdays.

Scalia further rejected Abercrombie & Fitch’s argument that Elauf had to raise her claim under the disparate-impact theory of discrimination rather than disparate treatment. He observed that “Title VII does not demand mere neutrality with regard to religious practices — that they be treated no worse than other practices. Rather, it gives them favored treatment, affirmatively obligating employers not ‘to fail or refuse to hire or discharge any individual . . . because of such individual’s ‘religious observance and practice.’ ”

Justice Samuel Alito wrote a concurring opinion because he believed the record was adequate to establish “that Abercrombie’s decision makers knew that Elauf was a Muslim and that she wore the headscarf for a religious reason,” and that this was sufficient to overturn the 10th Circuit’s summary judgment. Alito did not, however, think that the law intended to penalize employers without knowledge that they were discriminating on the basis of religion.

Justice Clarence Thomas agreed that the only two causes of action in such cases were disparate treatment or disparate impact, but otherwise dissented because he thought that Abercrombie & Fitch’s application of its "look policy" had been neutral and was thus not intentionally directed against religious practice.

Thomas did not think that the disparate impact of the store’s otherwise neutral policy constituted intentional discrimination or motive.

Thomas believed that history showed that “cases arising out of the application of a neutral policy absent religious accommodations have traditionally been understood to involve only disparate-impact liability.”