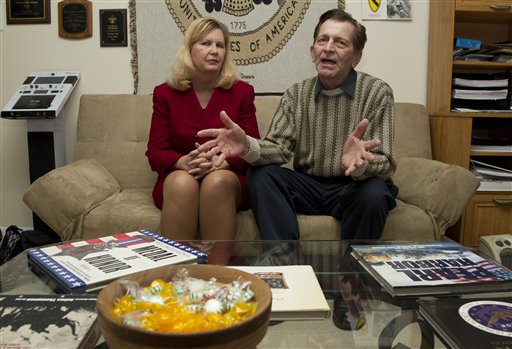 Pam Stener, pictured here with her husband Doug,  is the author of a college paper that led to the drafting of the Stolen Valor Act, aimed at curbing false claims of military valor. Doug exposes phony medal winners. The Supreme Court struck down the Stolen Valor Act, refusing to expand the limited number of categories where restrictions are permitted on the content of speech. False speech is not automatically unprotected by the First Amendment.  (AP Photo/Carolyn Kaster, used with permission from the Associated Press)

Because the First Amendment is designed to further the pursuit of truth, it may not protect individuals who engage in slander or libel, especially those who display actual malice by knowingly publishing false information or publishing information “with reckless disregard for the truth.”

Government does not stand as definer of truth

As a general rule, however, the government does not stand as the definer of truth, which is designed to emerge from the clash of opinions rather than from government fiat. Legally, it is difficult to identify a false opinion, although courts are consistently called upon to weigh factual evidence in both civil and criminal cases.

In United States v. Alvarez, 567 U.S. ____ (2012), the Supreme Court struck down the Stolen Valor Act, which was designed to punish individuals who made false claims, not about others, but about their own military service. In striking down the law, the Supreme Court thus refused to expand the limited number of categories, like obscenity, true threats, and libel, where it permitted restrictions on the actual content of speech. Essentially, the justices thought that this was an issue that should be resolved in free and open debate rather than by government action.

The Court has taken similar positions with regard to statements made by political candidates who are running for office.

The more recent buzzword for false speech is fake news. The term, which often mixes criticism not simply of facts but also of their interpretation, further illumines the difficulty of allowing government (which the media seek to guard) to arbitrate rival claims to truth.

Those who view the public realm as a marketplace of ideas are ultimately expressing confidence that over time the American people will be able to sort out truth from falsehood.