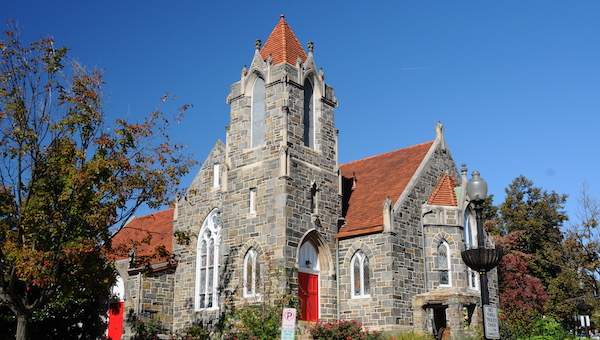 The Georgetown Lutheran Church is the oldest Lutheran congregation in Washington, D.C., according to a history of the church. A decision by the U.S. Supreme Court in Beatty v. Kurtz (1853) by Justice Joseph Story allowed the church to retain the property after Charles Beatty's death based on Maryland state law. The case is an example of government involvement in property rights relative to religion despite the establishment clause of the First Amendment. (Photo via church's website)

One such case that made it to the U.S. Supreme Court involved land that one Charles A. Beatty had laid out in Georgetown, Maryland, for the use and benefit of the German Lutheran Church.

Evidence suggested that although no formal deed had ever been signed, Beatty had clearly expressed his wishes that the land belonged to the church. Moreover, German Lutherans had built a school (which sometimes served as a church and was at one time outfitted with a steeple and bell) on the property, which had included a graveyard, and that had been exempted from taxation.

According to the suit, which was filed after Beatty’s death, by Daniel Kurtz and others who were acting as trustees for the church, John T. Richie had disputed the church’s ownership and had entered the property and even begun to remove some of the tombstones.

The decision in Beatty v. Kurtz was written by Justice Joseph Story, who is known for arguing that U.S. common law incorporated Christianity. In the case at hand, he observed that because the German Lutheran Church in Georgetown had never been officially incorporated, it had special problems in accepting title to the property.

Story thus noted that “If the appropriation, therefore, is to be deemed valid at all, it must be upon other principles than those which ordinarily apply between grantor and grantee” (p. 583). He decided however that such a foundation could be “supported as a dedication of the lot to public and pious uses” (p. 583). This principle was, in turn, grounded in a provision within the bill of rights of Maryland, which “gives validity to any sale, gift, lease or devise of any quantity of land, not exceeding two acres, for a church, meeting or other house of worship, and for a burying ground, which shall be improved, enjoyed or used only for such purposes.”

Story further tied this principle to “the doctrines of the statute of Elizabeth for charitable uses, under which it is well known, that such leases would be upheld, although there were no specific grantee or trustee” and to the case of Town of Pawlet vs. Clarke, 9 Cranch 292, which “this Court considered cases of an appropriation or dedication of property to particular or religious uses, as an exception to the general rule requiring a particular grantee; and like the dedication of a highway to the public” (p. 583).

Story also accepted the competency of the trustees as member of a voluntary society to file the suit on behalf of the German Lutheran congregation.

Other states did not have have same laws

In an interesting contrast that demonstrates how laws sometimes varied from state to state, in Kain v. Gibboney (1879), Justice William Strong denied the validity of a bequest to a Roman Catholic Bishop by one Eliza Matthews (who had been a member of the “Sisters of St. Joseph”) on the basis that the state had repealed all English statutes, included the statute of Elizabeth, that Story had cited in the Beatty case.

In such circumstances, Strong said that the will appeared to be less “a gift for charitable uses” than “a private bounty” (p. 365).