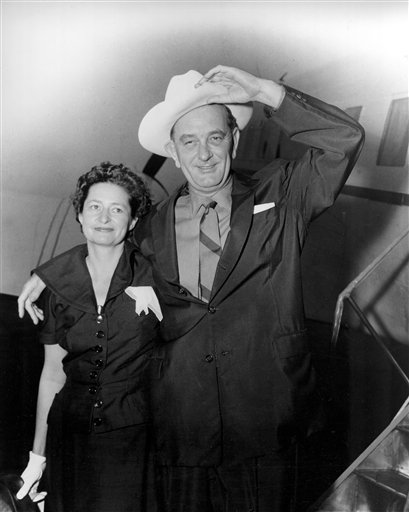 The Johnson Amendment requires churches to refrain from participating in political campaigns if they want to keep their tax-exempt status. The amendment was introduced by Lyndon B. Johnson while he was a U.S. senator. Churches, however, may safely engage in voter registration drives, educational activities, and even political forums that do not explicitly endorse one or another candidate. President Donald Trump has said he would like to eliminate the IRS rule and some churches complain it restricts their religious expression. However, the rule remains in place. (Photo of then Sen. Lyndon B. Johnson of Texas with his wife, at a Washington, D.C. airport on Aug. 25, 1955. Photo used with permission from The Associated Press.)

The Johnson Amendment is an addition, adopted in 1954, to the Internal Revenue Code, 501(c)(3).  As a condition for maintaining exception from income taxes and other taxes, charitable organizations including churches and affiliated groups, were forbidden from participating or intervening in “any political campaign on behalf of (or in opposition to) any candidate for public office” (Davidson 1998, 17).

The amendment is named after then Senator (later President) Lyndon B. Johnson, who introduced the amendment out of concern about the Facts Forum and the Committee for Constitutional Government.  Both were tax-exempt organizations that had imitated the tactics of Senator Joseph R. McCarthy (R., WI) in campaigning against politicians like Johnson who were more liberal in their political orientations.

When President Donald J. Trump was elected president, he announced his intention to repeal this amendment, which some of his supporters claimed was restricting their religious expression.  He subsequently signed an executive order tweaking its enforcement (Matzko 2010, 48).

It should be noted, however, that religious organizations are free to spend money on related 501(c)(4) advocacy organizations, to which contributions are not tax exempt.  Moreover, the Internal Revenue Service had issued guidelines that permit churches to engage in voter registration drives, educational activities, and even political forums that do not explicitly endorse one or another candidate.

There are so many churches and related organizations that the government has rarely enforced the regulations very rigorously.

The government did withdraw the tax exempt status of the Church at Pierce Creek in Vestal, New York after it ran a full-page advertisement against the election of Bill Clinton in 1992, a decision that was upheld in both a U.S. District and in the D.C. Appellate Courts [Branch Ministries v. Rosotti, 211 F.3d 137, 341 U.S.App.D.C. 166 (2000)] affirming Branch Ministries v. Rossotti, 40 F. Supp.2d 15 (D.D.C. 1999).  Moreover, although it ultimately lost, the IRS significantly impacted the radio ministry of anti-communist evangelist Billy James Hargis and his Christian Crusade when in 1964 it revoked his tax exemption (Matzko 2020, 47).

A primary concern of those who support enforcement of the current rule is that lifting the exemption on 501(3)(c) endorsements would increase so called “dark money” by allowing individuals to use such organizations to obtain tax exemptions that are not available for other campaign contributions (Balmer 2018; Untiedt 2019).

Perhaps in responses to cases where President Clinton visited Baltimore’s New Psalmist Baptist Church in 1998 and urged congregants to vote for more Democrats or where he appeared that same year with Senator Chuck Schumer in Saint Sebastian’s Church Parish Center in New York City as part of a campaign stop, (Hawkins 2008, 193), the Internal Revenue Service has sought to educate churches on what the law requires and to increase the transparency of its regulations (Hawkins 2008, 194-198).

John Vile is a professor of political science and dean of the Honors College at Middle Tennessee State University. He is co-editor of the Encyclopedia of the First Amendment. This article was published Jan. 10, 2020.