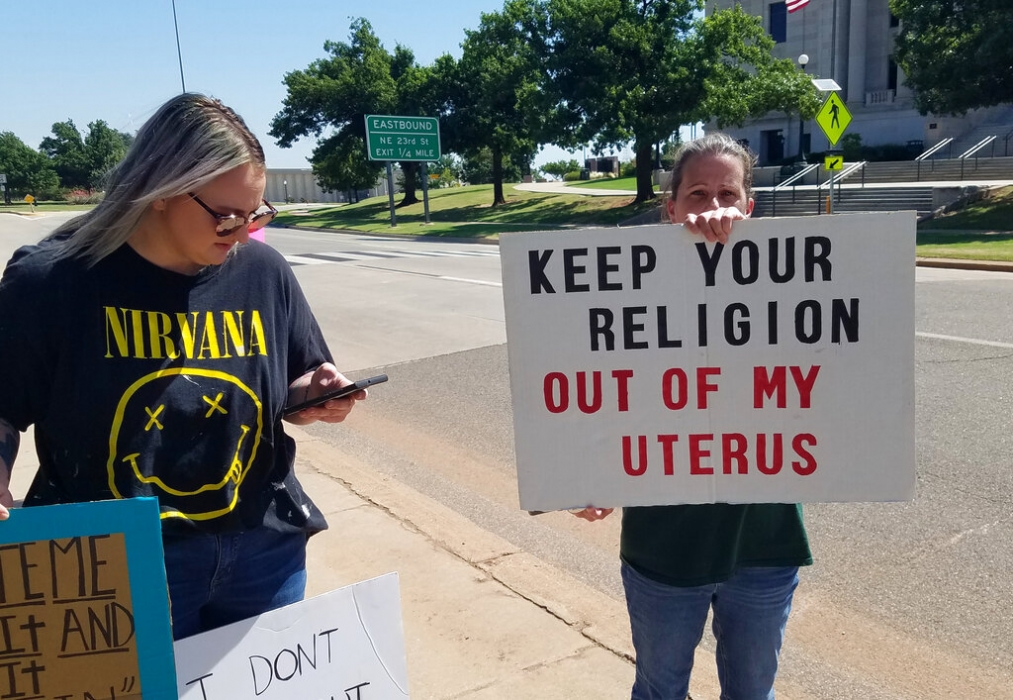 Abortion rights supporters Marie Adams and Kaycee Tetreault protest Saturday, June 25, 2022 outside the Oklahoma state Capitol a day after the Supreme Court overturned a woman’s constitutional right to an abortion. The rights to privacy and First Amendment freedoms of religion and from state-supported religion have been raised as constitutional protections for a woman's right to have an abortion. (AP Photo/Ken Miller)

The 2022 Supreme Court decision in Dobbs v. Jackson’s Women’s Health Organization overturned Roe v. Wade (1973) and its progeny and declared that the court no longer considered abortion to be a constitutional right as part of an individual's right to privacy from government interference.

Justice Samuel Alito’s opinion for the majority argued that the 14th Amendment, which safeguards rights of life, liberty and property from government actions, did not eliminate anti-abortion laws in existence when it was ratified in 1868. Alito’s opinion also said that there had not been a long history of the amendment having such an effect prior to Roe, thus undermining arguments that such a right might be legitimated through the idea of substantive due process.

Judges and scholars are still debating the implications of the Dobbs decision on other areas of privacy rights such as birth control, consensual same-sex relations, interracial marriage (which might be protected under the equal protection clause of the 14th Amendment) and same-sex marriage. Although Alito suggested that the interests posed by fetuses made abortion unique, in a concurring opinion in Dobbs, Justice Clarence Thomas expressed willingness to reexamine these issues.

Right of privacy from government intrusion emanates from Bill of Rights

One fascinating set of arguments for limiting state powers over abortion centers on the First Amendment. Notably, in fashioning a right to privacy of married couples to use birth control in Griswold v. Connecticut (1965), which had been a primary support for the decision in Roe v. Wade, Justice William O. Douglas has relied on “penumbras [shadows] formed by emanations” from specific provisions within the First, Third, Fourth, Fifth, Ninth, and 14th Amendments.

He specifically noted that prior judicial decisions interpreting the First Amendment provision related to freedom of peaceable assembly had protected a concomitant unenumerated right to association.

More recent pro-choice arguments based on the First Amendment focus on the free exercise and establishment clauses. The arguments are not completely new, having been advanced in part by Justice John Paul Stevens in Thornburg v. American College of Obstetricians and Gynecologists (1986), Webster v. Reproductive Health Services (1989), and Planned Parenthood of Southeastern Pennsylvania v. Casey (1992).

Stevens’ primary argument was that because abortion laws rested on what he believed to be a theologically based belief that fetuses were human at conception, such laws constituted an unlawful establishment of religion. Others have argued that anti-abortion laws were part of an effort to enforce certain theologically based views of gender norms, typically attributed to the religious right.

"Justice White is also surely wrong in suggesting that the governmental interest in protecting fetal life is equally compelling during the entire period from the moment of conception until the moment of birth.  Again, I recognize that a powerful theological argument can be made for that position, but I believe our jurisdiction is limited to the evaluation of secular state interests." — Justice Stevens in concurring opinion in Thornburg.

Some argue that their religion permits them to have abortions

More recent arguments, which have been filed by some religiously liberal Jewish groups and supported by some Unitarian/Universalists and others challenging anti-abortion laws, argue that they violate the free exercise clause because they interfere with the rights of those whose faith allows them to have abortions.

Many laws, including those that prohibit murder theft, and de jure racial discrimination, coincide with religious views without being considered to be establishing religion. Moreover, in upholding laws against polygamy in Reynolds v. United States (1879), the Supreme Court made it clear that the right to the free exercise of religion was not, like the right to one’s religious beliefs, absolute.

An amicus curiae brief filed by the Jewish Coalition for Religious Liberty in the Dobbs Case opposing free exercise claims against anti-abortion laws observed that such claims are generally invoked in cases that “prohibit government entities from targeting religious activity, require state actors to treat religious conduct as favorably as comparable secular conduct, or prevent the government from substantially burdening religious activity unless doing so is necessary to further a compelling government interest.” By these standards, which have become fairly common in the aftermath of the Supreme Court’s decision in Employment Division, Department of Human Resources of Oregon v. Smith (1990), current state laws against abortion do not implicate free exercise issues.

For better or worse, in Dobbs, the Supreme Court majority toppled cases since Roe on the basis that they were not adequately rooted in history.  In such circumstances, it seems unlikely that it would now formulate another novel view of the First Amendment, which to the author’s knowledge has never been the basis for a majority Supreme Court decision, to accomplish the same object.

Again, to the author’s knowledge, although certain religions permit abortions in certain circumstances, there are no religions than mandate that women have abortions. As judicial approaches to laws against polygamy demonstrate, even were they to do so, First Amendment protections for the rights of religious belief and religious advocacy are unlikely to provide legal support for abortion as a religious practice.

This article was published on July 21, 2022. John Vile is a professor of political science and dean of the Honors College at Middle Tennessee State University. He is co-editor of the Encyclopedia of the First Amendment.