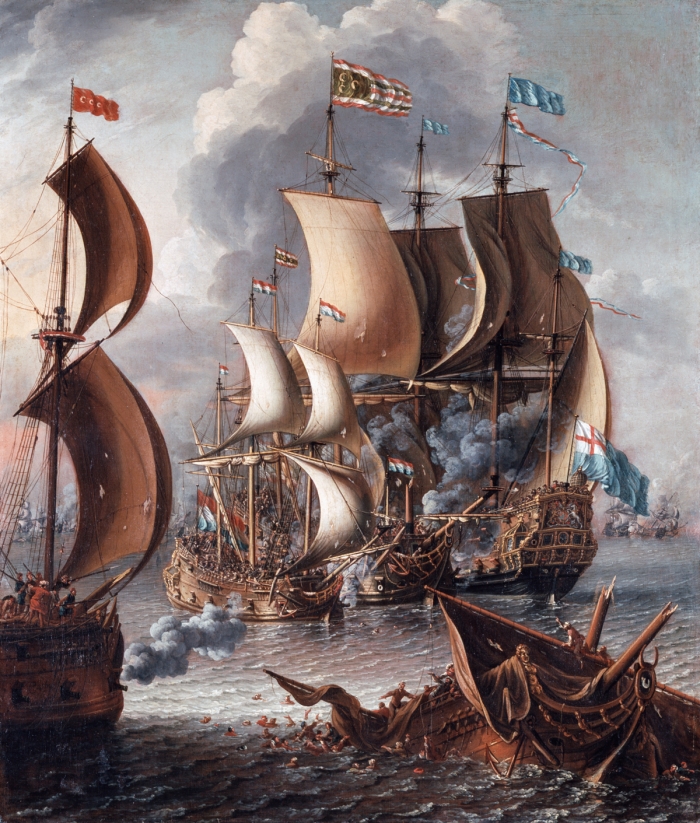 The 1797 Treaty of Tripoli that sought to secure America from attacks by the so-called Barbary pirates who were Muslim made a point to say that the United States "is not in any sense founded on the Christian Religion." (Source: Painting by Lorenzo A. Castro entitled "A Sea Fight with Barbary Corsairs." Public domain)

The U.S. Constitution does not mention God, the first clause of the First Amendment forbids Congress from adopting any laws tending to the “establishment of religion,” and 19th century efforts to adopt an amendment specifically acknowledging God failed.  However, some contemporary politicians have argued that the United States is a “Christian nation.” Although some are simply highlighting the fact that a majority of Americans identify with a Christian denomination, others use the "Christian nation” belief to encourage legislation to enforce what they perceive to be Christian religious beliefs.

One document that is sometimes used to counter this argument is a treaty that representatives of the United States entered into with Tripoli in 1796. The Senate ratified the treaty and John Adams signed it the next year. The treaty was an unsuccessful attempt (the U.S. went to war over this issue during the Jefferson Administration) to prevent the so-called Barbary pirates — Muslim pirates and privateers who operated from North Africa — from interfering with American trade, which, flying under the U.S. flag, was no longer covered by treaties as it had been when such vessels were flying under British flags.

Treaty assures U.S. is not founded on Christian religion

Article 11 of the treaty stated: “As the government of the United States of America is not in any sense founded on the Christian Religion, as it has in itself no character of enmity against the laws, religious or tranquility of Musselmen, and as the said States never have entered into any war or act of hostility against any Mehomitan nation, it is declared by the parties that no pretext arising from religious opinions shall ever produce an interruption of the harmony existing between the two countries.”

The provision, which may have been written by Joel Barlow (one of the American negotiators), but which is missing from its Arabic counterpart, was not repeated in other treaties with other powers in the region, and the treaty itself was superseded by another treaty in 1805 (Crane 2020, 404-405).

The treaty received little contemporary comment. American Jews later used the treaty provision to oppose antisemitic discrimination; strict church-state separationists have cited the provision to counter the view that the U.S. is a Christian nation, and others have interpreted it merely as a way of reassuring Muslim states that the U.S. would not use the Christian religion as a pretext for conflict.

This article was published July 25, 2022. John Vile is professor of political science and dean of the Honors College at Middle Tennessee State University. He is co-editor of the Encyclopedia of the First Amendment.