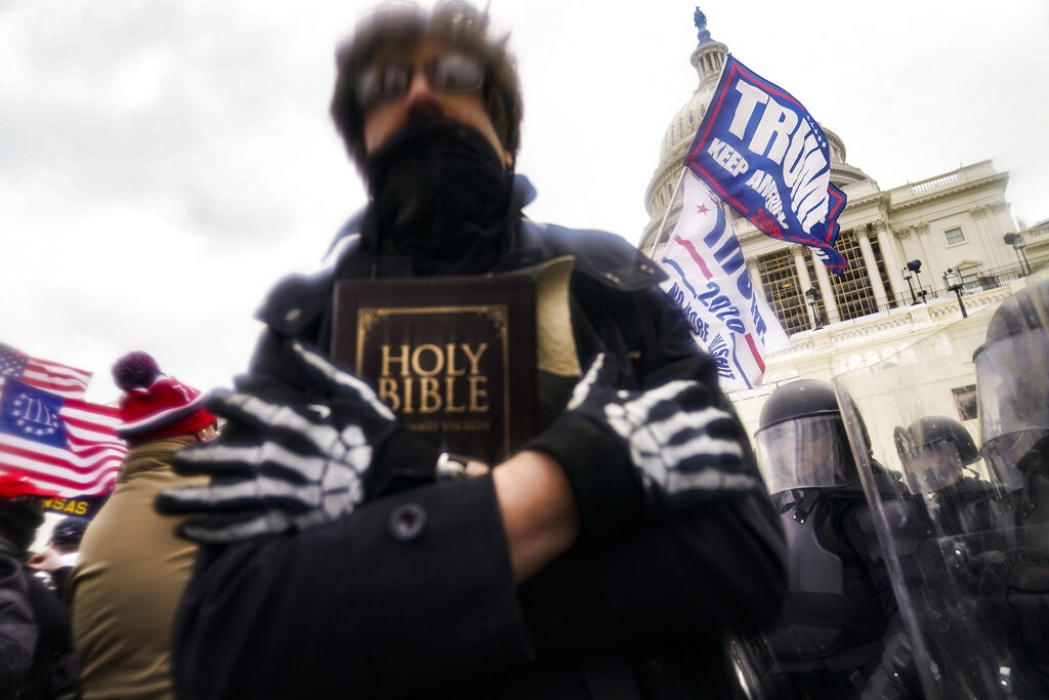 One professor has outlined six types of Christian nationalism that have played important roles in U.S. history and argues that Christians have a meaningful role to play in enhancing democratic values. Others have observed an emergence of a more militant and threatening faction of Christian nationalism, citing the Jan. 6., 2021, storming of the U.S. Capitol in which many participants carried Christian signs or symbols as they sought to stop the certification of the presidential election. In this Wednesday, Jan. 6, 2021, file photo, a man holds a Bible as Donald Trump supporters gather outside the Capitol in Washington to try to stop Joe Biden from becoming president.  (AP Photo/John Minchillo)

The framers of the U.S. Constitution chose not to mention God directly within the document. The First Amendment to the U.S. Constitution subsequently prohibited Congress from establishing religion while guaranteeing its free exercise. Proposals to amend the constitution to declare the United States to be a Christian nation have failed, although the Constitution of the Confederate States of America did include a reference to “the favor and guidance of Almighty God.”

None of these facts has prevented public leaders from referencing God in their speeches and proclamations or Congress from adopting “In God We Trust” as the national motto and adding the words “under God” to the pledge to the U.S. flag.

An increasing number of individuals are identifying themselves with Christian nationalism, and an increasing number of books and articles have been written on the subject. One difficulty is that Christian nationalism has a variety of meanings. To some, it is an attempt to integrate principles of justice that Christianity shares with other religions into fundamental law. Throughout U.S. history, activists from a variety of Christian denominations, often joined by Jewish and other counterparts, have worked to abolish slavery, secure women’s right to the vote and advance the rights of African Americans and other minorities, and taken positions for and against American foreign policy initiatives.

The first, which he calls Puritan Millennialism, posited that the people who settled America had a covenant with God. This strain rejected “the traditional amillennialism (belief that biblical references to the millennium were figurative rather than literal) for a progressive post-millennialism,” which foresaw developments in America as preparing the way for, and even hastening, Christ’s return.

During the American Revolution, Christian Republicanism prevailed, Wilsey says. As colonists battled against what they perceived to be British tyranny, Patriot pastors likened the plight to that of the ancient Israelites in Egypt and assured fellow countrymen of God’s help.

In the 19th century, journalist John L. O’Sullivan further developed the idea of “manifest destiny,” another strain of Christian nationalism. It emphasized that U.S. citizens were fulfilling God’s plan by expanding across the prairies and to the West Coast, a belief that justified the displacement of Native Americans, the war against Mexico and American acquisition of colonies after the Spanish-American War.

Abraham Lincoln suffused his speeches with biblical language in support of preserving the Union. He interpreted the Civil War not as God’s vindication of the North over the South, but as God’s judgment on the nation as a whole for the sin of slavery. Wilsey observes that “Lincolnian Unionism was a Christian nationalism that was an exemplar to the world, manifesting hope and flourishing through human freedom and equality under God.”

Woodrow Wilson subsequently added further idealism to this mix by portraying America as spreading its freedom abroad as he unsuccessfully advocated U.S. participation in the League of Nations. John Foster Dulles (the Secretary of State under President Eisenhower and the subject of a Wilsey biography) further viewed America’s mission as that of “forging peace” in the aftermath of World War II and the resulting Cold War.

Wilsey believes that the view of what he calls “Christian America,” a sixth form, emerged with the publication in 1977 of a book by Peter Marshall and David Manuel, "The Light and the Glory" Those who identified with Christian Americans and their contemporary successors stressed three themes. They believed that American founders were Christians. Theologically, they believed that God had uniquely blessed America. Philosophically, they believed they could interpret the intent of the founders much as one would interpret scripture. Wilsey notes that while earlier conceptions of Christian nationalism were forward-looking, its modern iteration is more nostalgic, looking back to an imagined past and cherry-picking facts from history.

While Wilsey’s article does mention it, others have identified a more militant phase of Christian nationalism, intent on political goals such as making abortion illegal and loosening restrictions on government funding of religious schools. This version, they think, is a threat to religious liberty and the "separation of church and state" guaranteed in the First Amendment.

Author Katherine Stewart says in "Christian Nationalists Are Excited About What Comes Next," a guest essay published in The New York Times in July 2022, that a once-considered fringe doctrine, “Seven Mountains Dominionism,” has become more mainstream as evidenced in statements by state and national politicians. This doctrine stands for the idea that Christians and their beliefs should dominate key “mountains” of American society, including the government. The decision by the U.S. Supreme Court to overturn Roe v. Wade and a woman’s right to make her own decisions about abortion is an example of a victory of such Christian nationalists and a threat to American liberties, says Stewart, who also is author of the book, “The Power Worshippers: Inside the Dangerous Rise of Religious Nationalism."

Such militancy has been noted by Paul D. Miller, a research fellow with the Ethics and Religious Liberty Commission, Miller says in “What Is Christian Nationalism?” published in Christianity Today shortly after the Jan. 1, 2021, riot at the U. S. Capitol, that many of the Trump supporters seeking to overturn the presidential election sported Christian symbols as they broke into the building and threatened the lives of elected officials.

This version of Christian nationalism is a problem, as it sees itself as fighting, physically, to preserve America’s identity as a Christian nation, Miller says. And it's not new. While many who worked to abolish slavery were Christian, other individuals and states “used Christianity as a prop to support slavery and segregation,” he writes.

As for Wilsey, he eschews the view of “Christian America” but believes that there is plenty of room for common ground. He thinks that Christians can bring special intensity to the national affirmations that all individuals are created equal and are entitled to equal rights. Citing Steven B. Smith’s book, “Reclaiming Patriotism in an Age of Extremes,” Wilsey further believes that Christians who recognize that “racism is a corruption of American ideals” and that “religious bigotry contradicts the constitutional guarantee of disestablishment and freedom of conscience” have a meaningful role to play in enhancing democratic ideals without threatening democratic values.

Christians, in turn, Wilsey writes, should recognize many individuals of other religious faiths or with no religious faith at all also eschew racism and bigotry and honor the nation’s commitment to human equality and freedom.

This article was published Oct. 4 2022.  John R. Vile is a professor of political science and the dean of the Honors College at Middle Tennessee State University. Deborah Fisher, director of the John Seigenthaler Chair of Excellence in First Amendment Studies, assisted in this article.