Hamilton v. Regents of the University of California (1934)

By John R. Vile
Related cases in Conscientious Objection and Religious Freedom, Incorporation / Application of the Bill of Rights to the States, Free Exercise of Religion 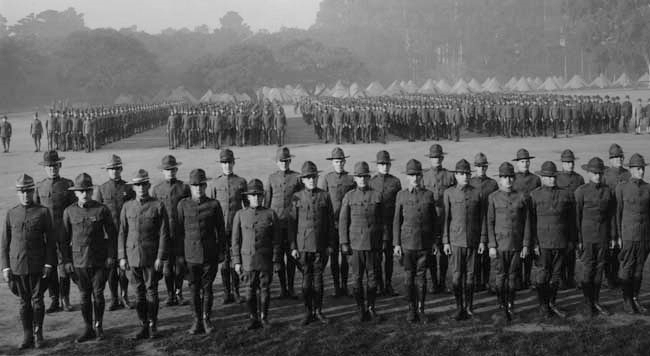 Many colleges had voluntary military programs, like the Students Army Training Corps, which was established in 1918 by the federal government and seen here at the University of California. California in 1931 began to require all students to participate in some military training. After an objection from some students for religious reasons, the Supreme Court upheld the state's law, finding it did not interfere with the student's religious liberty as no one was compelled to attend the state schools. The case is significant because of its recognition that the First Amendment protections applied to state laws, as well as federal laws.

In Hamilton v. Regents of the University of California, 293 U.S. 245 (1934), the Supreme Court upheld the right of states to require university students to receive military training. This was the first Court decision to declare that the free exercise clause of the First Amendment applied to state as well as to the federal government.

The case arose when students who were members of the Methodist Episcopal Church and the Epworth League and their parents objected to a California law requiring that all students who attended the University of California had to receive instruction and discipline in military tactics.

Writing for the majority, Justice Pierce Butler said that the state requirement did not interfere either with the students’ privileges and immunities as U.S. citizens or with their Fourteenth Amendment due process rights. Although the latter clause undoubtedly protected “the right to entertain the beliefs, to adhere to the principles and to teach the doctrines” that led them to object to military training, he did not think that the regulation impinged on such rights.

Butler observed that United States v. Schwimmer (1929) and United States v. Macintosh (1931) had decided that the United States could deny citizenship to individuals who opposed bearing arms. Although he acknowledged that Congress had recognized the rights of conscientious objectors, he argued that such rights originated in these acts rather than being mandated by the Constitution. The fact that the University of California’s tuition was lower than at other schools was irrelevant. No one compelled students to attend, and if they wanted to attend, they needed to abide by the rules.

Concurring, Justice Benjamin N. Cardozo noted that the Fourteenth Amendment applied the First Amendment guarantee of religious liberty to the states. He did not think the University of California requirements interfered with freedom of religion and as incorporated in such cases as Davis v. Beason (1890), especially since the policy did not require anyone to bear actual arms. The policy might be “unwise or illiberal or unfair,” but he observed that this did not make it unconstitutional: “Neither directly nor indirectly is government establishing a state religion when it insists upon such training.” He noted that were the Court to recognize a right not to participate in such training, this might lead others to refuse to pay taxes to further war: “The right of private judgment has never yet been so exalted above the powers and the compulsion of the agencies of government.”