By John R. Vile
Related cases in Contempt of Court, Freedom of the Press 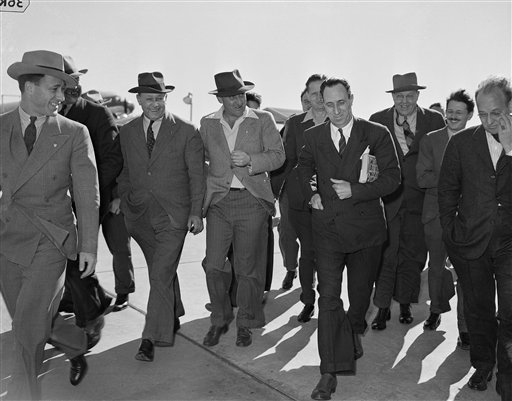 Harry Bridges, right, was an influential labor leader in the United States. Here he is shown being met at the San Francisco Airport by labor leaders when he returned from New York, Oct. 2, 1941. In Bridges v. California, 314 U.S. 252 (1941), the Court used the First and 14th Amendment guarantees of freedom of speech and press to overturn contempt convictions against a newspaper and an Bridges, who had criticized judicial proceedings in pending cases. (AP Photo/Jack Rice, used with permission from The Associated Press.)

The Supreme Court in Bridges v. California, 314 U.S. 252 (1941), consolidated with Times-Mirror Co. v. Superior Court of California, used First and 14th Amendment guarantees of freedom of speech and press to overturn contempt convictions against a newspaper and an individual who had criticized judicial proceedings in pending cases.

Bridges charged with contempt for publishing material that could influence trial

In Bridges, labor leader Harry Bridges sent a telegram to the U.S. secretary of labor, threatening a strike if the state enforced its decision in a labor dispute. The telegram was later published in newspapers. Times-Mirror involved statements in Los Angeles Times editorials that strongly urged a judge to sentence two men to prison.

Writing for the majority, Justice Hugo L. Black observed that punishment for contempt — in these cases out-of-court publication of material that could influence a trial — was based in English common law and not “encased in the armor wrought by prior legislative deliberation.” He observed that in cases since Schenck v. United States (1919) the Court had applied the “clear and present danger” test before upholding practices that impinged on the First Amendment.

In explaining the Court’s decision, Black quoted a scholar to argue that “one of the objects of the Revolution was to get rid of the English common law on liberty of speech and of the press.” He also cited James Madison to show that the framers of the Constitution intended to give the press “the broadest scope that could be countenanced in an orderly society.”

Congress, Black noted, had further declared its understanding in adopting a law limiting the contempt power in 1831. Although many states retained this power, it had not previously been tested in federal courts, which “cannot allow the mere existence of other untested state decisions to destroy the historic constitutional meaning of freedom of speech and of the press.”

States had adopted contempt laws to prevent “disrespect for the judiciary” and “disorderly and unfair administration of justice.” Black did not consider the telegram or editorials at issue in these cases to threaten either value. Judges already knew the Los Angeles Times’ opinion on the pending criminal case, and Bridges’s threat to strike in the event of a particular ruling was not a threat of illegal activity.

Justice Felix Frankfurter’s long dissent was joined by Chief Justice Harlan Fiske Stone and Justices Owen J. Roberts and James F. Byrnes. In the case of the Times editorial, Frankfurter believed the case centered on “a powerful metropolitan newspaper” attempting “to overawe a judge in a matter immediately pending before him.”

Frankfurter stressed that First Amendment prohibitions against abridging speech and press were not absolute. In addition, he traced the history of contempt through English history and state practice, citing, among other cases, Patterson v. Colorado (1907). He thought the Court should give great deference to state legislative judgments on the subject. He added that the judges who had found Bridges and the paper guilty of contempt were not the judges to whom the editorials were directed.