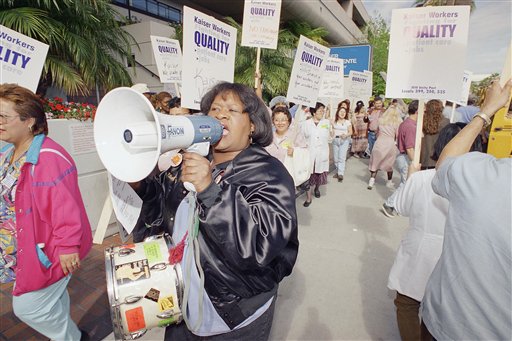 In Building Service Employees International Union v. Gazzam, 339 U.S. 532 (1950), the U.S. Supreme Court upheld an injunction issued by the Supreme Court of Washington against picketers who had sought to force the owner of a small inn into compelling his employees to join a union.

The state’s policy was that no one should have to join a union as a condition of employment. Although the employer had allowed union representatives to meet with his employees, they had voted against joining the union, and the employer had resisted the union’s demand that he limit future hires to union members.

Justice Sherman Minton wrote the Court’s unanimous opinion (Justice William O. Douglas did not participate). Minton cited a number of decisions indicating that picketing was protected by the free-speech provision of the U.S. Constitution, but he also observed that the practice was “more than speech” and could be regulated.

In this case, the picketers were attempting to compel behavior that violated state law and state policy, and the injunction against this picketing had been designed specifically to prohibit “coercion of workers by employers.”

The decision in Giboney v. Empire Storage and Ice Co. (1949) provided an appropriate precedent for the principle that courts could enjoin pickets that advocated violation of state laws. Minton rejected the argument that the cases should be distinguished because Giboney involved criminal sanctions: “It is not the presence of criminal sanctions which makes a state policy ‘important public law.’ Much public policy does not readily lend itself to accompanying criminal sanctions.”

Wise or unwise, the state had the right to prevent pickets from circumventing its laws. In a one-sentence concurring opinion, Justice Hugo L. Black chose to rely solely on the Giboney decision.