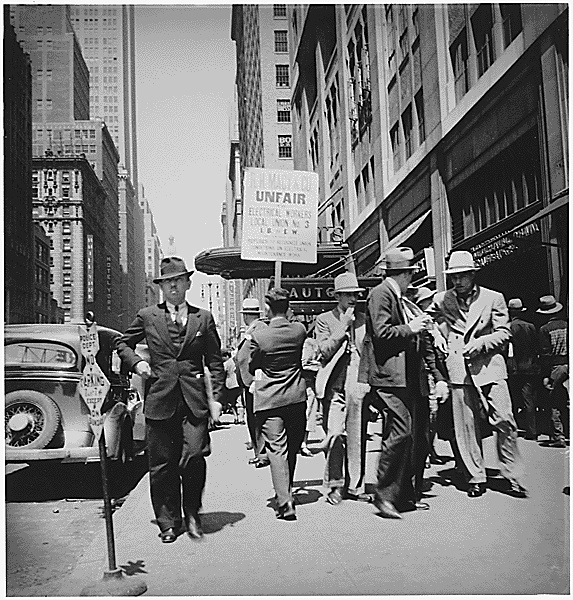 An example of labor strikes in New York circa 1934. Photo from the U.S. National Archives. In Cafeteria Employees Union v. Angelos (1943), the Supreme Court ruled that a New York state court had violated the free speech rights of peaceful picketers in issuing two broad injunctions against them. The group was trying to draw attention to cafeterias who they said were unfair to labor unions. (Image via U.S. National Archives on Flickr, public domain)

In Cafeteria Employees Union v. Angelos, 320 U.S. 293(1943), the Supreme Court ruled that a New York state court had violated the free speech rights of peaceful picketers in issuing two broad injunctions against them.

Picketers accused owners of being unfair to organized labor

One case involved picketers outside a cafeteria owned by Angelos and others, who operated without the help of additional employees. The other involved an incident outside another cafeteria in which picketers were said to have insulted customers. In both cases, the picketers accused the owners of being unfair to organized labor.

In the opinion for the unanimous Court, Justice Felix Frankfurter observed that the decision in Senn v. Tile Layers Protective Union (1937) had established that the constitutional guarantee of freedom of speech protected the rights of individuals to make public “the facts of a labor dispute.”

American Federation of Labor v. Swing (1941) and Bakery and Pastry Drivers and Helpers Local v. Wohl (1942) had further established the right of workers to use pickets to seek public support.

The pickets at issue in Cafeteria Employees were peaceful, and although marchers used the terms unfair and fascist, Frankfurter concluded that “loose languages or undefined slogans . . . are part of the conventional give-and-take in our economic and political controversies.”

He also stated that Cafeteria Employees differed from Milk Wagon Drivers Union v. Meadowmoor Co. (1941), in which the Court had upheld an injunction in a situation in which abuses by picketers were more widespread. Frankfurter stressed that the right to picket cannot be “taken away merely because there may have been isolated incidents of abuse falling far short of violence occurring in the course of that picketing.”