By John R. Vile
Related cases in Freedom of Assembly 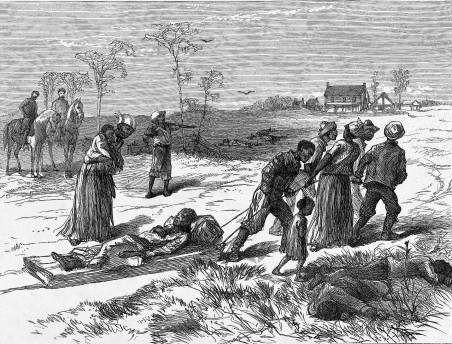 An illustration entitled "The Louisiana Murders — Gathering The Dead And Wounded" was published in Harper's Weekly after the 1873 Colfax massacre, one of the worst instances of racial violence during Reconstruction in which more than 100 blacks were killed. The Supreme Court overturned the convictions of whites who were charged with conspiring to deprive those blacks of their constitutional rights, including to vote. Although scholars usually cite this case as an example of very restrictive reading of the guarantees of citizenship established in the Fourteenth Amendment, the case is also important in First Amendment jurisprudence for the statements made regarding the First Amendment freedom of peaceable assembly. (Image via Wikimedia Commons, public domain)

In United States v. Cruikshank, 92 U.S. 542 (1876), the U.S. Supreme Court threw out the convictions of Cruikshank and other whites who, during a dispute about a gubernatorial election in Louisiana, killed about 100 blacks in the Colfax Massacre and were subsequently charged with conspiring to deprive those blacks of their constitutional rights.

Although scholars usually cite this case as an example of very restrictive reading of the guarantees of citizenship established in the Fourteenth Amendment, the case is also important in First Amendment jurisprudence for the statements made by Chief Justice Morrison R. Waite regarding the First Amendment freedom of peaceable assembly.

Consistent with such decisions as those in Barron v. Baltimore (1833), which the Court issued prior to adoption of the Fourteenth and Fifteenth Amendments, Waite sought to limit the rights of national citizenship by distinguishing it from state citizenship.

He argued that the right to peaceable assembly was a natural right that preceded the adoption of the Constitution, rather than a right granted by it. For Waite the First Amendment prohibited Congress from abridging the right to assemble but “was not intended to limit the powers of the State governments in respect to their own citizens, but to operate on the National government alone.”

Arrested individuals not indicted for attempting to deny freedom of petition

The Court found that while Congress has the right to protect individuals meeting for purposes of petitioning the national government, the indictments had made no claim that the individuals arrested and charged were attempting to deny this right to anyone or that the actions in this case were specifically directed at individuals on the basis of race.

Consistent with the distinction the Court would later draw between state and private action in the Civil Rights Cases (1883), Waite wrote in the high court’s decision that the enforcement clause was not designed to protect individuals against the actions of other individuals but only from those of the state itself.

Waite further criticized the indictments for not enumerating the crimes being indicted and for not demonstrating that these crimes had been committed on the basis of race. Given that the charges were so vague, those indicted had been deprived of due process.

Justice Nathan Clifford’s concurring opinion focused on this vagueness of the charges rather than on the validity of federal attempts to protect private rights.