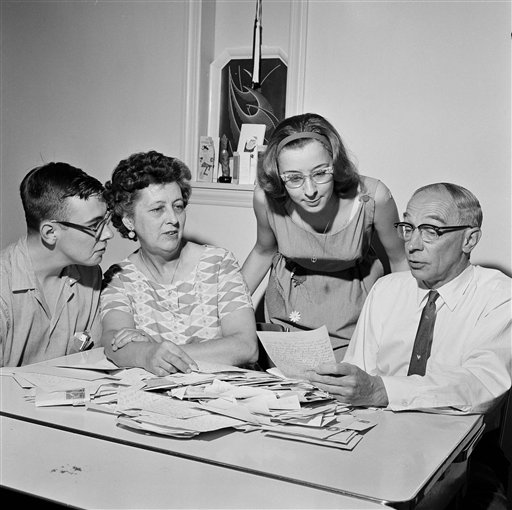 In this photo, Edward L. Schempp and his wife Sidney, and their children, Roger, 20, and Donna, 17, of Roslyn, Penn., read one of about 500 letters that they received from people all over the U.S. agreeing and disagreeing with their beliefs on religion in public schools, June 17, 1963. In Feb. 1958, Mr. and Mrs. Schempp brought suit that led to a ruling by the Supreme Court banning bible reading and the recitation of The Lord's Prayer in public school in Abington School District v. Schempp (1963). The Court later used this case as a precedent in Chamberlin v. Dade County Board of Public Instruction (1964) to strike down Bible reading and prayers in Florida schools. (AP Photo/John F. Urwiller, used with permission from the Associated Press)

The Court decided that the lower court had not appropriately raised issues relative to baccalaureate services, a religious census of pupils, and a religious test for teachers.

The Court pointed to the precedent in Abington School District v. Schempp (1963) striking down devotional exercises and to Asbury Hospital v. Cass County (1945) dismissing the other issues.

Justice William O. Douglas, in a partial concurrence joined by Justice Hugo L. Black, argued that the issue of a religious test for teachers — which the lower court had justified as a way of promoting the morality of teachers — should be argued and might be covered by the Court’s decision in Torcaso v. Watkins (1961).