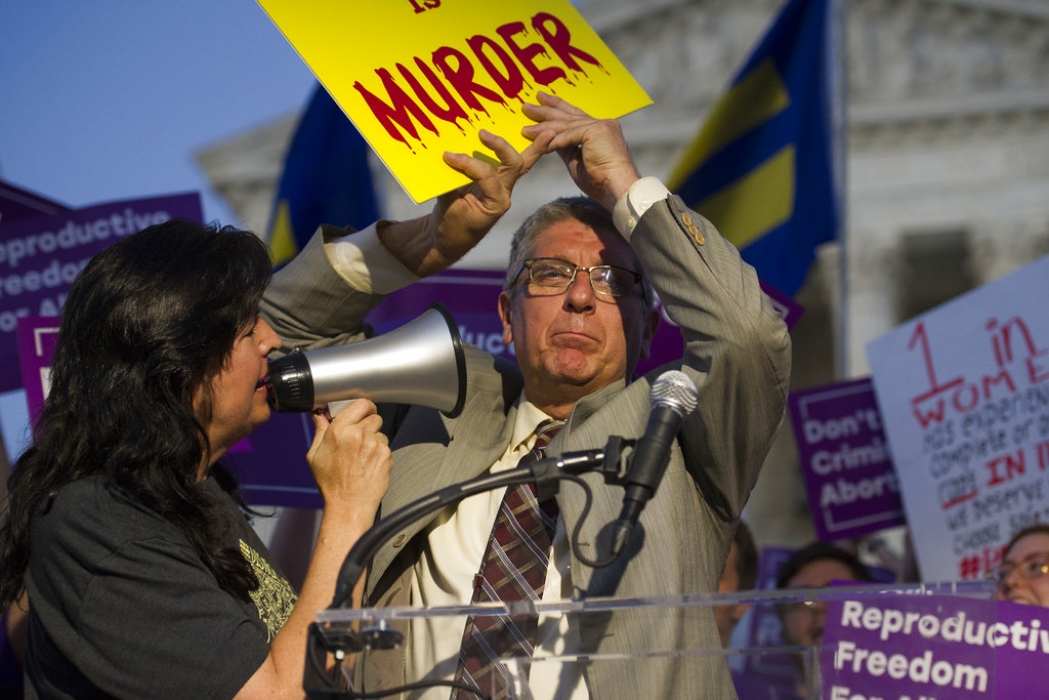 In Hirsh v. City of Atlanta (1990), the Supreme Court denied an application to stay an injunction issued by a Georgia court against members of the anti-abortion group Operation Rescue, saying it was proper for a court to issue time, place and manner restrictions upon a class of people who repeatedly engaged in unlawful conduct. The group argued that the injunction, which prohibited them from demonstrating within 50 feet of an abortion clinic, was a form of prior restraint. In this picture, Operation Rescue founder Randall Terry is confronted by a pro-abortion rights protester in front of the Supreme Court in July 2018. (AP Photo/Cliff Owen)

The one-sentence Supreme Court decision in Hirsh v. City of Atlanta, 495 U.S. 927 (1990), denied an application by the anti-abortion group Operation Rescue to stay an injunction issued by a Georgia court prohibiting its members from demonstrating within 50 feet of an abortion clinic and imposing further restrictions upon them.

The Operation Rescue members had argued that the injunction violated their First Amendment right to free speech. The Georgia Supreme Court, however, upheld the injunction as a regulation designed to protect the rights of Atlanta’s citizens to obtain medical services.

In a concurring opinion, Justice John Paul Stevens asserted that this case could not be distinguished from Village of Skokie v. National Socialist Party of America (Ill. 1978), which involved a march by uniformed Nazis, on the basis of the content of the speech. He, however, continued, “It is entirely proper . . . to draw a distinction between injunctive relief imposing time, place, and manner restrictions upon a class of persons who have persistently and repeatedly engaged in unlawful conduct” from one “that constitutes a naked prior restraint against a proposed march by a group that did not have a similar history of illegal conduct in the jurisdiction where the march was scheduled.”

Justice Anthony M. Kennedy, in a dissent joined by William J. Brennan Jr., Thurgood Marshall, and Antonin Scalia, argued that the Court was required to treat this case as it did in Skokie.

The Supreme Court of Georgia subsequently heard the case in Hirsh v. City of Atlanta and Williams v. City of Atlanta (1991) and upheld the restrictions imposed by the lower court. The Supreme Court of Georgia pointed to Operation Rescue’s persistent violations of the law and saw the injunction as narrowly tailored to meet such interests, consistent with reasonable time, place, and manner restrictions. Two dissenting justices thought the restrictions were too broad.