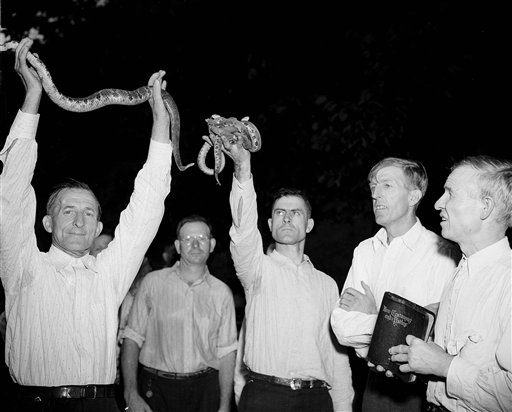 Snake handling is a religious ritual practiced by a small fraction of rural charismatic Protestants. Some states have adopted laws prohibiting snake handling, which state courts have consistently upheld against First Amendment challenges as reasonably health and safety regulations.  In this 1944 photo, members of the Church of God participate in the practice in Evarts, Kentucky. (AP Photo, used with permission from the Associated Press)

Snake handling is one of the more curious religious rituals practiced in the United States. It has implications for the free exercise of religion clause of the First Amendment.

Practiced by a small fraction of rural charismatic Protestants, snake handling is often identified with the Church of God with Signs Following or other holiness churches.

Snake handling as a religious ritual began in 1909 in Tennessee

Snakes, typically rattlers, are passed among the congregants for handling. Church elders sometimes patrol the church to ensure the snakes do not go beyond certain boundaries. Most participants are not bitten, but some have died from snakebites. In some churches, this practice is accompanied by drinking poison and other tests of faith.

The practice of snake handling, which adherents justify through biblical texts such as Mark 16:17–20 and Luke 10:19, was apparently begun in 1909 by one of the founders of the Church of God with Signs Following, George Went Hensley of Grasshopper Valley, Tennessee. It then spread to other states, including Georgia, Alabama, and Kentucky. Pastor J. D. Browning of Pine Mountain, Kentucky, is credited with reintroducing the practice there in 1934.

Some states have adopted laws prohibiting the practice of snake handling or limiting it to trained individuals. No case on the practice has reached the Supreme Court. State courts have consistently upheld the state laws as reasonable health and safety regulations, such as the Court of Appeals of Kentucky in Lawson v. Commonwealth (1942) and the Alabama Court of Appeals in Hill v. State (1956).

The Tennessee Supreme Court upheld a similar law in Harden v. State (1948). In Harden, the court cited the distinction that the U.S. Supreme Court had drawn in Davis v. Beason (1890), Reynolds v. United States (1879), and Cantwell v. Connecticut (1940), between the regulation of religious belief and action.

And so the Tennessee Supreme Court adopted a similar ruling in Swann v. Pack (1975) when it upheld an injunction prohibiting members of a church from handling snakes and extended it to the drinking of strychnine.