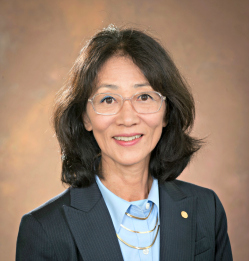 Mutsuko Endo Hudson is Professor of Japanese and Linguistics, and Director of the Japanese Program at Michigan State University (MSU). In summer she regularly teaches in the Master’s Program in Japanese Language Pedagogy at Columbia University. Her M.A. (1977) and Ph.D. (1989) are in linguistics, both from the University of Michigan. She received her BA in Japan in 1973 with a major in Teaching of Japanese as a Foreign Language, and has taught in the U.S. since then. She is a recipient of the 2004 Japanese Foreign Minister's Certificate of Commendation (外務大臣表彰), 1993-94 MSU Teacher-Scholar Award, and 1992-93 Lilly Endowment Teaching Fellowship.

Her major research areas are in linguistics (pragmatics, discourse, and functional grammar) and Japanese language pedagogy. Her recent publications include: Modern Japanese Grammar: A Practical Guide (2013) and Workbook (2014; co-author); Japanese Language and Literature 46-1, Special Section in Honor of Dr. S. Makino: Current Issues in Japanese Language Education, Acquisition, and Linguistics (2012; editor); Japanese/Korean Linguistics 13 (2008; co-editor); and articles such as「日本語能力試験N2 受験準備のための講座：実践とその意義」(2014),「日本の大学生の言語使用：質問に対する返答の形を中心に」(2014), ‘Three uses of kata ‘person’ in Japanese’ (2012), ‘Student honorifics usage in conversations with professors’ (2011), and ‘Riyuu “Reason” for nai desu and other semi-polite forms’ (2008). She is currently working with co-editors J. Mori and Y. Matsumoto on a book entitled Advances in Japanese Pragmatics.