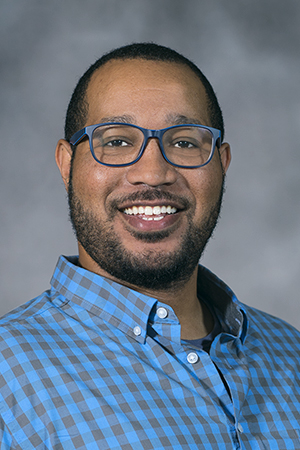 Keonte Coleman, Ph.D., serves as an assistant professor in the School of Journalism and Strategic Media. Coleman comes to MTSU with years of both professional media and higher ed...

Keonte Coleman, Ph.D., serves as an assistant professor in the School of Journalism and Strategic Media. Coleman comes to MTSU with years of both professional media and higher education experience.

Coleman worked professionally as a local television news producer within the Hearst Television company. He received multiple Emmy awards along with other honors during his professional career.

He transitioned to the academic world by teaching at Bennett College, a historically black college for women, in Greensboro, NC. Coleman gained a lot of experience while working at Bennett College. He was an assistant professor first and foremost, but he also took on several academic leadership roles: interim academic dean, department chair, federal grant director, student publication advisor, and internship coordinator.

Coleman earned his doctorate in higher education administration from the University of North Carolina at Greensboro. He received his master's in broadcast journalism from The Newhouse School of Communication at Syracuse University. Coleman proudly began his college career by earning a mass communications bachelor’s degree from Jackson State University.

He’s married to the love of his life and is the proud father of three beautiful children.

Speaker, “Stop and Think Before You Get Canceled” – Creative Conversations/Questioning Civility: A Mini-Conference at Randolph College [March 2021]

Moderator, “Racial Justice Protests and the First Amendment” – Presented by the John Seigenthaler Chair of Excellence in First Amendment Studies and the Free Speech Center in the College of Media and Entertainment at MTSU, Murfreesboro, TN [September 2020]

Presenter, Summer Research Opportunities Program at University of Illinois [Summer 2001] Committees on Institutional Cooperation Conference at the University of Michigan “Why Aren’t They Reporting the Games? An Examination of the Lack of African American Sports Journalists,” Advisor:  Dr. William E. Berry

[July 2021] 2021 AEJMC MAC Division Summer Newsletter: Save Yourself the Headache and Ditch the Current Events Quizzes

[July 2021] 2021 AEJMC MAC Division Summer Newsletter: Save Yourself the Headache and Ditch the Current Events Quizzes

December 4, 2019: Black Enterprise Magazine: "Here is a List of 33 Black Scholars for The President of Purdue University Who Thinks They are ‘Rare Creatures’"