The Impact of Auto Tariffs on the Tennessee Economy 2019

Tennessee's auto industry dodged the first bullet.  Last year, President Trump initiated an investigation by the Department of Commerce into the national security threat posed by imports of automotive products into the U.S.  This was seen as potentially step 1 of imposing tariffs on the EU and perhaps Japanese auto industries. This was opposed by American automakers. Though the investigation came back in the affirmative, giving the president the right to impose the tariffs, he did not do so within the 180 day window in which he was required to act.

But he has continued to threaten the imposition of tariffs, including at this year's World Economic Forum in Davos. So the auto industry is not out of the woods.  Auto tariffs may very likely rise to the top of the trade agenda.

Why does this matter to Tennessee?  Because the auto industry is the state’s largest manufacturing sector.  Depending upon how you measure it, somewhere between 70,000 and 100,000 Tennesseans work in it.  The value of its production stands at above $40 billion. It is also the state’s largest export sector. In 2018, the states auto sector generated $5.3 billion in exports. Upwards of 400 automotive manufacturing establishments in Tennessee are exporting, and another 100 wholesalers are as well.  The health and performance of this industry has a huge impact on the state’s economy, not to mention the lives of many, many Tennesseans.

What if tariffs do occur? What will happen to the automotive industry and to the economy of this state? 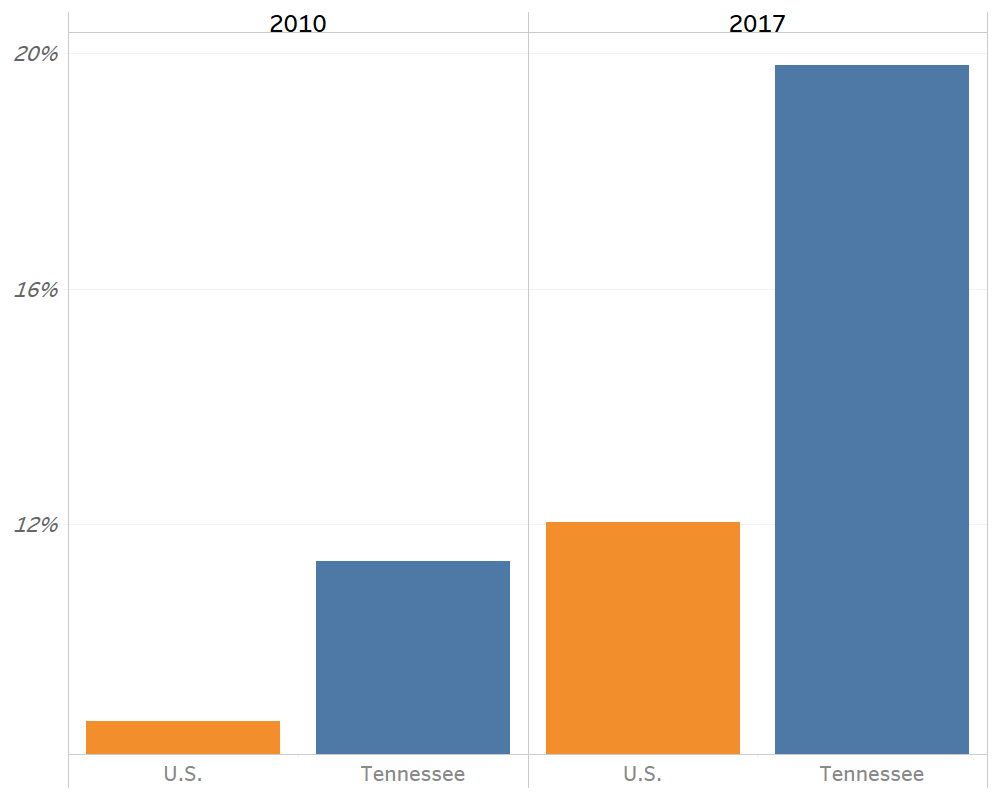 The Location of Tennessee Auto and Auto Parts Exporters, sized by Employment

What do we Know from Other Cases?

It might be worthwhile to look at other “trade wars” to answer some preliminary questions.  The first is, if tariffs are imposed, do prices really go up?  Are they passed-through to the consumer?  The second is, will imports really go down?  The answer to a third possible question, will our trade partners retaliate, is almost too easy to answer.  The answer, as you likely know, is “YES.”

A number of recent academic studies have found that not only do prices go up, they go up by at least the amount of the tariffs.  The pass-through is complete. We have two charts that show this.  One is the experience of the U.S. imports placed on washing machines in 2018.[1]  The average price of one of these has risen $90 since the tariffs were placed on them. The other shows the price rises following the increased tariffs on aluminum. In both cases we can see the price rises. 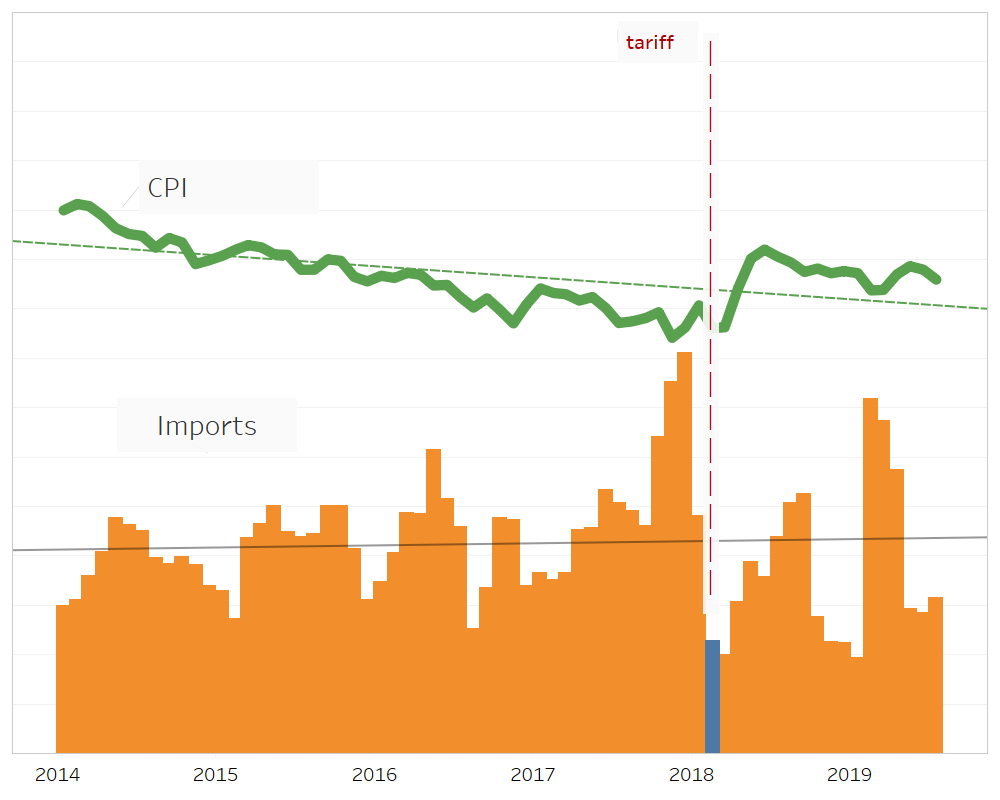 The level of imports is trickier because in both cases there was increased importing just before the tariff actions came into force, which is totally logical behavior. But we can say that whatever the fall off in imports that occurred, it has not been massive.  To put this another way, domestic producers did not step in to replace the higher priced imports.  Instead, imports mostly continue, just at a higher price. 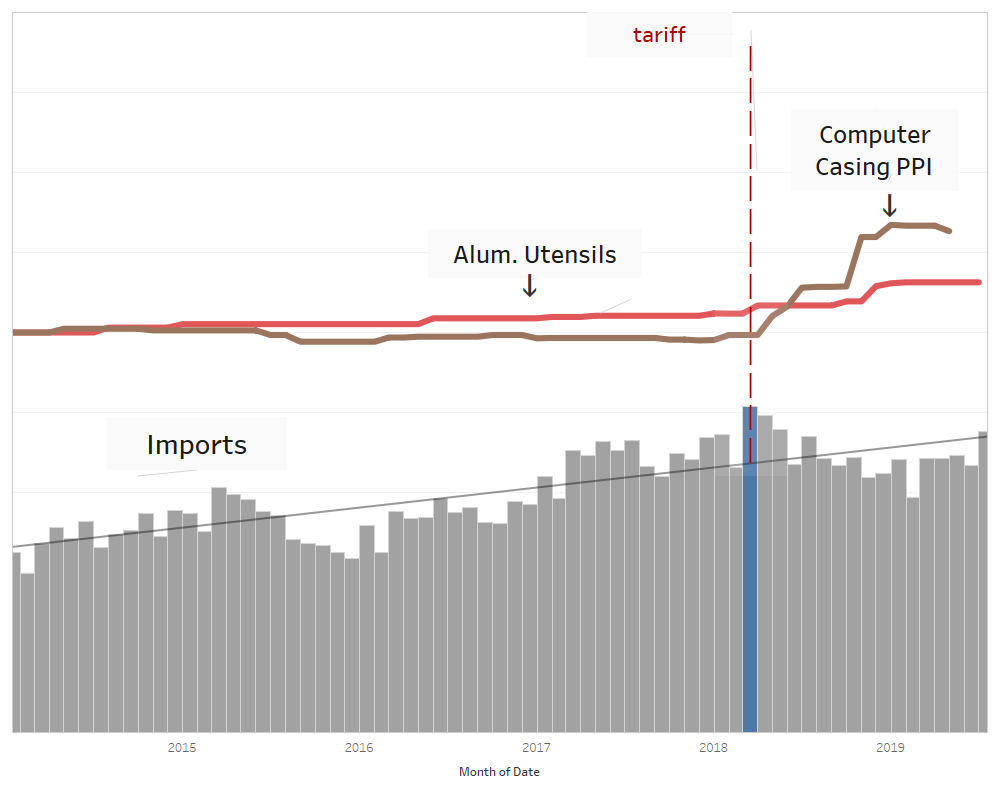 Around seventy-seven percent of the price of a car comes from the parts that go into it.   Many of these parts are imported.  Thus, the first thing to consider in assessing the impact of tariffs on auto parts is how they may raise the final cost of a Tennessee-made car.  There are of course innumerable possible tariff scenarios to consider.  To simplify, we choose three: a ten percent tariff on Japanese parts, a ten percent tariff on EU (Germany, really) parts, and a “worst case” scenario of a twenty-five percent tariff placed on both.  Based on the percentage of parts coming from these locales and the level of possible tariffs, we arrive at the post-tariff cost of the automobiles.

The price increases are significant.  GM, with the lowest percentage of European or Japanese parts, has the smallest price rises but even here a car will cost anywhere from several hundred to several thousand dollars more. To what extent will this deter potential new car buyers?

The Impact of the Increased Prices

We can presume that auto makers will not like to increase their prices!  But can they avoid it?  In the short term, not likely.  There are a number of reasons why the production of the needed auto parts cannot be simply shifted into the U.S. or even move to some third country.  Parts today are not just purchased off the shelf.  The suppliers have worked for years with the auto manufacturers to jointly develop and produce company or model specific parts. This is all lost if Nissan, VW, or GM suddenly shift suppliers. Moreover, many suppliers have linked ownership structures with these companies.  Over ninety percent of the parts that come in from Japan, for example, are from “related party” suppliers. There are also quality issues to consider.  Anecdotally, we have heard stories of particular auto parts that are imported from a particular supplier because no other can make a comparable product.  More generally, neither Japan nor Germany is a low-cost producer.  Imports from such places involve quality considerations more than they do price.  If all this isn’t enough, an academic literature suggests that suppliers seldom move into the U.S. simply to avoid trade actions.  The conclusion here is that over the short-term, there is little alternative to raising prices.  Automotive companies do not have the profit margins to avoid it.

For this reason, we assume that the price increases in Table 1 are pretty realistic.  We make use of other studies that have estimated the price elasticities for automotive price increases. A price elasticity simply states how much sales fall for each dollar the price increases.  For the short run, studies suggest that for every dollar the car price rises, the value of automotive sales goes down by $2.  Over the longer run (three years or so), the decline in sales “improves” to a loss of about sixty cents. From these numbers, we can estimate the decrease in automobile sales following a tariff increase.

However we must also introduce a second problem.  If the U.S. imposes tariffs, it is highly likely that the target nations will respond in kind.  As a result, outside the U.S. the price of American cars will rise relative to price of foreign cars.  This will make U.S. cars less competitive in third markets. In 2018 Tennessee exported cars valued at $705 million.  Under retaliation, some of those sales are going to be lost. In Table 2, we combine these lost exports with the lower domestic sales to estimate the total value of the decline in car sales over the short run, and then over the longer run (more than three years) using several tariff scenarios.  The “best” case is an annual loss of over $100 million.

Table 2: The Estimated Decline in Auto Production after a Tariff

But that’s not the end of the story. This loss will percolate through the automotive supply chain.  As the demand for cars goes down, the demand for auto parts will go down as well.  An input-output analysis leads us to estimate that in the first three to five years after tariffs are imposed the value of the total industry output will fall in the range of $460 million in the case of a ten percent tariff on EU automotive imports to upwards of $3.6 billion if a twenty-five percent tariff is imposed on both Japan and the EU.  As the years go on, industry adjustments should reduce this impact to a degree.  We would expect the long term annual decline in the value of output under these two scenarios to be around $170 million to $1.3 billion respectively. The reduced auto industry will in return lead to reduced purchases in other sectors, so that we wind up with a short-term impact on the total state economy of between $510 million and $4 billion, again using our the most limited and the most extreme scenarios.

For many people, the bottom line is employment. If you pull hundreds of millions of dollars of production out of the automotive sector, what happens to the jobs?  Table 3 shows our estimates of the losses that would accompany the production declines we have estimated.  The losses are divided into those experienced by the auto manufacturers themselves, those experienced by parts suppliers, and losses that would be outside of the auto sector.  These latter, termed “induced” losses, are people that will lose their jobs as a result of the general shrinking of the state economy that would occur as the auto industry spend less and lays off employees.

Even at the lowest level ten percent tariff (and the consensus seems to be that President Trump prefers twenty or twenty-five percent), we would anticipate a thousand job losses.  At higher tariff levels we could be talking layoffs of a tenth of the industry’s workforce.

And the Longer Run?

The one question that remains is, over the longer run, will local suppliers expand production to supplant higher priced imports?  We noted that we would not expect this to happen over the short run. But could it be that, faced with permanent tariffs, Tennessee auto makers will decide to turn to domestic suppliers?  The truth is that this is extremely hard to determine.  Some of the reasons given for why the sources of supply will not shift in the short run may hold for the longer run as well.  If in fact production does shift, do we know it would be to Tennessee? Or would it be to Mexico or to some other part of the U.S.?  And, if production shifts to the U.S, will the cost of the parts stay the same or go up?  There is a long history of domestic firms raising their prices when tariffs are placed on their imported competition.

So consider our last table speculative.  Using the global pattern of current auto parts imports, we attempted to estimate the extent to which local suppliers would expand production in this state if and when the Tennessee car companies threw in the towel, so to speak. We further adjusted the expansion to incorporate the price effects that would accompany it.  In all of our scenarios, the long-term gain from production shifts does not equal the job losses that would result from the tariffs.

We have no insight on whether tariffs will be levied or on whom!  But if they are, we can make some conclusions for Tennessee.  The auto industry can expect to lose significant sales, first as domestic car sales and exports are hit and next as the demand for parts goes down as a result of this. In the worst case, this could affect up to ten percent of total Tennessee auto industry production. Even in the best case, we are talking in the range of two percent of production.  Though “two percent” might sound modest, recall that this is the same rate as current U.S. GDP growth. This would be a difficult blow to the state economy.  Though the impact would soften as the years went on, some of the loss would be very long-lived. Whatever positive production relocations as may occur do not appear to be enough to offset the loss.

It's very difficult to see the imposition of auto tariffs as anything other than very bad news for most Tennesseans. We don’t want to exaggerate and claim the sky will fall.  But people will lose their jobs, and many others will see their incomes reduced. The state’s largest manufacturing sector will take a very big hit.  That is seldom good news. We have tried to put some numbers on exactly how bad the news will be.

[1] The data (and price estimates) for this chart comes from Aaron Flaaen, Ali Hortarsu, and Felix Tintelnot. 2019. “The Production, Relocation, and Price Effects of US Trade Policy: The Case of Washing Machines,” Becker Friedman Institute Working Paper 2019-6. University of Chicago.