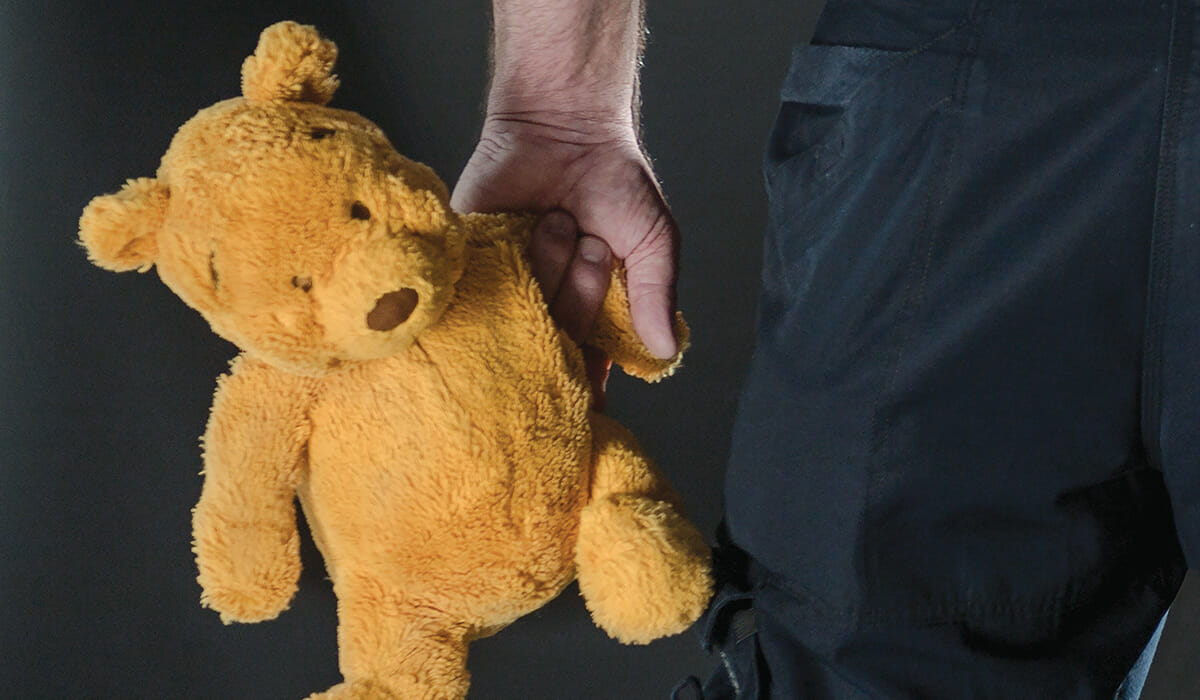 Danny Cupples, a Maury County paramedic and death scene investigator, regularly travels across the state, talking to other first responders. There’s one story he always shares. It’s about the day in August 2007 when his sister called him, crying hysterically, to say that her 5-month-old son, Adam, was dead. The telling never gets any easier, but Cupples considers it critical to his mission. He’s part of a three-person team that teaches Tennessee’s first responders how to investigate the death of an infant who passes away with no obvious explanation.

The training was standardized in 2004, after Tennessee’s legislature mandated it for every law enforcement officer, firefighter, and EMT in the state.

Given that tall task, several divisions within the Tennessee Department of Health (DOH) turned to well-known experts—MTSU’s Center of Health and Human Services (CHHS)—to help fulfill it. Originally founded in 1993 through a gift from the Adams family of Murfreesboro that created the Adams Chair of Excellence in Health Care Services, CHHS collaborates with public agencies and nonprofits to improve the well-being of Tennesseans through training, research, communication, and education.

“Because of our history of doing professional training for health providers, the state came to us and said, ‘We need some help developing and implementing a training program. We need to have well-trained professionals, and we don’t have the capacity to do this,’” said Cindy Chafin, interim director for CHHS.

The best practices program CHHS created for DOH uses a “train-the-trainer” model, and now online training as well, to reach all 95 counties in Tennessee. To date, more than 27,000 emergency and municipal workers across the state have received this training, directly or indirectly, through CHHS.

The benefits of this 13-year-old program are multifold. Local health departments have better information about which neighborhoods are at high risk for sudden infant death. First responders are better equipped to assess a death scene and help families grieving the loss of a baby. And medical examiners get better information so they can find the true cause of deaths that, not too many years ago, would have been categorized as Sudden Infant Death Syndrome.

BY FINDING OUT THE CAUSES, WE CAN ACTUALLY PREVENT MORE DEATHS FROM HAPPENING.

Even before SIDS became a dreaded acronym, parents were haunted by what seemed like a cruel form of roulette: put your baby to bed, and there’s a small but terrifying chance that he or she won’t wake up. But medical scientists now know that when a baby dies unexpectedly, it’s rarely an arbitrary twist of fate. Two of the biggest and most controllable risk factors are an unsafe sleeping situation (in a caregiver’s bed, tummy down, or with soft bedding or toys) and exposure to cigarette smoke (both in utero and in the home).

In fact, many medical examiners have stopped using the term SIDS, said Cupples’ training partner, Memphis forensic investigator Sean Lester. Perhaps because of the word syndrome, people often mistake SIDS for a diagnosis, but it actually means that an investigation resulted in no diagnosis. By adopting a new term, SUID, or Sudden and Unexplained Infant Death, doctors and health departments hope to eradicate the widespread notion that an infant dying unexpectedly while asleep is simply an unavoidable tragedy.

But making a finding in a SUID case requires critical details from the death scene. Before the CHHS training, getting those details was challenging in Tennessee, where 90 of 95 counties don’t have a forensic anthropologist to go to the scene or conduct an autopsy, according to Lester. When a SUID case happens in one of those counties, the body and any investigative information must be sent to a regional forensic center in Memphis, Nashville, Knoxville, Chattanooga, or Johnson City.

AT THE LOCAL LEVEL.

“There’s a distance there,” he said. “An investigator from my office can’t go to the scene; we only cover Shelby County. So we make it abundantly clear to the counties we serve that autopsy is only a small part of the investigation. We need a good, thorough scene investigation . . . to help the doctor determine the cause and manner of death.”

The data gathered through this process doesn’t just help clear up the case in question. It’s also used by the Department of Health to identify epidemiological patterns for SUID, including high-risk ZIP codes. Then it’s used by local health departments to target outreach to parents in those neighborhoods, and even by police and firefighters, who can be on the lookout for unsafe situations and possibly prevent tragedies before they occur. This can translate into dollars spent more effectively.

Since the CHHS death scene investigation training was made available online in February 2016, 562 first responders have taken advantage of it, said John Burchfield, who developed the web-based training and helped write the original curriculum in 2004.


From 2012 to 2017, since CHHS has revisited its training methodologies and made some changes with guidance and input from the DOH’s Family Health and Wellness Division, and in conjunction with other efforts that may contribute to improved data collection, SUID forms submitted by investigators went from a 64 percent completion rate to 98 percent according to information shared at the 2017 annual site visit. “Better data equals better decision-making at the local level as to where to direct fiscal resources,” Chafin said.

Efforts by CHHS in this area receive crucial funding from the state Department of Health, whose advocacy in this realm is led by Rachel Heitmann. As section chief of the DOH’s Injury Prevention and Detection section, Heitmann directs multiple public health programs, including child fatality review, fetal and infant mortality review, infant mortality reduction, and sudden death in the young, among others.

“We have seen an increase in the number of forms completed and the quality of data that we receive from the forms, which in turn helps our prevention efforts here,” Heitmann said. “The training really helps the medical examiner with cause and manner of death, because getting this very specific information at the death scene can help the medical examiner determine what the official cause and manner of death is. . . . There’s information that we really wouldn’t get from any other source.” 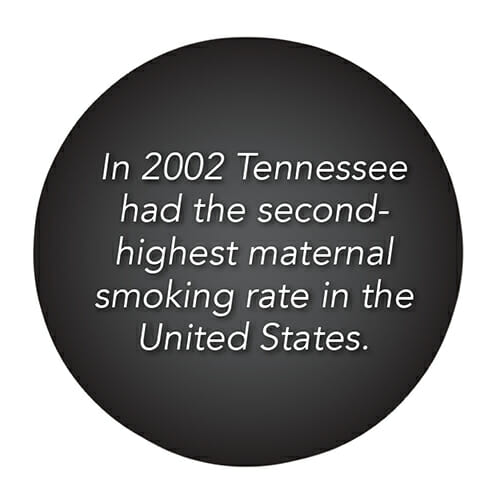 All CHHS programs like SUID investigation aim to improve Tennessee’s health, but many of them also improve its bottom line. For instance, according to Chafin, the center’s smoking cessation program targeting low-income pregnant women is estimated to have saved millions in medical costs.

According to the American Lung Association, smoking during pregnancy is estimated to account for 20–30 percent of low-birthweight babies, up to 14 percent of preterm deliveries, and about 10 percent of all infant deaths. As a result, getting even one pregnant woman to quit can mean big cost savings, in addition to the health benefits.

“The difference in cost for a normal delivery baby versus a low-birthweight baby that has to stay in the NICU averages $90,075 per baby,” Chafin said.

In 2002, when CHHS launched Smart Mothers Are Resisting Tobacco (SMART Moms), Tennessee had the second-highest maternal smoking rate in the United States. More than 29 percent of the state’s pregnant recipients in the Women, Infants, and Children nutrition supplement program smoked.

As a collaboration between CHHS, the state Department of Health, and the Tennessee chapter of the March of Dimes, SMART Moms ran for four years in all 95 counties. Of the program’s 13,000 enrollees, more than 24 percent stopped smoking, far exceeding both the 14 percent success rate of similar programs and SMART Moms’ original goal of 10 percent.

During 2014–16, more than 200 women completed the SMART Moms program in Rutherford County, where MTSU is located. While they can’t say that all of the women would have had a preterm baby had they continued to smoke, they can use statistical analysis to demonstrate a predicted savings of $378,315 based on expected and actual outcomes for low-birthweight babies. 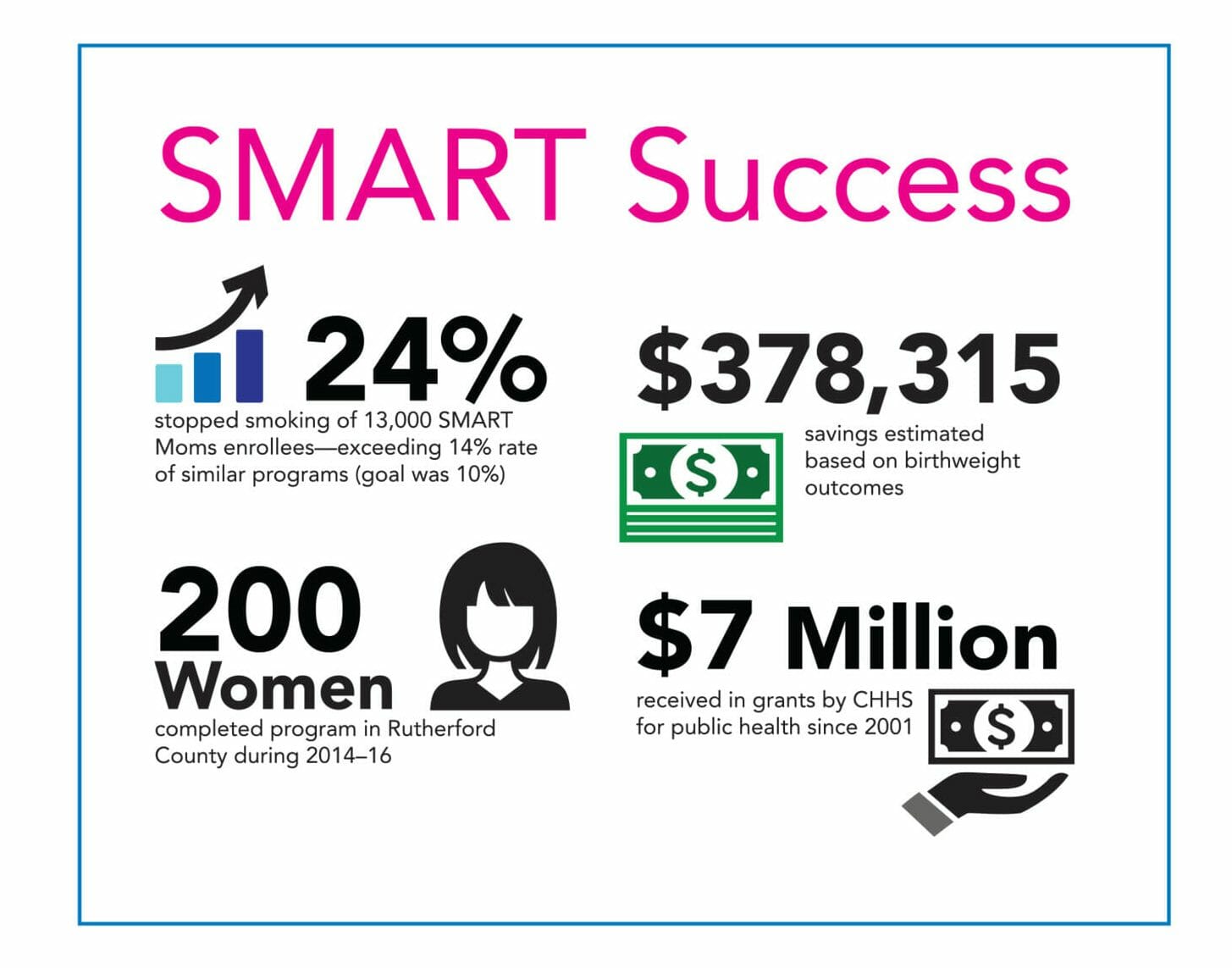 After nearly 25 years of developing such community-level, research-based ways to make Tennesseans healthier, the Center for Health and Human Services is raising its game. Since 2001, CHHS has received over $7 million in grants and contracts to conduct or facilitate public health training, research, and education, bringing measurable benefits to Tennesseans, particularly those in economic distress.

Now Chafin hopes to forge more partnerships with community organizations, amplifying their work through the center’s diverse capabilities. “We can do some of the things they don’t want to do or don’t have time to do,” she said.

So while a partner like the Rutherford County Health Department can focus on patients, for example, CHHS can handle provider training and community outreach, plus add a research element to document the effectiveness of the organization’s work, broaden its scope, or attract new funding.

Dana Garrett, a nurse and director of the Rutherford County Health Department, said her agency’s relationship with the center “has allowed us to work closely on important community health issues such as obesity, physical inactivity, tobacco use, and substance abuse and misuse.”

Chafin also wants CHHS to become more of a thought leader and to help inform Tennessee’s health policies. For example, currently she’s seeking grant funding to study communities at high risk for shaken baby syndrome and to facilitate a pilot program to educate new parents—fathers and male caregivers in particular—on the subject. A similar program, mandated in Pennsylvania, resulted in 50 percent fewer infant deaths due to head trauma.

Through the work of CHHS, Tennessee could follow that lead, turning solid research into lifesaving legislation. 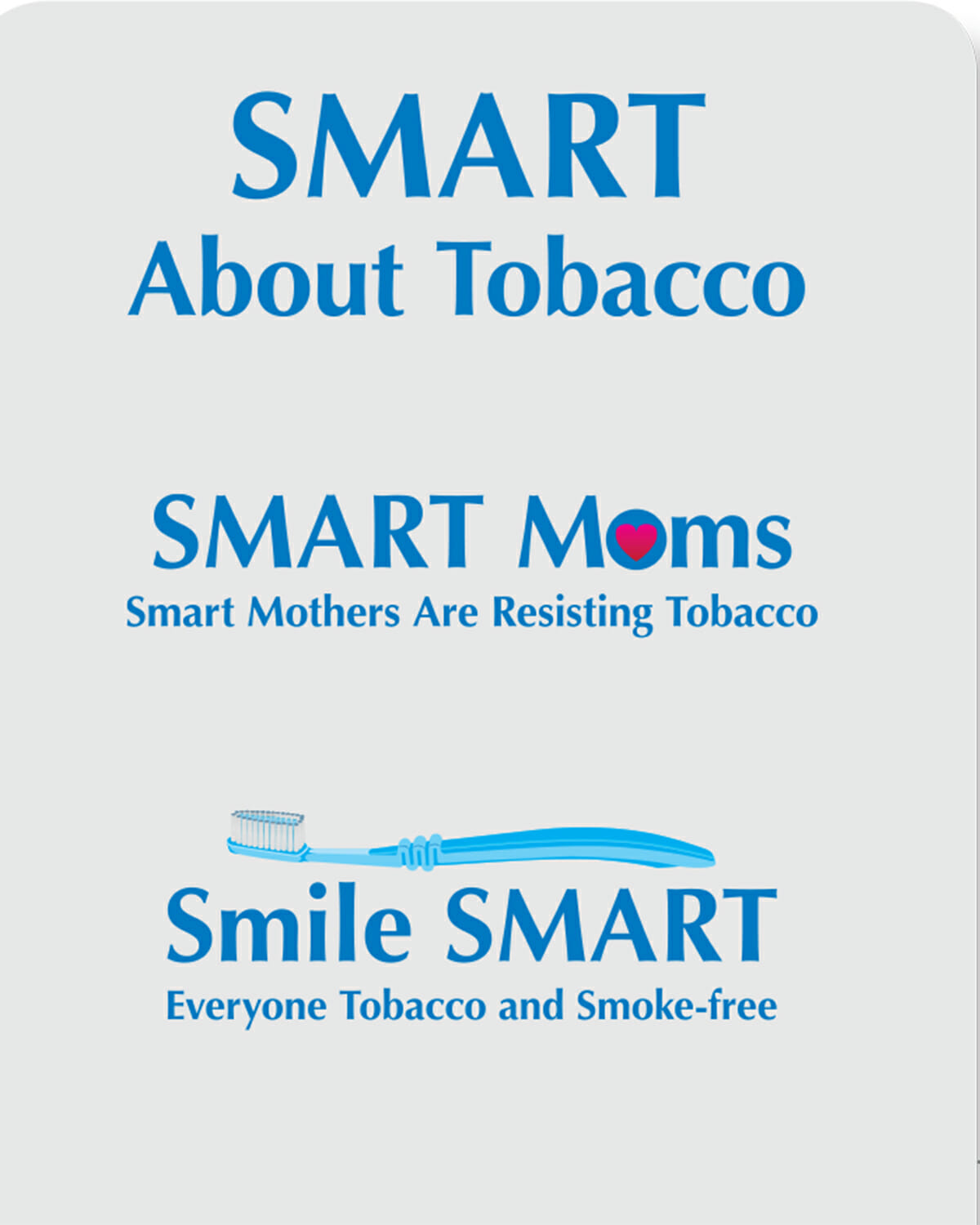 Convincing parents they can prevent sudden infant death is one challenge; convincing them to change longstanding habits is another. But as public health seatbelt and anti-smoking campaigns have shown, it’s possible to transform attitudes and behaviors through time and steady effort. With collaborations among CHHS, the state DOH, and other community partners in their second decade and going strong, the tiniest Tennesseans have momentum on their side. MTSU