MTSU Health Services is pleased to continue its social norms marketing campaign surrounding substance use and other health behaviors by MTSU students.  The campaign is based on the results of two student health surveys, completed in 2015 and 2016.

Throughout the year, you may notice posters, calendars, and other items touting the campaign slogan, “True Blue Health: Revisiting Reality.” The campaign is designed to highlight the large percentage of students who are making healthy choices, including choosing not to use substances like tobacco and marijuana, and/or choosing to limit their consumption of alcohol or to abstain entirely.

The survey results on which the True Blue Health: Revisiting Reality campaign will focus include: 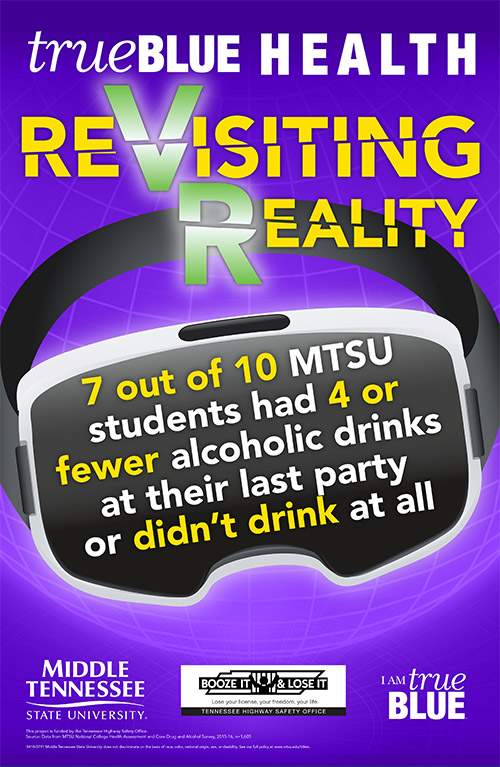 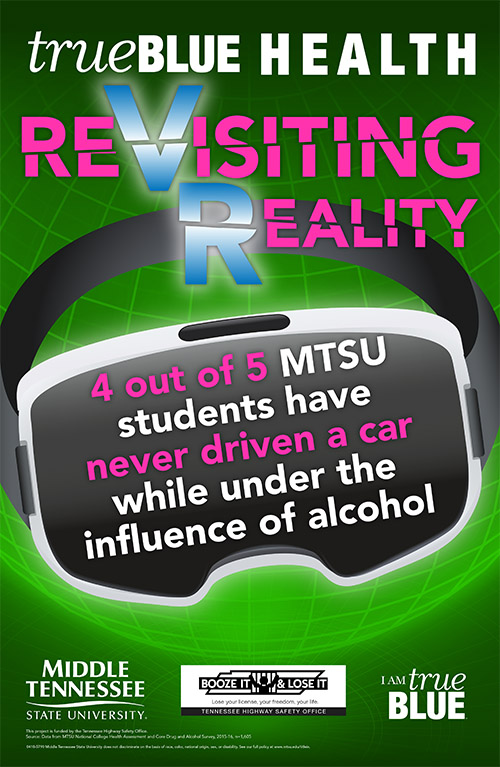 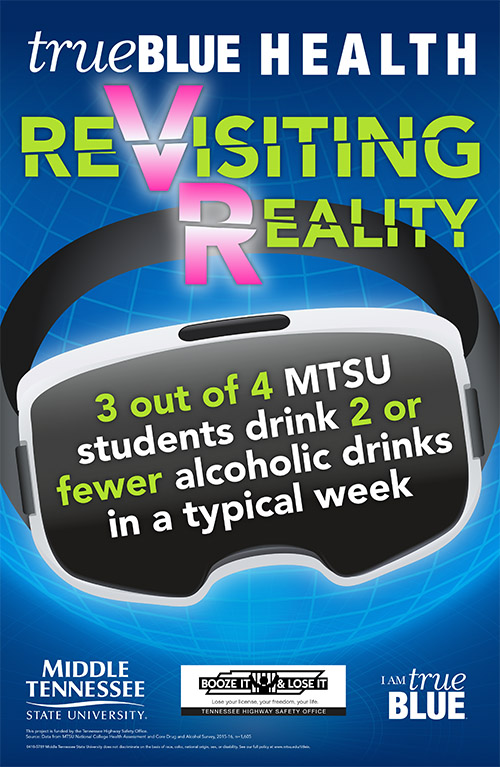 We fully expect that these messages will continue to surprise students, faculty, staff, and administrators, and may even be challenged by them. The messages stand in stark contrast to the stereotypes that exist about college student behavior, which are frequently exploited in movies like Neighbors, Old School, and Animal House. However, our statistics are supported by multiple national research studies which consistently document a large gap between what students perceive to be reality in terms of substance use and other unhealthy behaviors by their peers and what is actually the reality based on reported use.

Both of our assessments, which collected data from over 1600 randomly selected students, were web-based, confidential and voluntary to best minimize self-report bias. Additionally, the demographics of students who responded to the survey are quite similar to the demographics of the overall student population.

While many alcohol, drug, and other prevention efforts have negative undertones, using scare tactics and extreme examples, social norms campaigns stick to the positive. The True Blue Health: Revisiting Reality campaign is designed to recognize the many students who are already making responsible choices when it comes to their personal health. At the same time, it informs students who may not currently be making responsible choices that their experiences are not indicative of the “true” MTSU college experience.

This project is funded under a grant contract with the State of Tennessee Department of Mental Health and Substance Abuse Services.

Data for the True Blue Health campaign come from two surveys conducted in 2015 and 2016.

In the spring of 2016, 685 randomly selected students completed the National College Health Assessment.  This survey was also web-based, confidential, and voluntary.  Once again, the demographics of survey respondents were similar to the university’s demographics.  The breakdown is as follows:

Have a question or concern? Contact the MTSU Health Promotion Office.