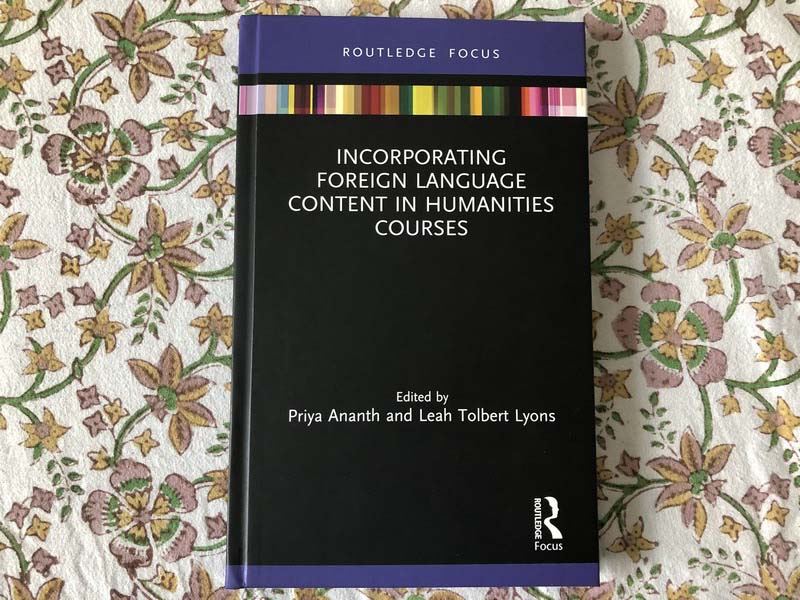 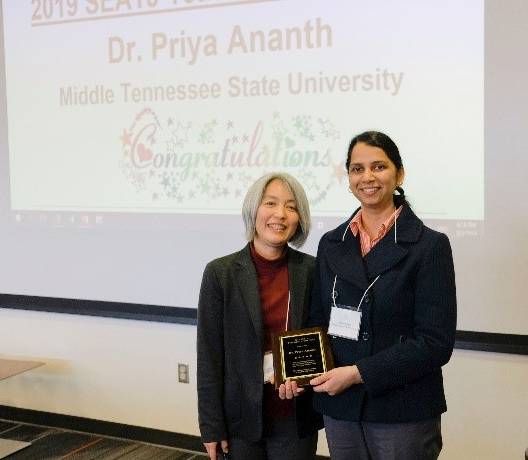 Dr. Ananth is an associate professor of Japanese in the Department of World Languages, Literatures and Cultures.  Dr. Ananth was awarded the 2019 SEATJ Teacher of the Year Award, by the Southeastern Association of Teachers of Japanese (SEATJ) at the 34th SEATJ Conference on March 2, 2019 at Wake Forest University, North Carolina.  This award is given annually to an outstanding teacher of Japanese who demonstrates excellence in teaching and leadership in the field of Japanese Language education.  The nominations are sought from SEATJ members who come from all over the United States and Japan.  As such, this award has national significance.  Here is a quote from the award letter, "We are impressed with your dedication to your students and the advocacy for Japanese studies at MTSU.  We are also very thankful for your leadership and contributions in the field, not only at SEATJ but also at the national level."

Dr. McCullough was awarded the 2015-16 Outstanding Teacher of the Year Award during the MTSU Honors Annual Awards Ceremony on April 28th.  The award was established in November 2004 by Dr. Jan Hayes to recognize faculty members who received the highest student evaluations teaching an Honors course.  One Honors faculty member is selected over the course of the year's evaluations and is given the award at the MTSU Honors Annual Awards Ceremony each April.

Dr. McCullough is an associate professor of French in the Department of World Languages, Literatures, and Cultures.  She received her Ph.D. from Emory University in French Language and Literature.

Dr. Nancy Goldberg is a professor of French in the Department of Foreign languages and    Literatures.  She received her Ph.D. in French Literature from Vanderbilt University.  Dr. Goldberg’s   research interests focus on the interconnectedness of literature and politics in early twentieth- century France and specifically on fiction written during the World War I. She has published two books and twenty peer-reviewed articles and book chapters. These publications, written in English, French and Spanish, have appeared in well-known journals in France, England, Italy, Chile, Australia, and the United States. Recent publications include “Qui donc fermera la porte entr’ouverte?” and “The Home and the Nation in Women’s War Poetry” in Essays in French Literature and Culture and “Rereading Ventura García Calderón” in Hispania.  Dr. Goldberg’s dual-language website, “French Writers of the great War/Les Écrivains Français de la Grande Guerre,” has provided access and information to a global community of students and scholars since 2006.

Dr. Jason Pettigrew is an assistant professor of Spanish in the Department of Foreign languages and literatures. He received his Ph.D. in Modern Foreign languages at the universityof Tennessee-Knoxville. He has been a member of the MTSU faculty since 2011. Dr. Pettigrew has taught Spanish Language course at all levels, Hispanic American literature, and an introductory course about teaching foreign languages. He also serves as the faculty advisor to the MTSU Spanish Club and is a member of the graduate faculty and honors faculty. His area of specialization is Hispanic American Literature, and his main research interest is the literary analysis of poetry.

As an instructor of Spanish, Dr. Pettigrew wants students to realize that knowledge of other cultures and languages can not only help them, reach professional goals, but can also enrich their understanding and participation in national and world communities. He strives to maintain an approach to foreign language teaching that is informed by sound research on second language acquisition. He endeavors to keep his classroom learner-centered, open to different learning styles, and low-anxiety, so that students will feel comfortable experimenting with Spanish. Dr. Pettigrew also strives to integrate culture into his language classes. He not only wants students to build communicative competence in Spanish, but also to open their minds to the peoples and cultures of our interconnected world. The broadened perspective and cultural understanding that students gain through foreign language study are the ultimate goals of all his efforts in the classroom.