On Memorial Day, May 29, Lt. Gen. Keith Huber (U.S. Army, Ret.), senior advisor for MTSU Daniels Center, delivered the keynote address at the closing event for The Healing Field at The Grove at Williamson Place in Murfreesboro. In the video below, he discusses the meaning of Memorial Day.

Along with MTSU sophomore Andrew Wigdor, McPhee and Huber were invited to participate because of MTSU’s commitment to student veterans, the opening of the Charlie and Hazel Daniels Veterans and Military Family Center and a recent expansion into career placement.
Story by: Daily News Journal

Almost 50 of the 122 student veterans who will be graduating in May were honored in the Daniels Center's 7th stole ceremony.
Story by: Randy Weiler

"Tennessee Gov. Bill Haslam not only loves veterans who served their country, but he wants them in Tennessee’s workforce." 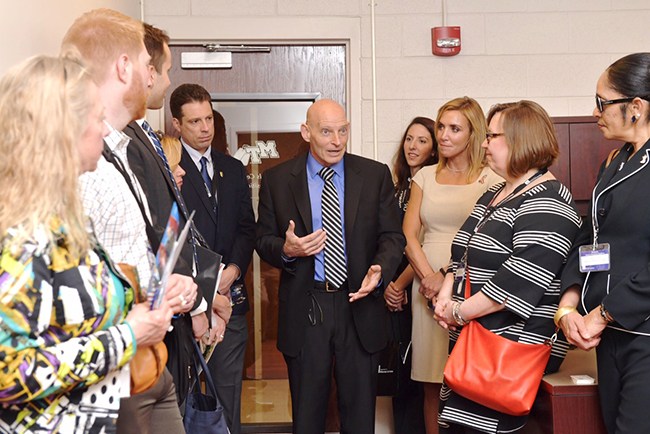 Middle Tennessee State University held a ribbon-cutting Tuesday, Feb. 14, for an expansion of the Charlie and Hazel Daniels Veterans and Military Family Center, gaining added space on the third floor of the Keathley University Center, where the Daniels Center Veterans Transitioning Home will be located.

The nearly 600-square-foot addition — to go with the center's main office area on the first floor of KUC — will assist student veterans and others as they continue and wrap up their education at MTSU and transition to the business world.
Story by: John M. Goodwin 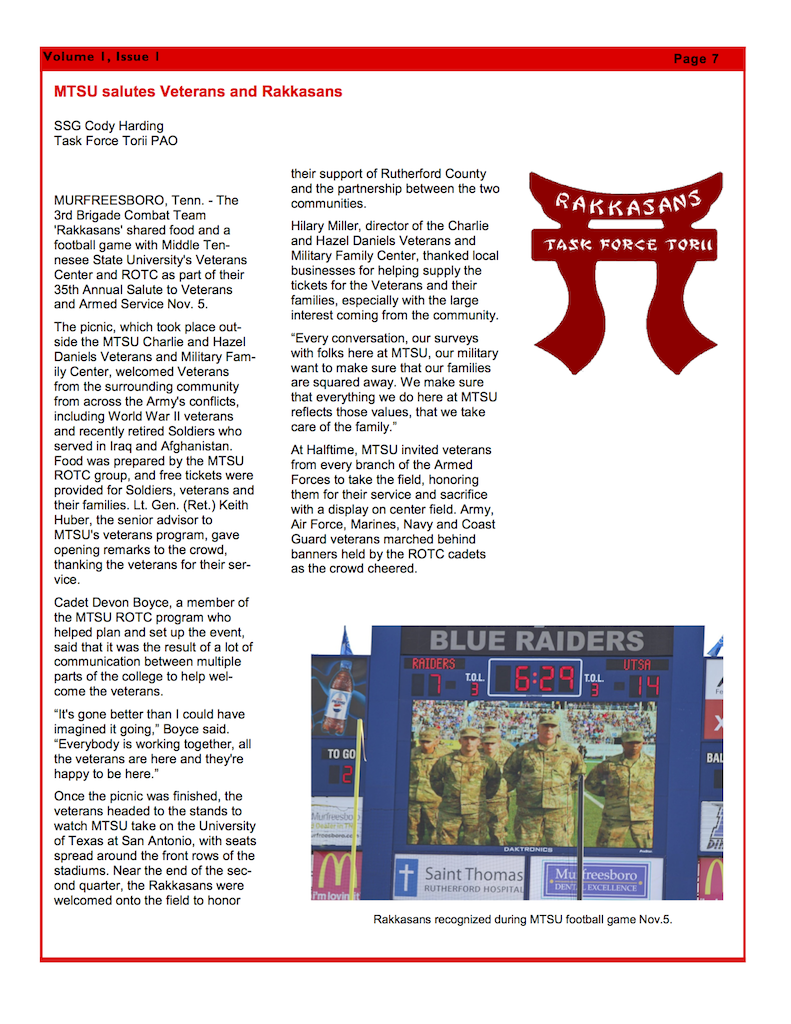 CDT West successfully defends his Honors Thesis on the contributions of MTSU ROTC to past conflicts.  Congratulations, Jake! 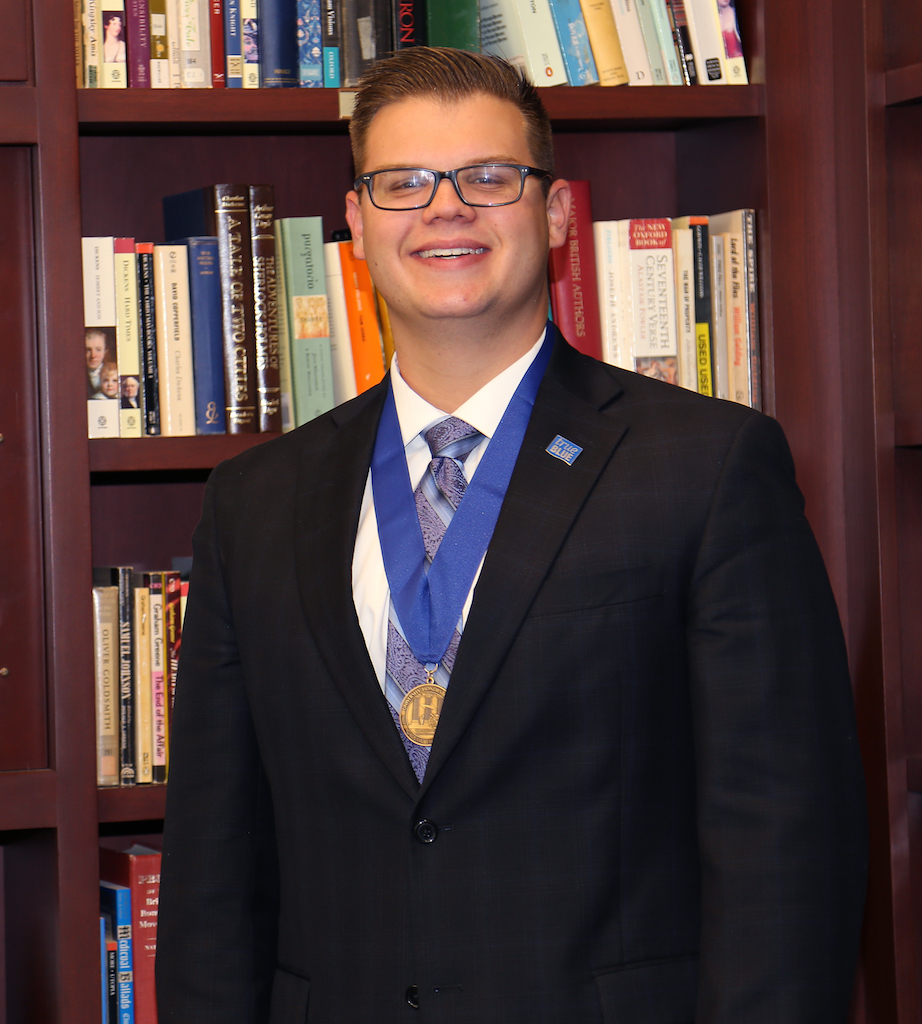 "Lifelong friends Bob Lamb and Bud Morris were shocked and humbled when they learned they would be the 2016 co-recipients of the Joe Nunley Award presented at the conclusion of the 35th annual Salute to Veterans and Armed Services picnic Saturday, Nov. 5.

Operation Song was a sucess!

The Daniels Center partnered up with Operation Song, The Nashville Music Hall of Fame, The Journey Home Project, and MTSU Songwritters to host a songwriting session for seven MTSU student-veterans. "The daylong “Operation Song” songwriting session at MTSU culminated in new friendships, seven unique songs and a mini-concert filled with cheers, tears and standing ovations."
Written by: Gina Fann 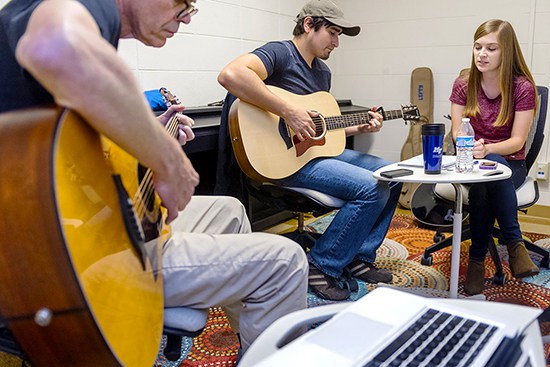 Click here to read the full story about Operation Song

With dignity and precision befitting the honors due fallen American soldiers, skeletal remains unearthed from what was a Mexican-American War battlefield were welcomed home Wednesday, Sept. 28, after 170 years.
Written by: Andrew Oppmann

This was made possible after more than 5 years of diplomatic negotiation initiated by the encouragement of Dr. Hugh Berryman, Middle Tennessee State University anthropology professor and director of MTSU’s Forensic Institute for Research and Education.

Dr. Berryman was present to witness the transfer of the remains from the Army C-12 aircraft and to pay his respects at Dover Air Force Bace. He was joined by U.S. Rep. Diane Black, R-Gallatin, as well as MTSU President Sidney A. McPhee, interim Provost Mark Byrnes, interim College of Liberal Arts Dean Karen Petersen and retired U.S. Army Lt. Gen. Keith Huber, the university’s senior adviser for veterans and leadership initiatives.

Berryman will lead a team of MTSU professors and colleagues from other academic institutions in volunteering to assist the Armed Forces Medical Examiner System in the historical, bio-archaeological and forensic analysis of what is believed to be the remains of as many as 13 members of the Tennessee militia who died in the Battle of Monterrey in 1846. 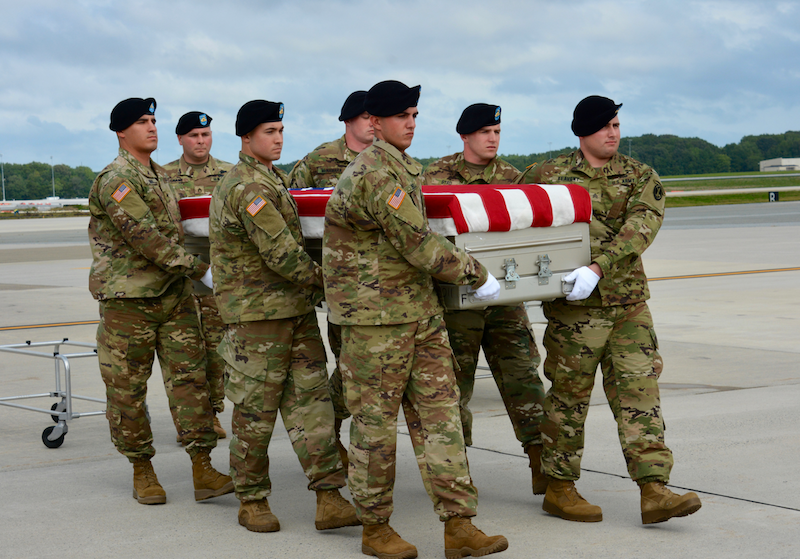 Never forget,” Huber told the crowd. “Remember where you were and how it impacted you, reflect on how precious life is and that life is not a spectator sport. And you must respond and you must focus on being worthy as an individual and as an organization of the democracy that is provided at such a cost.
Written by: Jimmy W. Hart

My Father's War: A Story of War, Survival, and Grace

Sponsored by a Distinguished Lecture Grant & the Dept. of Theatre & Dance

FREE & OPEN TO THE MTSU CAMPUS AND GENERAL PUBLIC

The Artists: Carol Ponder and Robert Keiffer have been theater and music professionals for over 40 years. Carol has been onstage since she was eight years old.  A professional actress with a long resume of all kinds of theater, she is also an award-winning concert and recording artist that has appeared on the Kennedy Center Millennium Stage; at the Ulster American Folk Park in Omagh, Northern Ireland; and  the Ryman Auditorium to name a few!  Robert began his performing career in ballet. A knee injury led him to theater as a multifaceted actor. Then he turned to directing, with a specialty in developing one-person shows. His co-creations include The Diary of Opal Whitely, starring Nan Gurley, author and Dove Award Winner. They toured the show for nine years, including three weeks at the Piccolo Spoleto Festival in Charleston. Roberts other works have been seen in K-12 schools, colleges and universities, and in arts centers around the country.

The Show: On July 4, 1989, 44 years after the end of his war, Lieutenant Herschel Ponder sat down at his kitchen table to write his war memoir. He began with a dedication to his three daughters, “I had a sudden urge to tell you about my war, World War II and the subsequent coping, my peace.”  Carol Ponder, Herschel’s middle daughter, with her husband, Robert, have adapted her father’s memoir into a two-person performance created in the great tradition of storytelling and song from Carol's family home in the Appalachian Mountains of Western North Carolina. This story describes his fears, his joys, and his struggle to remain human during and after an inhumane war; but his story is not just about WWII. It’s about going to war and coming home again. His memoir, a historical document, is a story for all generations!

August 24, 2016
"The Tennessee Higher Education Commission (THEC) announced the six campuses receiving nearly $1 million in funds through the 2016 Veteran Reconnect grant program. The grant is part of the State of Tennessee's larger efforts to support and encourage adult learners, many of whom are veterans, studying at Tennessee institutions."

"Through Veteran Reconnect, Middle Tennessee State University will enhance the services offered to veteran students and their families through the Charlie and Hazel Daniels Veterans and Family Military Center. Specific initiatives include funding for a full-time transition manager to work with veteran students as they transition into the university, as well as travel for the position and the Center’s employer search agent. Additionally, the Center will hire a graduate assistant to focus on outreach to veterans on campus through communications and social media. Funds will also go to support students attending veteran-related conferences." - State of Tennessee Higher Education Commission Press Release

August 23, 2016
With the unveiling of a plaque and a new logo for MTSU’s Charlie and Hazel Daniels Veterans and Military Family Center named for them, MTSU formally recognized the couple and The Journey Home Project he co-founded to assist veterans during a Tuesday, Aug. 23, celebration at the Miller Education Center on Bell Street. Charlie and Hazel both received honorary Blue Raider jerseys, of which were given to them by senior Blue Raider Athletics footballer and student veteran Steven Rhodes.
Written by: Randy Weiler

MTSU President Sidney A. McPhee, left, first lady Elizabeth McPhee, Hazel Daniels, Charlie Daniels and Keith M. Huber, senior adviser for veterans and leadership initiatives, display the new Charlie and Hazel Daniels Veterans and Military Family Center logo unveiled in an Aug. 23 celebration. The event recognized the couple and The Journey Home Project for gifts totaling $120,000 for the center. Daniels autographed the patriotic fiddle McPhee is holding and presented it to the center as a gift from him and the foundation.

Click here to read the full story about the Unveiling Ceremony

August 17, 2016
New and returning MTSU student veterans and their families attended a “newcomers briefing” provided by the Charlie and Hazel Daniels Veterans and Military Family Center. The briefing was a veterans’ orientation for them and their families, enabling them to find campus resources. The agenda included: 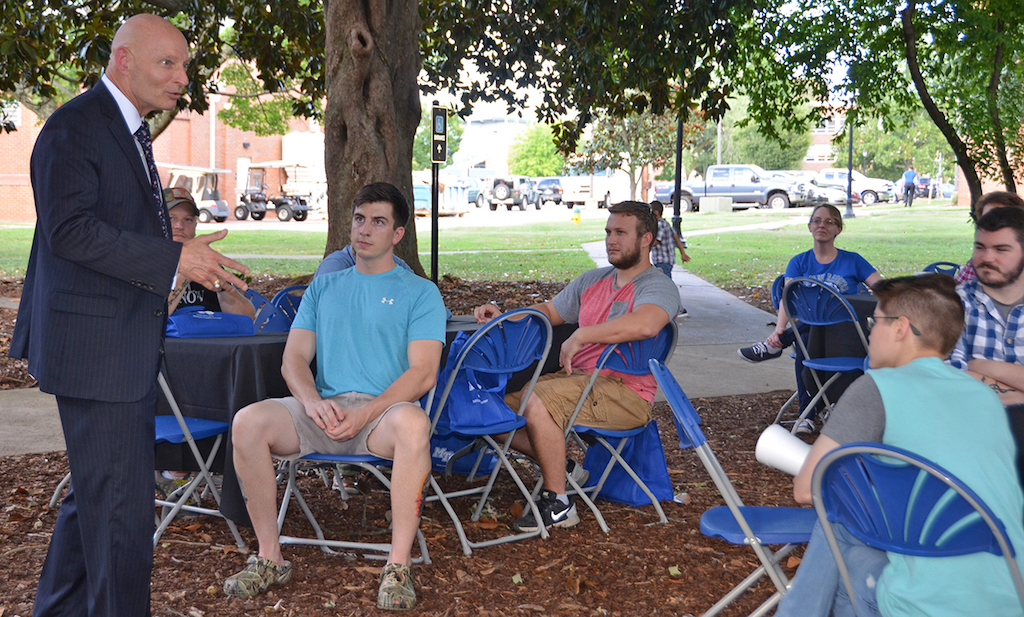 Keith M. Huber, left, MTSU senior advisor for veterans and leadership initiatives, welcomes all student veterans and their family members to campus and the Charlie and Hazel Daniels Veterans and Military Family Center during the newcomers orientation. Click here for more pictures from the newcomers briefing.

Click here to read the full story about the newcomers briefing


Click here to read the full story about the Stole Ceremony

June 6, 2016
"Almost 100 cadets from the Tennessee Wing Civil Air Patrol are spending the week on the MTSU campus for the U.S. Air Force auxiliary’s weeklong annual training encampment. The cadets, ranging in age from 12 to 21, are living in campus residence halls, attending special presentations by the university on aerospace and leadership and learning military drill and customs during the encampment. It is the first time the Tennessee Wing has held its annual training for cadets on a university campus." 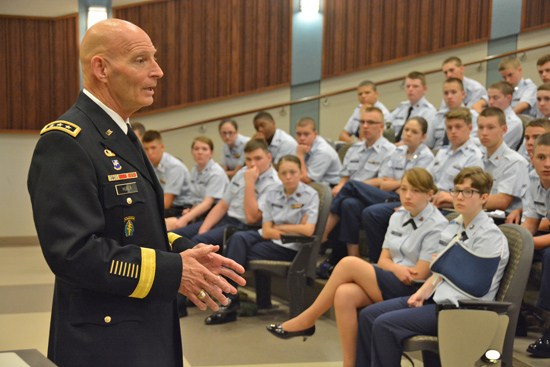 Click here to read the full story about the cadet training

June 3, 2016
"Using prose and poetry to bridge the civilian / military divide? United States Marine Corps veteran and recent MTSU graduate Sean Martin shares how fellow students at the MTSU Veterans and Military Family Center and Writer Corps helped him find community and a renewed sense of purpose. This video from NPT kicks off a new round of stories for the national public media series Veterans Coming Home. Look out for more stories striving to connect civilians and veterans, break down stereotypes and broaden our sense of what it means to serve at http://veterans.wnpt.org/"

June 1, 2016
"A partnership between MTSU and the local VA facility in support of student veterans has earned national honors from the U.S. Department of Veterans Affairs. Tennessee Valley Healthcare System teamed up with MTSU to provide comprehensive VA benefits and health care services to student veterans. VA staffers have offices in the veterans center, which is located inside MTSU’s Keathley University Center in the heart of the campus, and veterans can stop in anytime to see trained staff about their mental health care, education and other VA health care services and benefits." For the full story, visit MTSU News. You can also visit the Daily News Journal for more information.

April 28, 2016
MTSU President Sidney A. McPhee held a private dinner with Charlie and Hazel Daniels at his residence April 26, 2016. That evening he announced the new naming of the Veterans and Military Family Center for Charlie and his wife. 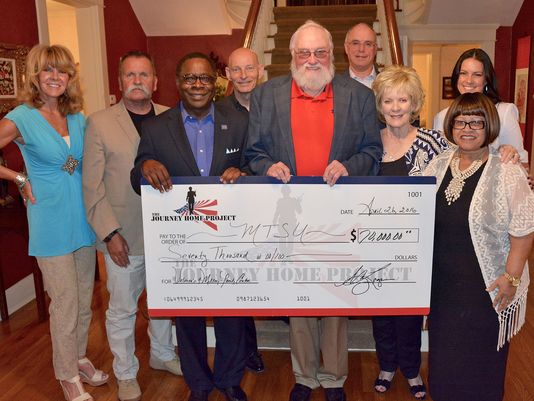 Charlie Daniels and his wife, Hazel, along with the directors of The Journey Home Project, present a $70,000 check to MTSU President Sidney A. McPhee to support the Veterans and Military Family Center after a dinner April 26, 2016 at the President's Residence. The project has donated $120,000 to the center since it opened in November 2015.  (Photo: Andrew Oppmann)