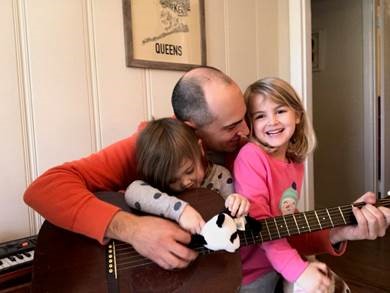 Dr. Trevor de Clercq is an associate professor in the Department of Recording Industry, where he serves as coordinator for the musicianship curriculum and teaches classes in music technology and audio theory.

He has previously taught at Ithaca College, Hofstra University, Adelphi University, the Eastman School of Music, and the University of Rochester.

He is a prolific researcher and writer, so a list of his publications and presentation is too long to include here. But I am sure if you ask him for a link to his work, he will gladly share!

Trevor, who is a songwriter who has self-published 10 albums of his songs, has written music for film, stage and radio, including works for NPR and PRI. His rendition of “Silent Night” was included as diegetic music in the film Fahrenheit 9/11. He plays piano, guitar, bass and cello, and knows his way around a banjo and mandolin.

He spoke to Beverly Keel about his research, publications and online teaching.